Dominion of Newfoundland
This article is about the historical state. For the province that followed it, see Newfoundland and Labrador.

The Newfoundland Blue Ensign, colonial flag from 1870 to 1904

In 1854 the British government established Newfoundland's responsible government.[4] In 1855, Philip Francis Little, a native of Prince Edward Island, won a parliamentary majority over Sir Hugh Hoyles and the Conservatives. Little formed the first administration from 1855 to 1858. Newfoundland rejected confederation with Canada in the 1869 general election. Prime Minister of Canada Sir John Thompson came very close to negotiating Newfoundland's entry into confederation in 1892.

It remained a colony until acquiring dominion status in 1907.[5]

First World War and after 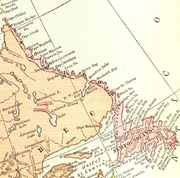 Map of Newfoundland in 1912

Newfoundland's own regiment, the 1st Newfoundland Regiment, fought in the First World War. On July 1, 1916, the German Army wiped out most of that regiment at Beaumont Hamel on the first day on the Somme, inflicting 90 percent casualties. Yet the regiment went on to serve with distinction in several subsequent battles, earning the prefix "Royal." Despite people's pride in the accomplishments of the regiment, Newfoundland's war debt for the regiment and the cost of maintaining a trans-island railway led to increased and ultimately unsustainable government debt in the post-war era.

In the 1920s, political scandals wracked the dominion. In 1923, the attorney general arrested Newfoundland's prime minister Sir Richard Squires on charges of corruption. Despite his release soon after on bail, the British-led Hollis Walker commission reviewed the scandal. Soon after, the Squires government fell. Squires returned to power in 1928 because of the unpopularity of his successors, the pro-business Walter Stanley Monroe and (briefly) Frederick C. Alderdice (Monroe's cousin), but found himself governing a country suffering from the Great Depression.

The Judicial Committee of the Imperial Privy Council resolved Newfoundland's long-standing Labrador boundary dispute with Canada to the satisfaction of Newfoundland and of Canada (but not of Quebec, the province that bordered Labrador) with a ruling on April 1, 1927. Prior to 1867, the Quebec North Shore portion of the "Labrador coast" had shuttled back and forth between the colonies of Lower Canada and Newfoundland. Maps up to 1927 showed the coastal region as part of Newfoundland, with an undefined boundary. The Privy Council ruling established a boundary along the drainage divide separating waters that flowed through the territory to the Labrador coast, although following two straight lines from the Romaine River along the 52nd parallel, then south near 57 degrees west longitude to the Gulf of Saint Lawrence. Quebec has long rejected the outcome, and Quebec's provincially issued maps do not mark the boundary in the same way as boundaries with Ontario and New Brunswick. 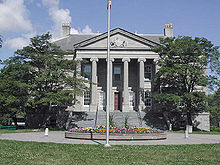 Not surprisingly for a small country which relied primarily upon the export of fish, paper and minerals, the Great Depression hit Newfoundland very hard. Economic frustration combined with anger over government corruption led to a general dissatisfaction with democratic government. On April 5, 1932, a mob of 10,000 people marched on the Colonial Building (seat of the House of Assembly) and forced prime minister Squires to flee. Squires lost the election held later in 1932. The next government, led once more by Alderdice, called upon the British government to take direct control until Newfoundland could become self-sustaining. The United Kingdom, concerned over Newfoundland's likelihood of defaulting on its war-debt payments, established the Newfoundland Royal Commission, headed by a Scottish peer, William Mackenzie, 1st Baron Amulree. Its report, released in 1933, assessed Newfoundland's political culture as intrinsically corrupt and its economic prospects as bleak, and advocated the abolition of responsible government and its replacement by a Commission of the British Government. Acting on the report's recommendations, Alderdice's government voted itself out of existence in December 1933.[6]

In 1934, the Dominion suspended Newfoundland's self-governing status and the Commission of Government took control. Newfoundland remained a dominion in name only.[2] A severe depression persisted until the Second World War broke out in 1939.

Given Newfoundland's strategic location in the Battle of the Atlantic, the Allies (especially the United States of America) built many military bases there. Large numbers of unskilled men gained the first paychecks they had seen in years by working on construction and in dockside crews. National income doubled overnight as an economic boom took place in the Avalon Peninsula and to a lesser degree in Gander, Botwood, and Stephenville. The United States became the main supplier, and American money and influence diffused rapidly from the military, naval, and air bases. Prosperity returned to the fishing industry by 1943. Government revenues, aided by inflation and new income, quadrupled, even though Newfoundland had tax rates much lower than those in Canada, Britain, or the United States. To the astonishment of all, Newfoundland started financing loans to London. Wartime prosperity ended the long depression and reopened the question of political status.

The American Bases Act became law in Newfoundland on 11 June 1941. As Earle (1998) finds, Newfoundland girls married American personnel by the thousands, "the Yanks' jaunty manner and easy social ways making an often stark contrast to the Canadian servicemen who at this time began to coin the epithet 'Newfie.'" The American connection worked so well that the Canadian government in Ottawa became alarmed. A new political party formed in Newfoundland to support closer ties with the U.S., the Economic Union Party, which Earle characterises as "a short-lived but lively movement for economic union with the United States". Advocates of union with Canada denounced the Economic Union Party as republican, disloyal and anti-British; Britain refused to allow the voting populace the option to choose union with the U.S., and the U.S. State Department, needing British and Canadian cooperation during the Second World War, decided not to interfere.[7]

Following the Second World War, in 1946, an election took place to determine the membership of the Newfoundland National Convention, charged with deciding the future of Newfoundland. The Convention voted to hold a referendum to decide between continuing the Commission of Government or restoring responsible government. Joseph R. Smallwood, the leader of the confederates, moved for the inclusion of a third option — that of confederation with Canada. The Convention defeated his motion, but he did not give up, instead gathering more than 5,000 petition signatures within a fortnight, which he sent to London through the governor. The United Kingdom, insisting that it would not give Newfoundland any further financial assistance, added this third option of having Newfoundland join Canada to the ballot. After much debate, an initial referendum took place on June 3, 1948, to decide between continuing with the Commission of Government, reverting to dominion status, or joining the Canadian Confederation. Three parties participated in the referendum campaign: Smallwood's Confederate Association campaigned for the confederation option while in the anti-confederation campaign Peter Cashin's Responsible Government League and Chesley Crosbie's Economic Union Party (both of which called for a vote for responsible government) took part. No party advocated petitioning Britain to continue the Commission of Government.

The Newfoundland dollar bill issued in 1920 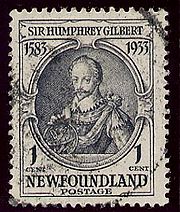 The result proved inconclusive, with 44.5 percent supporting the restoration of dominion status, 41.1 percent for confederation with Canada, and 14.3 percent for continuing the Commission of Government. Between the first and second referendums, rumour had it that Catholic bishops were using their religious influence to alter the outcome of the votes. The Orange Order, incensed, called on all its members to vote for confederation, as the Catholics voted for responsible government. The Protestants of Newfoundland outnumbered the Catholics by a ratio of 2:1. Some commentators believe that this sectarian divide greatly influenced the outcome of the second referendum. A second referendum on July 22, 1948, which asked Newfoundlanders to choose between confederation and dominion status, produced a vote of 52 percent to 48 percent for confederation, and Newfoundland joined Canada on March 31, 1949.

Not everyone accepted the results, however. Peter John Cashin, an outspoken anti-Confederate, questioned the validity of the votes. He claimed that an "unholy union between London and Ottawa" brought about confederation.[citation needed]

Political parties in the Dominion of Newfoundland