This article is not to be confused with the Unfederated Malay States.

The Federated Malay States (FMS) was a federation of four protected states in the Malay Peninsula—Selangor, Perak, Negeri Sembilan and Pahang—established by the British government in 1895, which lasted until 1946, when they, together with the Straits Settlements and the Unfederated Malay States, formed the Malayan Union. Two years later, the Union became the Federation of Malaya and finally Malaysia in 1963 with the inclusion of Sabah (then North Borneo), Sarawak and Singapore.

The United Kingdom was responsible for foreign affairs and defence of the federation, whilst the states continued to be responsible for their domestic policies. Even so, the British Resident General would give advice on domestic issues, and the states were bound by treaty to follow that advice. The federation had Kuala Lumpur, which was then part of Selangor, as its capital. The first FMS Resident General was Sir Frank Swettenham.

The federation along with the other Malay states of the peninsular and British possessions was overrun and occupied by the Japanese. After the liberation of Malaya due to the Japanese surrender, the federation was not restored. However, the federal form of government was retained as the principal model for consolidating the separate States as an independent Federation of Malaya and the Federation's later evolution into Malaysia.

Although the Resident General was the real administrator of the federation, each of the four constituent states of the federation retained their respective hereditary rulers (sultans). At the formation of the Federated Malay States, the reigning sultans were:

In 1897 the first Durbar was convened in the royal town of Kuala Kangsar, Perak as the platform for discussions for the four Rulers. This formed the basis for the Conference of Rulers that was created later on under Article 38 of the Malaysian Constitution on August 27, 1957.

Flag and emblem of the Federation

The Federated Malay States had a flag of its own until its dissolution in 1946. The flag consisted of four different-colored stripes, namely, from top to bottom, white, red, yellow and black. Combination of any color represents the four states that formed the FMS - red, black and yellow are for Negeri Sembilan; black and white for Pahang; black, white and yellow for Perak; and red and yellow for Selangor. The same design concept is used in Malaysian national emblem. In the middle is an oblong circle with a Malayan tiger in it.

The National History Museum located near the Dataran Merdeka in Kuala Lumpur, Malaysia, has a replica of the federation's flag.

The coat of arms of the Federated Malay States featured a shield guarded by two tigers. On the top of the shield is the crown (known as Eastern Crown in English heraldry), as symbol of the federation of monarchies under the protection of the United Kingdom. A banner with the phrase "Dipelihara Allah" (Under God's (Allah) Protection) written in Jawi is located underneath the shield.

This design forms the basis of the Federation of Malaya's (later Malaysia) national emblem with the guardian tigers element and a quartered shield of four colours (white, red, yellow and black) in the central part of the shield representing the Federated Malay States.

The phrase "Dipelihara Allah" was also adopted as the current state motto for the state of Selangor.

In addition to a state flag, the Federated Malay States also had a naval jack or ensign for use on government ships. The ensign, with the four colors of the FMS, was flown by HMS Malaya (commanded by Captain Boyle under the 5th Battle Squadron of the British Grand Fleet) during the Battle of Jutland in the North Sea, which was the largest and the only full scale clash of battleships during World War One.

The Treaty of Federation and Administration 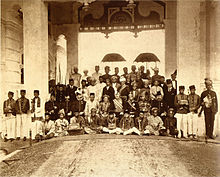 The protectorate of the Federated Malay States was established after the four Rulers of Selangor, Perak, Negeri Sembilan and Pahang agreed to a federation and centralized administration in 1895 and in which the Treaty of Federation was drawn up and signed on the 1st of July 1896. By this treaty and the previous acceptance of the British Residents System in Selangor (1875), Perak (1874), Negeri Sembilan (1873) and Pahang (1888); the FMS were officially turned into a nominally independent protectorate of Great Britain (not to be confused with the British possessions like the territories of the Straits Settlements

With the Treaty of Federation the Malay Rulers effectively gave up their political power in their states, having to act after consulting and only with the due consent of their respective Residents. However, the United Kingdom pledged not to interfere in matters relating to native Malay traditions and Islamic affair.

Structure of the Federated Malay States

A well-ordered system of public administration was established, public services were extended, and large-scale rubber and tin production was developed. This control was interrupted by the Japanese invasion and occupation from 1941 to 1945 during World War II.

The British established the Federal Council in 1889 to administer the FMS. It was headed by the High Commissioner (The Governor of the Straits Settlement), assisted by the Resident-General, the Sultans, the four state Residents and four nominated unofficial members. This structure remained until the Japanese invaded Malaya on 8 December 1941.

From 1896 to 1936, real power lay in the hands of the Resident-General, later known as Chief Secretary of the Federation.

Chief Secretary to the Government

After 1936 the Federal Secretaries were no more than coordinating officers, under the authority of the High Commissioners, which are always the Governors of the Straits Settlements

In the Federated Malay States, the individual State were still ruled by the Sultan but was now advised by the State Council for the purpose of administrating the State. The State Council was made up of the Resident (or in certain cases by the Secretary to the Resident), native chiefs, and representative(s) of the Chinese community nominated by the Sultan. The council discussed matters of interest for each respective state such as legislative and administrative issues as well as revision of all sentence of capital punishment. The Resident and his staff (mostly consist of European and Malay) carried on with the administrative work.

Notes:
The territories of Dinding and Pangkor Island was ceded to the British, administered as part of the Straits Settlement. Returned to the government of Perak in 1935.

Notes:
Tanjung Tuan (also known as Cape Rachado) was a Dutch possession (originally Portuguese before 1641), passed to the British in 1824. Administered as an exclave of Malacca until today.

The Federated Malay States as a forerunner to Malaysia 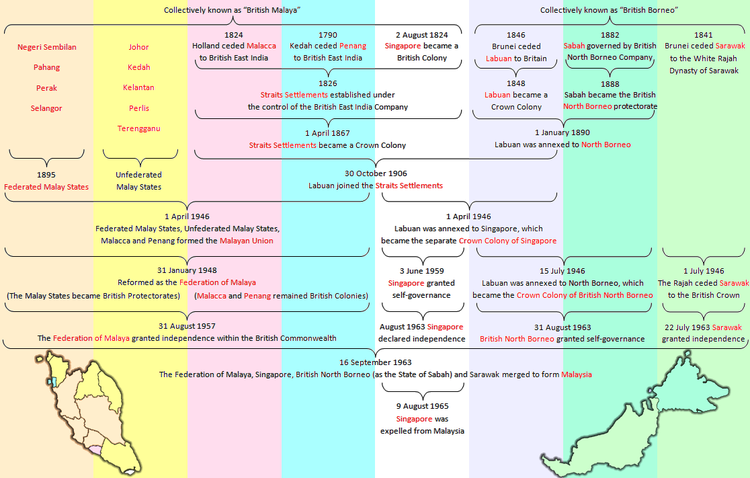 The Federated Malay States main economic activity was mostly focused on agriculture and mining with emphasis on rubber and tin. FMS and Malaya as a whole was the main supplier of these two commodities for the British industrial need. Rubber estates or plantations were established in all four states and tin was mined primarily in the Klang valley in Selangor and the Kinta valley in Perak. This labor intensive economic activities prompted the British to bring in immigrant workers from Southern India to work at the plantations and workers from Southern China to mine the tin.

The economic condition in the period can be viewed as self-sustainable, as the income of the federation was more than what was expended in terms of maintaining the administration and economic activities. In the later period, a lot of resources was poured into the development of the city of Kuala Lumpur, as the capital of the federation. This period also saw rapid growth in terms of communications infrastructure such as interstate roads, a narrow gauge railway line from Penang to Singapore, and the Port Swettenham (present day Port Klang). Public schools and academic institutions were also opened along with an improvement in public health. An area in the city was also gazetted as a settlement for the Malay called Kampung Baru. Public buildings were also constructed such as the Kuala Lumpur railway station, the Bangunan Sultan Abdul Samad complex and Masjid Jamek.

The table and section below illustrated the economic growth of the federation and its member states.

Note: All values are in Straits Dollar (One dollar fixed at two shillings and four pence sterling). Data for Pahang included only from 1890 onwards

WWI and the FMS

With the threat of Germany, the British Navy was in a drive for expansion. As a contribution, the Government and people of the Federated Malay States; agreed to finance the commissioning of HMS Malaya in a motion proposed in the Federal Council by His late Highness the Sultan of Perak in 1913, supported by His late Highness the Sultan of Selangor. The battleship which cost $25,000,000 (approximately £2,945,709) was one of five of the "Queen Elizabeth"' Class, displacing 31,000 tons, mounting fifteen-inch (381 mm) guns and capable of 25 knots (46 km/h). The most modern ships of their day, they formed the 5th Battle Squadron and fought as such at Jutland in 1916. HMS Malaya was also refurbished and was in service throughout World War Two.

All of Malaya including Singapore remained under Japanese occupation until the surrender of the Japanese home islands.

After the war the federation was dissolved formally on 1 April 1946, and was incorporated into the Malayan Union thereafter. It will be preceded by the Federation of Malaya in 1948 and gain independence in 1957.

While the four states issued their own postage stamps as before, there were additional issues for the Federated States as a whole.

The Federated Malay States was also within the flight path of American aviator, Amelia Earhart, on her Thailand - Singapore leg during her final and fatal attempt to cross the globe in 1937. Permission to enter the FMS airspace with provision to land in Taiping Airport was given on 7 June 1937.