Politics of the Czech Republic

Politics of the Czech Republic

Politically, the Czech Republic is a multi-party parliamentary representative democratic republic. According to the Constitution of the Czech Republic, the President is the head of state while the Prime Minister is the head of government, exercising supreme executive power. The Legislature is bicameral, with the Chamber of Deputies (Poslanecká sněmovna) and the Senate (Senát).

The Czech political scene supports a broad spectrum of parties ranging from Communist Party on the far left to various nationalistic parties on the far right. Generally, the (liberal) right beyond the specific case of huge and conservative Civic Democratic Party is splintered and has failed in several attempts to unite.

Czech voters returned a split verdict in the June 2002 parliamentary elections, giving Social Democrats (ČSSD) and Communists majority, without any possibility to form a functioning government together due to Vladimír Špidla's strong anticommunism. The results produced a ČSSD coalition government with Christian Democrats (KDU-ČSL) and Liberals (US-DEU), while Civic Democrats (ODS) and Communists (KSČM) took place in opposition. The MP ratio was the tiniest 101:99. After many buffetings and, finally, after the catastrophic results of the June European Parliament election, 2004 Špidla resigned after a revolt in his own party and the government was reshuffled on the same basis. 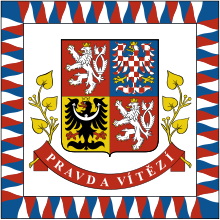 Flag of the Czech president

As the system in Czech repeatedly produces very weak governments (a specific problem is that about 15% of the electorate support the Communists, who are shunned by all the other parties) there is constant talk about changing it but without much chance of really pushing the reform through. An attempt to increase majority elements by tweaking the system parameters (more smaller districts, d'Hondt method used) by ČSSD and ODS during their "opposition agreement" 1998–2002 was vehemently opposed by smaller parties and blocked by the Constitutional Court as going too much against the constitution-stated proportional principle; only a moderated form was adopted. This, however led to a stalemate in 2006 elections where both the left and the right each gained exactly 100 seats; as many commenters point out, the earlier system would have given the right 3–4 seats majority.

In March 2006, the parliament overturned a veto by President Václav Klaus, and the Czech Republic became the first former communist country in Europe to grant legal recognition to same-sex partnerships.

A government formed of a coalition of the ODS, KDU-ČSL, and the Green Party (SZ), and led by the leader of the ODS Mirek Topolánek finally succeeded in winning a vote of confidence on 19 January 2007. This was thanks to two members of the ČSSD, Miloš Melčák and Michal Pohanka, who abstained.

On 23 March 2009, the government of Mirek Topolánek lost a vote of no-confidence. 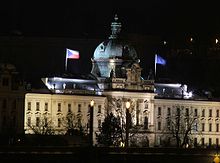 The President of the Czech Republic is elected by collective session of the parliament for five-year term (no more than two consecutive). The president is a formal head of state with limited specific powers, most importantly to return laws to the parliament, nominate Constitutional Court judges for Senate's approval, and dissolve the parliament under certain special and rare conditions. He also appoints the prime minister as well the other members of the cabinet on a proposal by the prime minister. Václav Klaus, now President of the Czech Republic, former Prime Minister and chairman of Civic Democrats (ODS) remains one of the country's most popular politicians.

The Prime Minister is the head of government and wields considerable powers, including the right to set the agenda for most foreign and domestic policy, mobilize the parliamentary majority, and choose governmental ministers. 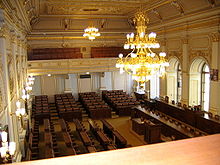 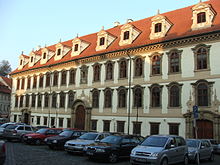 Wallenstein Palace – Seat of the Senate in Prague

The Parliament (Parlament České republiky) has two chambers. The Chamber of Deputies (Poslanecká sněmovna) has 200 members, elected for a four year term by proportional representation with a 5 % election threshold. There are 14 voting districts identical to the country's administrative regions. The Chamber of Deputies, at first the Czech National Council, has the powers and responsibilities of the now defunct federal parliament of the former Czechoslovakia.

The Senate (Senát) has 81 members, in single-seat constituencies elected by two-round runoff voting for a six-year term, with one third renewed every even year in the autumn. The first election was 1996 (for differing terms). This is patterned after the U.S. Senate but each constituency is of (roughly) same size and the system used is two-round runoff voting. The Senate is unpopular among the public and suffers from low election turnout (overall roughly 30% in the first round, 20% in the second).