The Renaissance Mydlářs House - today a museum of puppetry 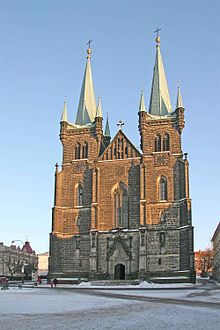 Chrudim (Czech pronunciation: [ˈxruɟɪm]) is a city in eastern Bohemia, in the Pardubice region of the Czech Republic.

The oldest archaeological findings which provide first signs of the settlement in this area date back to the 5th millennium BC. Various cultures succeeded one on another in the territory of today’s town of Chrudim and its vicinity. Chrudim town was established before 1276 and soon after became to be a dowry town of Bohemian Queens.

During the reign of Maria Theresa, Chrudim became the centre of the region and, in 1751, the seat of regional offices. The town was not only the natural but also the administrative centre of Chrudim region. The 18th and especially the 19th centuries brought vigorous development. The medieval ground plan of the historical heart of the town and its suburbs were no longer able to meet the growing requirements. The population reached 13,000 inhabitants at the end of the 19th century. The first industrial factory, with its foundry and forge, and a shoe factory launched industrial development. Social life also greatly expanded in the second half of the 19th century. Remarkable number of schools and cultural and social events led Chrudim to well-known as “Athens of Eastern Bohemia”.