Cheb (Czech pronunciation: [ˈxɛp]; German: Eger) is a city in the Karlovy Vary Region of the Czech Republic, with about 33,000 inhabitants. It is situated on the river Ohře (also called Eger in German), at the foot of one of the spurs of the Smrčiny and near the border with Germany. Prior to 1945, the town was the centre of the German-speaking region known as Egerland, and was part of the Northern Austro-Bavarian dialect area.

The name of the city was in 1061 recorded as Egire; in 1179 it was known as Egra; from 1322 as Eger and the surrounding territory as Regio Egere and Provincia Egrensis; after the 14th century also as Cheb or Chba. From 1850 it was given the twin official names of Eger and Cheb.

The twin towns of Cheb are Hof in Germany, Rheden in the Netherlands and Nizhny Tagil in Russia. 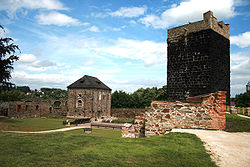 Cheb castle with the Black tower

The first known settlement in the area was a Slavic stronghold at what is now called Jánský Vrch, north of the town-centre. In 807 the district of today's Cheb was included in the new margraviate of East Franconia, which belonged at first to the Babenbergs, but from 906 to the counts of Vohburg, who took the title of margraves. In 1179 town status was achieved, and the castle was built in the 12th century. In 1149, by the marriage of Adela of Vohburg to the emperor Frederick I, Eger (Cheb) came into the possession of the House of Swabia, and remained in the hands of the emperors until the early 13th century, during which time it became an Imperial Free City.

In 1265 it was taken by the king Ottokar II of Bohemia, who retained it for eleven years. After being repeatedly transferred from the one power to the other, according to the preponderance of Bohemia or the empire, the town and territory were finally incorporated into Bohemia in 1322, under John of Bohemia. Several imperial privileges, however, continued to be enjoyed by the town until 1849.

On 5 May 1389, during a Reichstag between King Wenceslaus and a group of Imperial Free Cities of south-west Germany, the Peace of Eger was agreed upon, after Wenceslaus had failed to secure his interests in the city.

It suffered severely during the Hussite Wars, during the Swedish invasion in 1631 and 1647, and in the War of the Austrian Succession in 1742. In 1634, during the Thirty Years' War, Albrecht von Wallenstein was killed here. George of Podebrady (the main square is named after him) married his daughter and farthered two sons in the city. From the Middle Ages until 1945, the lands around the town were known by the German name Egerland.

In 1723, Cheb became a free royal town. The northern quarter of the town was devastated by a large fire in 1809, and many middle-age buildings were irreplaceably destroyed. Until 1851, the renowned spa-town of Františkovy Lázně belonged to the Magistrate of Cheb. The carbonated mineral water coming from these springs was delivered to spa visitors residing in Cheb. 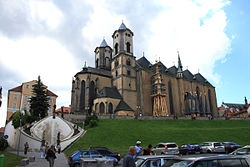 Geographers of the Austro-Hungarian monarchy proclaimed the nearby 939m high Tillen (Dileň in Czech) as the geographical centre of Europe. This claim was documented on a copper plaque mounted at the summit.

Austrian National Socialism and hence German National Socialism can trace its origins to Cheb when Franko Stein transferred a small newspaper (Der Hammer) from Vienna to Cheb in 1897. There he organized a German workers congress called the Deutschvölkischer Arbeitertag, which published the 25-point program. 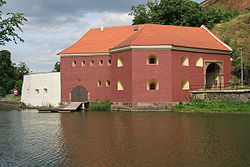 The terms of the 1919 Treaty of St. Germain triggered civil unrest between the Sudeten German population and the new Czechoslovak administration, just as in the rest of the Sudetenland. As elsewhere, protests in the town - now officially named Cheb - were eventually suppressed by force.

On 3 October 1938, the town was visited by Adolf Hitler; shortly afterwards German troops marched into the Sudetenland and seized control. From 1938 until 1945 the town was annexed to Germany. On 1 May 1939, the town split away from the surrounding district to form its own municipal district together with the settlement of Matzelbach, and gave its name to the most westerly of the three administrative regions of the Sudetenland. The administrative seat of the Regierungspräsident lay in Karlsbad, however.

After the end of World War II the region was returned to Czechoslovakia. Under the Beneš decrees of the same year, the German-speaking majority of the town was dispossessed of their homes and property, and was forcibly expelled from the country. In 1954, the town of Amberg in Germany adopted the expelled Sudeten German population from Cheb and the surrounding districts.

On 24 August 2001, German Chancellor Gerhard Schröder and Czech Prime Minister Miloš Zeman visited the Euregio Egrensis (a cross-border initiative between districts in Bavaria, Saxony, Thuringia and Bohemia), and received the Freedom of the City of Cheb.

In 2004, a town-twinning agreement was made with Hof in Bavaria. Since the fall of the Iron Curtain, Cheb has also had cordial relationships with the neighbouring German towns of Waldsassen and Marktredwitz.

The current population includes a large group of Vietnamese, whose families were invited to the country as guest workers during the Communist era, and Roma, who were resettled after the Second World War. 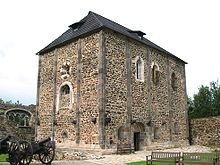 Chapel of St Erhard and Urshula at the castle

On the rock, to the north-west of the city center, lies Cheb castle, built in the 12th century, and now mostly in ruins. The main attractions are the Chapel of St Erhard and Ursula, the Black Tower and the ruins of a palace; all from around 1180. The chapel has two stories; the lower storey is in Romanesque style, while the upper storey is Gothic. An eight-cornered opening connects the two storeys. The upper-storey contains a ribbed vault supported on four polygonal columns with statues depicting sins, including a statue of a prostitute and Onan. In the banquet room of this castle, Wallenstein's officers Terzky, Kinsky, Illo and Neumann were assassinated on February 25, 1634. Wallenstein himself was murdered few hours later by Captain Devereux in the burgomaster's house at the main square. The house, a 15th century gothic town hall (Pachelbel House), was transformed in 1872, it contains many historical relics and antiquities of the town of Cheb. 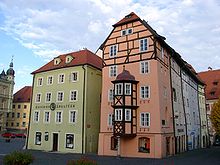 On the Market Place dating from the 13th century are a group of houses originating from the late-Gothic period known as Špalíček. This distinctive feature of the market place is a bizarre complex of eleven houses. The outline of the two blocks can still be seen on the oldest existing records of 1472.

The Church of St. Nicholas was established in the 13th century as a three-naved basilica, of which the western portal and the lower part of the tower remain in place. The three-part nave, presbytery and sacristy stem from the Gothic era. After the fire of 1742, the tower was rebuilt with a baroque cupola, after the design of the indigenous architect Balthasar Neumann. The top of the twin steeples were destroyed by German artillery fire during World War II and restored in summer 2008.

The Franciscan Church is located in the town center. The Church of St. Clara was built between 1708 and 1711 according to a design of Christoph Dientzenhofer.

The three world-renowned spa-towns of Karlovy Vary (Karlsbad), Marianské Lázně (Marienbad) and Františkovy Lázně (Franzensbad) are located only a few kilometres away from Cheb. The German state of Bavaria is easily reached by car via the Svatý Kříž-Waldsassen border-crossing, while the musically renowned areas of Saxon Vogtland can be accessed via the Kraslice-Klingenthal and Vojtanov-Schönberg crossings. For walkers, wheelchair-users and cyclists, border crossings are present going into Bavaria (Aš-Rehau) and Saxony (Bad Brambach-Plesná, Bad Brambach-Vernéřov, Bad Elster-Podhradí, Markneukirchen-Luby and Hranice-Ebmath).

The early-baroque Church of Maria Loreto in Starý Hroznatov is situated 5 km from Cheb. The annex, which had lain in ruins since 1990 has since been renovated through the initiative of an inhabitant of the neighbouring town Waldsassen. 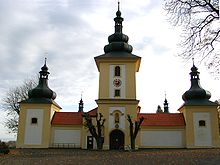 Notable in this area are several timbered houses in the sparsely populated villages, particularly in Doubrava.

Eight kilometres north-east of Cheb, near the district of Nový Drahov is the popular Soos nature reserve. The reserve consists of peat moors and springs, with gas-producing mofettes. Cheb Airport, the oldest airport in the country, is located 4,5 km south-east.

Attractions near the Bavarian border include the Komorní hůrka and Železná hůrka. These are remains of the most recent Czech volcanoes, which now form the basis of a nature reserve. This area was researched by Goethe.

For watersports enthusiasts, two reservoirs are of interest - Skalka (north-east of Cheb and fed by the Ohře River) and Jesenice (south-east of Cheb).

The following links are in German, and were sources used in this article