Mathura
This article is about the municipality in Uttar Pradesh, India. For its namesake district, see Mathura district.
For other uses, see Mathura (disambiguation).

pronunciation (help·info)) is a city in the North Indian state of Uttar Pradesh. It is located approximately 50  km north of Agra, and 145 km south-east of Delhi; about 11 kilometers from the town of Vrindavan and 22 kilometers from Govardhan. It is the administrative centre of Mathura District of Uttar Pradesh. During the ancient period, Mathura was an economic hub, located at the junction of important caravan routes.

Mathura is the birthplace of Lord Krishna at the centre of Braj or Brij-bhoomi, called Shri Krishna Janma-Bhoomi, literally: 'Lord Krishna's birth place'.

The Keshav Dev temple was built in ancient times on the site of Krishna's legendary birthplace (an underground prison). According to the Mahabharata and Bhagavata Purana epics, Mathura was the capital of the Surasena Kingdom, ruled by Kansa the maternal uncle of Krishna. 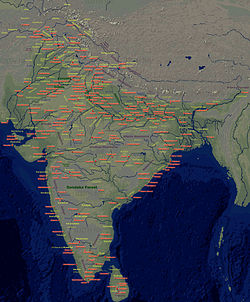 Ancient Indian (Bharata) cities and Places (Title and location names are in English.) 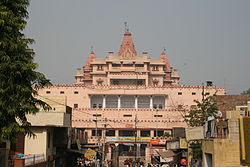 Mathura has an ancient history. According to the Archeological Survey of India plaque at the Mathura Museum, the city is mentioned in the oldest Indian epic, the Ramayana. In the epic, the Ikshwaku prince Shatrughna slays a demon called Lavanasura and claims the land. Afterwards, the place came to be known as Madhuvan as it was thickly wooded, then Madhupura and later Mathura. The demon that Shatrughan killed in Ramayana, Lavanasura was the progeny of a devout king Madhu who gets Lord Shiva's Trident in a boon in the Puranas. The Puranas ascribe the founding of the city to Ayu, the son of Pururavas and the celestial nymph Urvashi. The city might also have got its name from a famous Yadav king Madhu who reigned around 1,600 BCE.[citation needed]

In the 6th century BCE Mathura became the capital of the Surasena mahajanapada.[1] The city was later ruled by the Maurya empire (4th to 2nd centuries BCE) and the Sunga dynasty (2nd century BCE). It may have come under the control of Indo-Greeks some time between 180 BCE and 100 BCE. It then reverted to local rule before being conquered by the Indo-Scythians during the 1st century BCE. Archaeological evidence seems to indicate that, by 100 BCE, there was a group of Jains living in Mathura [Bowker].[citation needed]

Mathuran art and culture reached its zenith under the Kushan dynasty which had Mathura as one of their capitals, the other being Purushapura (Peshawar). The dynasty had kings with the names of Kujula Kadphises, Kanishka, Huvishka and Vasudeva. All the Kushans were patrons of Buddhism except Vasudeo,[citation needed] mentioned on coins as Bazodeo. Kanishka even hosted the third Buddhist council, the first two being hosted by Ajatshatru and Ashoka the Great. The headless statue of Kanishka is in the Mathura Museum.

Megasthenes, writing in the early 3rd century BCE, mentions Mathura as a great city under the name Μέθορα (Méthora).[2]

The Indo-Scythians (aka Sakas or Shakas) conquered the area of Mathura over Indian kings around 60 BCE. One of their satraps was Hagamasha, who was in turn followed by the Saka Great Satrap Rajuvula.[citation needed]

The findings of ancient stone inscriptions in Maghera, a town 17 km from Mathura, provide historical artifacts giving more details on this era of Mathura.[3] The opening of the 3 line text of these inscriptions are in Brahmi script and were translated as: "In the 116th year of the Greek kings..." [4][5]

The Mathura lion capital, an Indo-Scythian sandstone capital in crude style, dated to the 1st century CE, describes in kharoshthi the gift of a stupa with a relic of the Buddha, by Queen Nadasi Kasa, the wife of the Indo-Scythian ruler of Mathura, Rajuvula. The capital also mentions the genealogy of several Indo-Scythian satraps of Mathura.[citation needed]

Rajuvula apparently eliminated the last of the Indo-Greek kings, Strato II, around 10 CE, and took his capital city, Sagala.[citation needed]

The Mathura Lion Capital inscriptions attest that Mathura fell under the control of the Sakas. The inscriptions contain references to Kharaosta Kamuio and Aiyasi Kamuia. Yuvaraja Kharostes (Kshatrapa) was the son of Arta, as is attested by his own coins.[6]

Arta is stated to be brother of King Moga or Maues.[7] Princess Aiyasi Kambojaka, also called Kambojika, was the chief queen of Shaka Mahakshatrapa Rajuvula. Kamboja presence in Mathura is also verified from some verses of the epic, the Mahabharata, which are believed to have been composed around this period.[8] This may suggest that Sakas and Kambojas may have jointly ruled over Mathura and Uttar Pradesh. It is revealing that the Mahabharata verses only attest the Kambojas and Yavanas as the inhabitants of Mathura, but do not make any reference to the Sakas.[citation needed]

The Indo-Scythian satraps of Mathura are sometimes called the "Northern Satraps", as opposed to the "Western Satraps" ruling in Gujarat and Malwa. After Rajuvula, several successors are known to have ruled as vassals to the Kushans, such as the "Great Satrap" Kharapallana and the "Satrap" Vanaspara, who are known from an inscription discovered in Sarnath, and dated to the 3rd year of Kanishka (c 130 CE), in which they were paying allegiance to the Kushans.[9]

Mathura served as one of the Kushan Empire's two capitals from the first to the third centuries. The Mathura Museum has the largest collection of redstone sculptures in Asia, depicting many famous Buddha figurines.

Fa Xian mentions the city, as a centre of Buddhism about A.D. 400; while his successor Xuanzang, who visited the city in 634 CE, which he mentions as Mot'ulo, and said that it contained twenty Buddhist monasteries and five Brahmanical temples.[10] Later, he went east to Thanesar, Jalandhar in the eastern Punjab, before climbing up to visit predominantly Theravada monasteries in the Kulu valley and turning southward again to Bairat and then Mathura, on the Yamuna river.[11]

Sikander Lodhi earned the epithet of 'But Shikan', the 'Destroyer of Hindu deities'. The Keshav Dev temple was partially destroyed by the Mughal Emperor Aurangzeb, who built the city's Jami Masjid (Friday mosque) believed to be on the Kishnajanmabhoomi.[citation needed] It was won over from the Mughals by the Jat kings of Bharatpur but subsequently the area was passed on to the Marathas who constructed a garbh-griha shrine sharing the wall of mosque. The garbh-griha mandir is a small underground temple which houses black moorti of Laddu-Gopal. The ambience of this Krishnajanmbhoomi mandir has been made to resemble that of Prison cell. A noteworthy fact about this garbh-griha is that the wall just behind Laddu-Gopal belongs to Mosque which was constructed by Aurangzeb after destroying the ancient Keshav Dev temple. The bigger Krishna shrine, better known as Dwarkadeesh temple is a few metres away from what is believed to be the actual birthplace of Krishna, was built in 1815 by Seth Gokuldas Parikh, Treasurer of Gwalior.[citation needed] 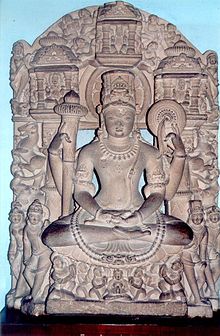 Among the "seven holy cities of India"

Moreover, Mathura is one of the seven most holy places for Hindus in India where Varanasi is considered as the holiest of the seven holy cities.

A Kṣetra is a sacred ground, a field of active power, a place where Moksha, final release can be obtained. The Garuda Purana enumerates seven cities as giver of Moksha, They are Ayodhya, Mathura, Māyā, Kāsi, Kāñchī, Avantikā and Dvārāvatī.[14]

The city does not have an airport but a new airport is being built near Baldev. Construction is in progress with plans to open in the next five[when?] years with flights to Delhi, Mumbai, Ujjain and Varanasi.[citation needed]

There are many place of historic and religious importance in Mathura and its neighbouring towns. Most of them are linked with Hindu heritage. Major places are listed here.

A very famous twin-city to Mathura is Vrindavan. As the home of Lord Krishna in his youth, the small town is host to a multitude of temples belonging to various sects of Hinduism proclaiming Lord Krishna in various forms and Avatars. Some of the most famous temples are Banke Bihari Temple, Rang ji Temple and Iskcon Temple.

Mathura is the home for Indian I Corps (Strike Formation) [17][18] within the Indian Army's Central Command, hosting Strike I Corps headquarters in a large classified area in the outskirts of the city known as Mathura Cantonment (Central Command itself has its headquarters at Lucknow). It hosts Strike Infantry units, Air Defence units, Armoured Divisions, Engineer brigades, Aritillery Units and classified units of Strategic Nuclear Command. Corps I is primarily responsible for western borders of India. In 2007 during Exercise Ashwamedha, all the armoured, artillery and infantry divisions performed a simulation of an overall NBC (nuclear-chemical-biological) environment. The aim was to show operational ability in high intensity, short duration and 'sudden' battles.[19]

Mathura is home to the Uttar Pradesh Pandit Deen Dayal Upadhyaya Veterinary University, the first of its kind in the state and the fourth in the country to be made independent veterinary universities.[20] The University is located on the Mathura-Agra road, about 5 km from Mathura Junction. The main campus of the University is spread over a land area of 782.32 acres (3.1659 km2) in Mathura Cantt and about 1,400 acres (6 km2) at Madhurikund, about 20 km from the main campus.[citation needed]

Mathura has contributed a lot towards Indian Culture through its rich heritage. The ethos of Mathura, and in fact the whole of Braj mandal is centered on Krishna and his tales. Mathura sees heightened activities during the major festivities dedicated to Krishna.

The Braj culture has been expressed widely through various practices.

Sanjhee is the colourful art of decorating the ground with flowers.

Rasiya is a tradition that is integral to Mathura’s culture. It is the tradition of folk-songs that describe the love of the divine couple Radha and Krshnaji. It is an inseparable part of the Holi celebrations and all other festive occasions at Mathura. (Dhulendi – Holi with drums (dholak), colours, etc. originated from Braj region hundreds of millennia before today.)

Raaslilas of Mathura have become an integral part of Indian Folklore. According to popular belief, Krshnaji had danced the Raas with gopis on banks of Yamuna river.

Charkula is a traditional folk dance of the Braj. In this dance, a woman balances a column of deepikas on her head and dances to the accompaniment of Rasiya songs by the menfolk.

The language spoken in the Braj mandal is mainly Hindi which is spoken in a different dialect. This dialect is characteristic with the Braj region and known as Brajbhasha. Before Hindi and until past few centuries, Brajbhasha used to be the dominant language in literature.