Kanchipuram
This article is about the municipality in Tamil Nadu, India. For its namesake district, see Kanchipuram district. 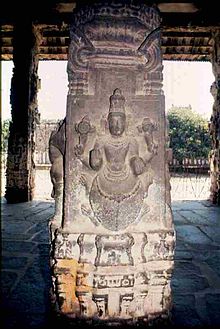 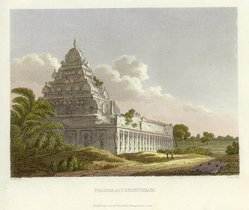 Among seven holy cities of India

Moreover, kanchi is one of seven most holy places for Hindus in India where Varanasi is considered as the holiest of the seven holy cities.

A Kṣetra is a sacred ground, a field of active power, a place where Moksha, final release can be obtained. The Garuda Purana enumerates seven cities as giver of Moksha, They are Ayodhya, Mathura, Māyā, Kāsi, Kāñchī, Avantikā and Dvārāvatī.[5]

See also: Kanchipuram in the pre-Pallava period and Kanchi Kingdom

The term "nagareshu Kanchi" in the above verse attributed the famous Sanskrit poet, Kalidasa, means that Kanchi was the best amongst the cities of medieval India.[6]

Kanchipuram is one of the oldest cities in South India, and was a city of learning for Tamil, Sanskrit, and Pali and was believed to be visited by Xuanzang (Huan Tsang) also known as Yuan Chwang. It was during the reign of Pallava dynasty, from the 4th to the 9th centuries that Kanchipuram attained its limelight. The city served as the Pallava capital, and many of the known temples were built during their reign. The founder of Zen Buddhism, Bodhidharma was born here, as was the famous Sanskrit writer Dandin who wrote Dashakumaracharita. The Sanskrit poet Bharavi hailed from Kanchi and wrote the famous Kiratarjuniya here under the patronage of the Pallava king Simhavishnu. Great Buddhist scholars such as Dignaga, Buddhaghosa, and Dhammapala lived here too.

The king of Kanchi, Pallava Mahendravarman I was a great scholar and musician, a man of great intelligence and also a great Sanskrit satirist and playwright.

Xuanzang, the great Chinese traveler, visited the city in the 7th century and said that this city was 6 miles in circumference and that its people were famous for bravery and piety as well as for their love of justice and veneration for learning. He further recorded that Buddha had visited the place.

As regards learning, Kanchi stood second in glory only to Banaras. The history of Kanchi can be traced back to several centuries before the advent of the Christian era. The place finds its name in Patanjali's Mahabhashya written in the 2nd century BCE Manimekalai, the famous Tamil classic, and Perumpanatru Padai, a great Tamil poetical work, vividly describe the city as it was at the beginning of the Christian era. Pattupattu, one of the sangam literatures records that the king Thondaiman Ilandirayan ruled this town around 2500 years ago. 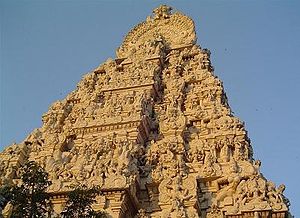 The temple tower at a Kanchi temple 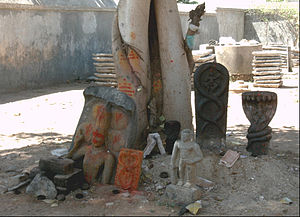 Naga-worship next to the Sri Vaigunda Perumal Temple in Kanchipuram

From the 3rd to the 9th century CE Kanchi was the capital of the Pallavas who ruled over the territory extending from the river Krishna in the north to the river Kaveri in the south. The Pallavas fortified the city with ramparts, moats, etc., with wide and well laid out roads and fine temples. They were a great maritime power with contacts with far-off China, Siam, Fiji, etc., through their chief Port Mamallapuram, the modern Mahabalipuram(now renamed again as Mamallapuram). The Cholas ruled this town from 10th century to 13th century. Kings of Vijayanagara dynasty ruled from 14th century to 17th century. The temple tower, 192 feet height in Ekamabaranadhar temple and 100-pillar mandabam (building) in Varadaraja Perumal temple in this town are famous for the architectural techniques of Vijayanagara dynasty.

Robert Clive, of the British East India Company, who played a major role in the establishment of British rule in India, is said to have presented an emerald necklace to the Varadaraja perumal (the Clive makarakandi, still used to decorate the Lord on ceremonial occasions).

Kanchi was a major seat of Tamil, Sanskrit, and Telugu learning as well as an important place of pilgrimage for Buddhists, Jains and Hindus. Once the seat of learning and religious fervour started its climb down from the Mughal invasions followed by three centuries of colonial rule under the British.

Bodhidharma (AD 520), who went to China to spread Buddhism, is said to be from Kanchipuram.[7] He stayed at the Shaolin Monastery and preached Buddhist ideologies. At that time he supposedly trained the monks in the art of Varmakkalai.[7] However, historians have proven that he had no historical connection to martial arts.[8]

Kanchipuram is also the seat of the Kanchi maţha, a Hindu institution that became influential and famous under the leadership of Shri Chandrashekarendra Saraswati. This maţha says that Adi Shankara settled in Kanchipuram after establishing four Āmnāya maţhas in the four corners of India and that this gave rise to the Kanchi maţha. However this claim is disputed by other mathas who claim the Kanchi matha is only a branch matha. The followers of Kanchi Math however claim that, due to Muslim invasions, this Matha was temporarily shifted to Kumbakon. 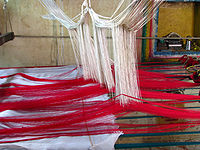 Today, apart from its temples, this small town is also known for its thriving hand loom industry. Kanchipuram town is also known as Silk City since the main profession of the people living in and around is weaving silk sarees, more than 5,000 families are engaged in this industry.

In 1997, research indicated that the number of child laborers in the silk-weaving industry in the district of Kanchipuram exceeded 40,000. This included children who were bonded laborers to loom owners. The Rural Institute for Development Education undertook many activities to improve the situation of child laborers. Working collaboratively, RIDE helped reduce the number of child laborers to less than 4,000 by 2007. In 2010, 'Kancheepuram Silk Sarees' not just received the GI tag but became the first product in India, to implement the security protocol, which includes jail and fine provisions for violators.[9]

In 2008, noted director, Priyadarshan, made Tamil film, Kanchivaram, about silk weavers' of the town, during in the pre-independence period, it won the Best Film Award at the annual National Film Award.

Being near the large industrial estates of Sriperumbudur, the face of the town has changed in recent years. Real estate has picked up well. Traditional industries such as Silk saris and pilgrim visitors are still making significant contributions to the local economy.

Kanchipuram in history was also been known as the ghatikasthanam or place of learning. Today several educational institutions offer courses in engineering, arts and science, and medicine, in and around Kanchi. Notable among them is Meenakshi Medical College and Research Institute located near Enathur, about 6 km from Kanchipuram. Since the Meenakshi Medical College was established in 2003, it has developed into a respectable institution of medical education. The Meenakshi hospital, which handles over 1000 outpatients every day, was established with modern infrastructure and facilities and provides service to many people in this area.

Kanchi Sri krishna college of Arts and Science is located in Kanchipuram. The Kalsar College Of Engineering is located at the Mannur village. Vallal pachiyappa Mudaliar run school, collages for men and women are located in kanchi from 19th century providing education to needy people. Asia's biggest International Library is located at Sri Chandrasekharendra Saraswathi Viswa Maha Vidyalaya (SCSVMV University) which is a part of Kanchi Mutt. This also runs the Sri Sankara Arts and Science college and Sri Chandrasekharendra Saraswathi Engineering College. The Aksheyaa College of Engineering[10], Puludivakkam, Madhuranthagam, which is sponsored by Mutthamil Educational Trust, Adyar, Chennai.

Some of the major schools in the City are listed below.

The special school which supports many differently abled children in and around the kancheepuram. They provide services to children with Autism, Cerebral Palsy, Mentally challenged and other developmental disabilities. 9444318518 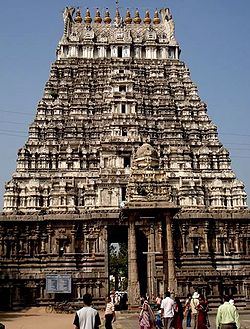 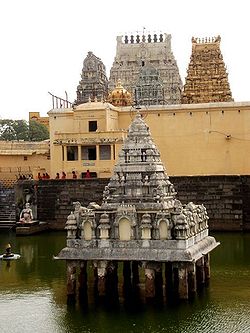 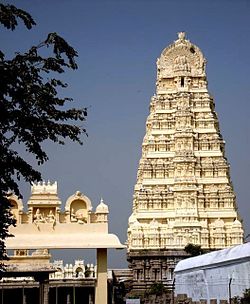 A gopuram of the Ekambareshwar temple

Kanchipuram is a major temple city of Tamil Nadu. The list gives the consolidated list of temples in and around Kanchipuram revered by the hymns of Alvars as well as Nayanmars.

Kanchipuram is known to be one of the three Shakti Peethas, the other two being Madurai and Kasi. This is because of the principal shrine, the Kamakshi Amman Temple, which is the seat of Goddess Kamakshi Amman. To honor the principality of this temple, the Siva temples in the city do not have an shrine dedicated to Goddess Shakti.

Kanchipuram was ruled by the Nawab of Arcot in early 1700 AD, many Mosques and Islamic Shrines are here which were built by the Nawabs. There are 9 Mosques in Kanchipuram. Nawab Sathathullah Khan Mosque and Vaikunda Perumal Temple are situated very close.

Both the mosque and the Temple share the same tank. It shows the communal harmony in Tamil Nadu and especially in Kanchipuram. The Hameed owliya dargah was also constructed by the Nawab and its a great Architecture.