Pakur
This article is about the municipality in India. For its namesake district, see Pakur district.

Pakur was earlier a Sub-Division of Santhal Parganas district of Bihar. It was upgraded to the status of district in 1994. Upon reorganization of Bihar state, India, in 2000 into two separate states, namely, Bihar and Jharkhand, Pakur district came under the administrative control of the Jharkhand state.

Traditionally, Pakur has been the land of Santhals and Paharias adivasis. However, over a period of time, demographic composition has gradually changed and the local folks have come to the mainstream of the Indian society. 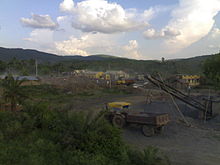 A Stone crushing unit in Pakur.

The economy of the district is predominantly agricultural. The district is also endowed with mineral wealth like coal, china clay, fire clay, and silica. However, infrastructural constraints have inhibited the growth of mining and allied industries. One of the main businesses of the city is mining and crushing. It is also known for the manufacturing of Crushing and screening equipments. It is also the place where the first indigenous crusher manufacturing unit was found in 1928 and is still functional in the name of "Agarwalla Crushers" and is being run by the sixth generation of entrepreneurs.

Since last decade there has been an enormous activity of coal excavation in the area as well. It has one of the biggest reserves of coal in the world. Currently only one block of coal is active in the region. It has been allotted to the Punjab State Government for their captive Thermal Power Plants. The excavation work on behalf of the Punjab State Government is being done by PANAM. It is a private - public joint venture between Punjab Government and AMTA.

Pakur is increasing steadily on the education front. Many schools and colleges are beaming up in Pakur. Some include: