Oxford Circus is a London Underground station serving Oxford Circus at the junction of Regent Street and Oxford Street, with entrances on all four corners of the intersection. The station is an interchange between the Central, Victoria and Bakerloo lines. It is the third busiest station on the network and the busiest without connection to the National Rail service. 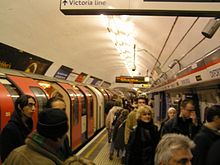 Busy platform on Central line. This platform has now been renovated.

The station opened on the Central London Railway on 30 July 1900, with the Baker Street and Waterloo Railway's platforms opening on 10 March 1906. The two companies had separate surface buildings and lift shafts. The station buildings, which remain today as exits from the station, were constructed on very confined plots on either side of Argyll Street on the south side of Oxford Street, just to the east of the circus itself. The stations were originally built as entirely separate, but connecting passages were swiftly provided at platform level. The surviving Central London Railway building to the east of Argyll Street is the best surviving example of the stations designed by Harry Bell Measures, and the Bakerloo line building to the west is a classic Leslie Green structure. Both station buildings are Grade II listed.[2]

Almost from the outset, overcrowding has been a constant problem at the station and it has seen numerous improvements to its facilities and below-ground arrangements to deal with this difficulty. After much discussion between the then two separate operators, a major reconstruction began in 1912. This saw a new ticket hall, dealing with both lines, built in the basement of the Bakerloo station, the Bakerloo lifts removed, and new deep-level escalators opened down to the Bakerloo line level. Access to the Central line was by way of existing deep-level subways. The new works came into use on 9 May 1914 with the CLR lifts still available for passengers. By 1923 even this rearrangement was unable to cope, so a second rebuilding commenced. This saw a second set of escalators built directly down to the Central line, the CLR station building becoming an exit only. Then, on 2 October 1928, a third escalator leading to the Bakerloo platforms was opened. Unusually, lifts came back into prominence at an Underground station when, in 1942, a set of high-speed lifts came into use, largely used as an exit route from the Central line platforms directly to the Argyll Street exit building.

The Victoria line opened on 7 March 1969. To handle the additional passenger loads, a new ticket hall was constructed directly under the road junction. In order to excavate the new ticket hall below the roadway, traffic was diverted for five years (August 1963 to Easter 1968) on to a temporary bridge-like structure known as the "umbrella" covering the Regent Street/Oxford Street intersection. Services tunnels were constructed to carry water mains and telecom cables past the new ticket hall. Construction of the Victoria Line station tunnels with their platforms, the new escalator shafts and the linking passages to the Central Line platforms was carried out from access shafts sunk from nearby Cavendish Square, Upper Regent Street and Argyll Street. 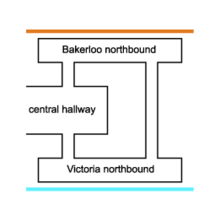 Cross-platform interchange between the Bakerloo and Victoria lines was provided by constructing the Victoria line platforms parallel to the Bakerloo line ones. With the additional escalators in place, a new one-way circulation scheme was introduced and the remaining lifts were removed.

In 1984, during renovation works, the station suffered a severe fire which burned out one of the platforms. It is believed that the fire was caused by smoking materials being pushed through a ventilation grille into a storeroom where they set several materials on fire. The incident led to a smoking ban being introduced on trains.

In 2007 the station underwent a major modernisation, removing the murals installed on the Central and Bakerloo line platforms in the 1980s and replacing them with plain white tiles, in a style similar to those when the station opened in 1900. One 1980s mural remains on the platforms for posterity. The work has also seen a restoration of the original Hans Unger-designed motifs [1] on the Victoria line platforms. Major escalator refurbishment took place in 2010-11.

Although there will be no direct interchange with Crossrail, the eastern Crossrail ticket hall of Bond Street station will be on Hanover Sqaure, which is a two minute walk away from Oxford Circus station.[3]

Nearby places of interest