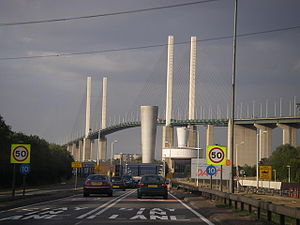 Northbound vehicles approaching the entrance to the western tunnel, with the southbound Queen Elizabeth II Bridge in the background 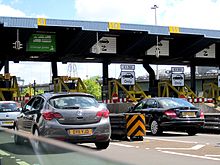 Toll booths towards the tunnel

The Dartford - Thurrock River Crossing, Dartford River Crossing (DRC) (or simply the Dartford Crossing) is a major road crossing of the River Thames in England, connecting Dartford in the south to Thurrock in the north, via two road tunnels and the Queen Elizabeth II Bridge. It opened in stages, the west tunnel in 1963,[1] the east tunnel in 1980,[1] and the bridge in 1991. Until the opening of the bridge, built to the east of the two tunnels, the crossing was known as the Dartford Tunnel.

The two tunnels are 1,430 m (1,560 yd) long,[1] while the cable-stayed bridge is 137 metres (449 ft) high with a main span of 450 metres (490 yd).[2] The crossing carries nearly 150,000 vehicles a day and forms part of London's orbital route, the M25—although the crossing and its approach road are actually the A282, allowing traffic prohibited from motorways to use the crossing. Southbound traffic crosses the four lane bridge; northbound traffic uses both of the two lane road tunnels. However, in bad weather or high winds, the bridge is closed and the crossing reverts to using the tunnels for both directions.

The crossing is 16 miles (26 km) east of the centre of London, but just 2 miles (3.2 km) outside the Greater London boundary. Its southern end is in Dartford, Kent; while its northern end is in Thurrock, Essex. Formerly managed jointly by Kent and Essex county councils, the crossing is now managed by Connect Plus (M25) Limited on behalf of the Highways Agency.

The crossing is a major bottleneck in the regional road network, being the easternmost road crossing of the River Thames, and the only one that is east of London. Therefore, the crossing is subject to major traffic congestion and disruption in the event of accidents or bad weather. The next nearest road crossings to the west are the Woolwich Ferry and the Blackwall Tunnel, both well within East London. The proposed Thames Gateway Bridge between these two crossings and the Dartford crossing was given planning permission in December 2004, but was later cancelled in November 2008.[3] The Lower Thames Crossing is a tentative proposal for a crossing, most likely a tunnel, to the east of the Dartford crossing.

In October 2009, the Government announced its intention to sell the crossing as part of a public sector deficit reduction strategy.[4]

The idea for a tunnel crossing was first promoted by Kent and Essex county councils in 1929. A pilot tunnel was completed in 1938, although World War II meant the tunnel was not completed to full diameter and opened to traffic until 1963. Tolls had been in place since the opening of the first tunnel, and were enacted to pay for the construction of the scheme.

After rapid increases in traffic, a second tunnel was initiated, and opened in 1980, allowing each tunnel to handle one direction of traffic. Connection of the crossing to the M25 was completed on the northerly Essex side in 1981 (Junction 31), and to the southerly Kent side in 1986 (Junction 1a).

In an early example of a Private Finance Initiative (PFI), under the Dartford-Thurrock Crossing Act 1988 control of the crossing passed from Kent and Essex county councils to Dartford River Crossing Limited in 1988, who would fund the construction of the QEII bridge and take on the remaining debt from construction of the tunnels.

In 1991 The Queen Elizabeth II Bridge was opened. The PFI scheme allowed DRC Ltd a 20 year concession to collect revenue, although this could be ended early once debts were repaid. Under the scheme, some parties had expected that the government of the time would scrap the toll once the debt had been repaid and a suitable maintenance fund had been accumulated,[5] which was deemed to have occurred on 31 March 2002.

A fee was retained however under the new principle of Road User Charging, which had been introduced in the 2000 Transport Act to use road pricing for controlling traffic congestion and funding local and national transport schemes. Under this act, the A282 Trunk Road (Dartford-Thurrock Crossing charging scheme) Order 2002 allowed the continuation of the crossing fee, which officially became a charge and not a toll on 1 April 2003. At the same time, under the terms of the 1988 Act the DRC company was liquidated and management of the crossing was contracted to Le Crossing Company Limited on behalf of the Highways Agency. Under the new user charge regime, Le Crossing collects the charges which are set in statutory Charging Orders under the 2000 Act, with the revenue passing in full to the government for redistribution, and annual public accounts of the operation published showing expenses/revenues of the crossing.

On the 13th of September 2009 the contractors of the Dartford River Crossing (Le crossing) changed to Connect Plus M25, which again is made up of a consortium of Atkins, Egis, Skanska, and Balfour Beatty. 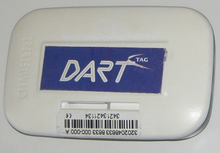 The charge payment booths for both directions of travel are located on the south side of the crossing. Charges can be paid in cash or through a pre-paid DART-Tag.

The cash charges vary for the type of vehicle. Motorcycles are free but there are standard charges for cars, larger two-axle vehicles and larger vehicles with more than two axles.[7] Cash is collected in person at a booth, or dropped into an automatic hopper. Under the 2008 Charging Order introduced on 15 November 2008, charges between 10pm and 6am were scrapped, but standard daytime rates increased from £1 to £1.50 for cars.

The DART-Tag is a device that enables drivers to pass the payment booths without having to pay cash, and provides discounted charge rates. Normally inserted into a holster that is stuck to the inside of a vehicle's windscreen, it is detected by sensors at the payment booths and automatically deducts the charge from the driver's pre-paid account. People who use this pre-paid system save money per trip. The prices for DART-Tag account holders are £1 per crossing for a car, £1.75 for a van (a vehicle without windows behind the driver's or passenger's seats) and £3.20 for a multi-goods vehicle. Although the DART-Tag device is free and available to anyone, the tag remains the property of the Dartford Crossing and if lost/stolen or damaged would be charged for.

On 15 November 2008, a local residents' scheme was introduced for car drivers resident in the Dartford and Thurrock council areas. For an annual registration fee of £10, local residents are entitled to 50 free crossings and additional crossings at 20p.[8]

Failure or refusal to pay the charge is a criminal offence under section 22 of The Dartford-Thurrock Crossing Act 1988.

People who are exempt from Vehicle Excise Duty on the grounds of disability can cross for free.[9]

Pedal powered cyclists are allowed to use the crossing for free, and are conveyed with their bicycles across the crossing in transport provided by the crossing authority.

The transport of hazardous goods through the crossing is governed by the European ADR Agreement. Oversize and abnormal loads are escorted through the tunnel.

The tunnel must hold regular live exercises in conjunction with the emergency services. In 2006 Exercise Orpheus was held, involving the closure of both road tunnels.[11]

The tunnel has been patrolled by Highways Agency Traffic Officers, since 12 September 2009. Before then, traffic officers were appointed by the crossing operator.[12]

Traffic officers may stop and direct traffic within the crossing and, so far as is necessary for the performance of any of their duties, on the approach roads.[12] Traffic officers must be in uniform to exercise their powers.[12]

Low power transmitters for some radio stations and transceivers for some mobile phone operators are located inside the tunnels[citation needed].

The high speed rail line HS1 from Kent to north London goes over the crossing approach roads on the north side of the river, at a near right angle. The Thurrock Viaduct carries the railway line over the tunnel approach roads, but under the bridge approach, allowing traffic on the bridge a view of the rail line. The railway line then goes under the river in a tunnel to the east of the crossing. Because the river bends from west to north nearby at Greenhithe, the rail tunnel goes from east to west while the Dartford Crossing tunnels go from north to south.

Strategic road connections are possible from the M25 to the line via the nearby Ebbsfleet International station, allowing onward travel into London or into France and continental Europe.

The bridge has been featured briefly in the British films Four Weddings and a Funeral, Essex Boys, and the Harry Potter series. It also appears in the opening credits of the police drama Thief Takers, and in a 2010 television advertisement for Kellogg's Crunchy Nut cereal. The crossing is a regular fixture in Police Interceptors.

London Transport ordered five double decker buses based on the Ford Thames Trader for special duties, taking cyclists through the Dartford Tunnel. These had a lower deck purpose-built for carrying bicycles, with the upper deck for cyclists. Unusually, these buses had their stairwell several feet above the level of the road, accessible by a ladder. The service was later dropped in 1965, owing to lack of cycle traffic and possibly the design. One of these buses has been saved for preservation.[13]

Other public bus routes that have used the crossing, and since ceased, were the Eastern National 402 (Southend-Dartford/Kings Cross), and the Dartford-Basildon 'Thames Weald' Express.

Since 2003, there has been a public bus service through the Dartford Crossing; the X80 provided by Ensignbus, which links Thurrock with Bluewater.