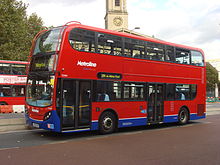 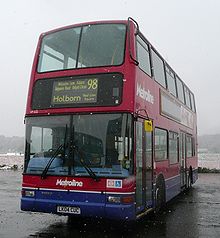 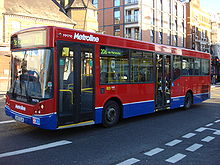 A Metroline MCV Evolution on route 206

Metroline, owned by ComfortDelGro Corporation of Singapore, is one of many companies operating bus services in London under the management of London Buses.

Metroline was founded in 1989 by London Buses Limited, privatised in 1994, and acquired by ComfortDelgro in 2000. It incorporates the Metroline London Northern subsidiary, which was acquired from MTL in 1998. It also bought Scottish Citylink in 1998. Between 2004 and 2005, Metroline stepped up its expansion drive, purchasing two smaller London bus operators, Armchair and Thorpes. The latter two companies continued to operate buses under their former names until 6 January 2007, when their bus operations merged with Metroline. It is the first operator to order Alexander Dennis Enviro400 buses, of which 28 entered service in early 2006 on cross-city route 24.

In 2005, Metroline was reported as the bus company with the second-most complaints filed with Transport for London, after Arriva London.[1]

On 14 and 20 November 2006 Metroline bus drivers staged two one-day strikes over pay. It was the first London bus drivers strike of its kind in the 21st century. The dispute was successfully resolved between the company and trade union through further negotiation and compromise by both parties recommending an offer of 5.75% on all elements of pay. It was accepted by drivers in December 2006.

In June 2009, Metroline dropped the distinctive blue skirt from their livery, which had identified the company's buses since they were privatised. They now paint their buses in all over red like most operators, leaving Go-Ahead London as the only operator in London to paint buses in a variant livery.

Following the merger of Armchair and Thorpes, they now have 11 bus garages.

Brentford started operating as a bus garage in 1990 by Armchair Transport initially to house its recently won route 260 buses. The base had previously been used as a coach operating base which at the time was Armchair's main business. Armchair was bought out in 2005 by ComfortDelgro Holdings, the parent company of Metroline, although it continued to operate buses separately under the Armchair name until 2007. Since the take over a number of buses from the Metroline fleet have operated on Armchair routes.

Armchair's coach business continues to operate under its own name, and includes commuter coach services and private hire.

This garage opened for service in May 1905 and was originally called Dollis Hill, It was the first motorized depot used by the LGOC and is one of London's oldest bus garages. In 2007 bus parking was temporarily relocated to a site on the opposite side of Edgware Road to allow work to commence on the replacement of the original garage buildings with a modern structure. This will provide better maintenance facilities, and improved staff and office accommodation. In January 2009 bus parking transferred back to the main site.

On 28 August 2010, route 186 was temporarily transferred to Cricklewood.

On 3 September 2011, London Sovereign successfully gained the contract of route 251 and are now operating it from their Edgware (BT) garage.

When Edgware garage was first opened by the LGOC in 1925 it had space for 24 buses, but there was plenty of room adjacent to the Underground station which had recently been built. In 1939 a new building was built next to the original building which was to become the new Bus Station, while the remaining open parking area was used to store vehicles for the trolleybus replacement programme. In 1984 a new 100 bus garage was built on old railway land at a cost of £4.5 million, However in 1992 Edgware garage was planned for closure, as Cricklewood garage was to become a fully functioning garage with new facilities. The outdoor parking area and the bus station then became a midibus base in 1993, with a new bus wash and light maintenance facilities provided in the yard. Then in 1999, London Sovereign, who had won some recent tenders in the North East London area, took on a 10 year lease on half of Edgware garage and invested in new maintenance facilities in order to replace its former base at Borehamwood. In late 2000 Metroline moved back into the other half of the garage, making it one of the few garages to be shared by two operators.

Route 186 will be transferred back to Edgware garage from 17 December 2010.

On 28 September 2011, London Sovereign successfully gained the contract for route 605 and from 1 September 2012, they will be operating it from their Edgware (BT) garage.

Harrow Weald garage was opened in 1930 by the LGOo to replace the much smaller South Harrow garage. The new garage had to be extended over the forecourt just two years later to provide additional space. In its earlier years the garage was used by the LGOC to house its experimental vehicles including the Daimler CH6's and the first diesel bus (ST). In 1987 Harrow Weald was the base for the new Harrow Buses operation set up by London Transport which had won tenders for a new local network. The garage survived the collapse of Harrow Buses and passed to Metroline and in 1994 just short of 60 buses were based there. The garage also undertakes engineering work on buses based at North Wembley and Edgware garages.

Originally opened as Holloway Tram Depot in 1907, it was the largest of LCC's sheds with space for 336 trams. It was renamed Highgate in 1950 (by which time it was a trolleybus depot) to avoid confusion with Holloway ("J") Bus Garage, and then back to Holloway in 1971 following the closure of the original Holloway garage. The garage then had an allocation of 210 buses although that drifted downwards until 1993 when the closure of Chalk Farm and the transfer of 5 routes into the garage meant Holloway was once again bursting at the seams. Today the garage is almost at capacity levels with around 200 buses allocated in addition to the outstation at Kings Cross. A prize route for Holloway, and for Metroline, since it was wrested back from Grey-Green in 2002, route 24 was lost to London General (Stockwell Garage) in November 2007. In July 2010, route 214 was transferred to the new King's Cross (KC) depot and the daytime service of route 390 was transferred to this garage.

In August 2011, Abellio London gained the contract to operate route C2, and from 3 March 2012, they will be operating it from their Queenstown (Battersea) (QB) garage. Bus types are yet to be confirmed. [4]

Metroline have successfully gained the contract for route 79 and from the 26 November 2011 they will operate it from this garage. [5]

In August 2011, First Centrewest gained the contract to operate route 206, and will take over operation on 28 April 2012. Bus types and garages are yet to be confirmed.[6]

In September 2011, First Centrewest gained the contract to operate route 70, and will take over operation on 23 July 2012.

On 2 July 2011, Metroline successfully gained the contract of route 105 and are operating it from this garage.

From 26 November 2011, route 90 will be transferred to this garage from Perivale East (PV).

Opened in 1930 at a cost of over £48,000 by the LGOC subsidiary 'Overground', it was nearly closed in the 1960s as it was too far north to be useful to the red bus network. It survived but soon faced closure again in the 1980s during deregulation. This time it was saved after crews accepted a revised pay agreement and the depot tendered for and won Hertfordshire County Council routes. During the Second World War and in the run up to the Festival of Britain the garage was used as a storage facility for buses. In 1952 the garage allocation consisted entirely of RT's with some 68 as a daily requirement. In 1973 the experimental FRM1 was allocated to the garage for single bus route 284 and lasted there until 1976. The garage has seen an interesting mix of buses over the years ranging from Ford minibuses and A class Dodges to Volvo Ailsas and the route branded X43 Scanias acquired when Finchley Garage closed. 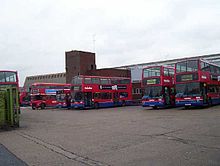 Opened in 1902 Willesden was used for major Chassis overhauls before Chiswick Works opened in 1921. During World War II it was also use to provide major body overhauls. Prior to the war its allocation consisted mainly of ST's and STL's whilst RT's and RTW's were the main allocation afterwards. Prototype RM (RML3) was allocated to the garage in 1958, and then ran the first production RM's on route 8 in 1959. These moved on for trolleybus replacement later that year but RM's reappeared in 1965 to replace the RTW's. Improvements to the garage were made in 1975 to enlarge its capacity from 90-120 in order for the stonebridge allocation to be moved in, although the talk of providing staff housing on the site never materialised and Stonebridge work didn't move to AC, but to Westbourne Park (X). In 1994 Metroline became the first ex-London Buses company to expand when it bought Atlas Bus & Coach, regaining the 52 which it had earlier lost under tendering although it continued to be operated from Harlesden until 1995.