An impression of how the Kearney High-Speed Tube, one of the Edgware Rd. schemes, might have appeared on the Tube map, had it been built

The Edgware Road Tube schemes cover a number of proposals to build an underground railway in London, UK at the end of the Nineteenth century. Each of the schemes envisaged constructing some form of rail tunnel along the Edgware Road in north-west London to Victoria railway station and beyond.

Attempts to build a railway under the Edgware Road came about at a time of fervent railway construction, following in the wake of popular projects such as City and South London Railway. Like several other proposals at the time, such as the City and Brixton Railway, none of the Edgware Road schemes ever succeeded.

The Edgware Road and Victoria Railway (ER&VR) was an early scheme for an underground railway under the Edgware Road. The promoters sought to raise capital of £1.2 million (£98.7 million today)[1] to cover the estimated railway construction costs of £921,428 and the cost of constructing a dedicated power station for the railway at the Paddington Basin. Additional borrowing powers of up to £400,000 were also sought.[2]

It was rejected by Parliament in March 1893 and the project was abandoned.

The ER&VR was planned to run on a north-west-to-south-east axis, more or less following the route of the Edgware Road. Beginning in the north, a surface-level depot was planned near the location of the present-day Brondesbury Park railway station between Willesden Lane and Dyne Road. Trains were to run down into a tunnel to the first station. Passing south-east, the stations planned were:[2]

A bill to allow the project to go ahead was considered by the House of Commons Select Committee in March 1893. A number of petitions were made to the committee by property owners along the proposed route of the ER&VR, concerned by the construction of a tube railway under their properties. The construction of the City and South London Railway (C&SLR, part of today's Northern line) had given rise to a number of problems, such as building subsidence on top of brick-built station tunnels. As the C&SLR was the first deep-level tube railway to be built, there were still concerns about construction and ventilation issues with this type of tunnel. To address these concerns, the route of the railway tunnel was moved slightly west between Marble Arch and Victoria so it would run under Hyde Park and avoid the affluent properties of Park Lane.

Despite this, the committee was still not confident about the proposal to build another tube tunnel under London, and the bill was rejected.[2]

In 1898, the Cricklewood, Kilburn and Victoria Railway Construction Syndicate was incorporated to promote a similar project to the failed ER&VR. Like the NWLR, the railway would have followed the Edgware Road route beginning further north at Cricklewood. The company was defeated by the passing of the NWLR's bill and the syndicate was dissolved in 1901.[3]

The proposal to build a railway under the Edgware Road was revived in 1899 when a group of engineers began to promote the North West London Railway (NWLR). The railway would have followed a similar route to the ill-fated ER&VR, but was to begin further north at Cricklewood and would only run as far as Marble Arch. Its promoters included Sir Benjamin Baker, Sir Douglas Fox and Sir Francis Fox, and they had £1.5 million capital and sought to borrow a further £500,000. Although the bill to grant construction powers passed successfully through Parliament in 1899, there were difficulties raising the necessary funds. The only proven tube railway at the time, the C&SLR, was not delivering a great return on investment, and investors were hesitant. The outbreak of the Second Boer War in 1899 destabilised the money markets and construction on the NWLR project never commenced.[3]

In 1902 the scheme was allowed an extension of time to begin construction, and an increase in tunnel size from 12' 6" to 13' 0". The next year a bill was presented proposing an extension to Victoria Station, under Hyde Park and Grosvenor Place. However the bill was withdrawn following its postponement due to the London Traffic Commission. It was to transpire that the Commissions' only recommended new 'tube' would be an extension of the North West London from Marble Arch to Victoria. In 1906 the NWLR reintroduced its Victoria extension along with a reduction in tunnel size to 11' 8¼", receiving Royal Assent in August. However the financial conditions imposed on the Bill made the extension unattractive. 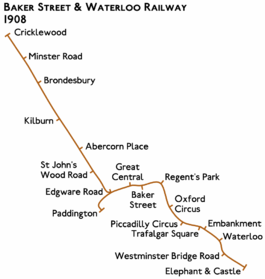 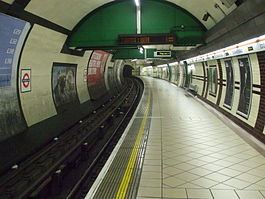 The Bakerloo Tube at Edgware Road

When the NWLR's tube project became financially unviable, the company's plans were adopted in 1908 by a more successful underground railway company, the Baker Street and Waterloo Railway (BS&WR). The BS&WR had already opened an underground line in 1906 from Baker Street to Waterloo and Elephant and Castle (the "Bakerloo" Tube), and had already extended its line to Edgware Road. The company was keen to extend further into north-west London and hoped to make use of the powers acquired by the (NWLR) to build the Edgware Road tube line.[4]

Abandoning the Marble Arch-Victoria section of the NWLR route, the BS&WR instead proposed building the Edgware Road tube line only as far south as its Edgware Road station, which was close to the NWLR's planned route. The NWLR announced a bill in November 1908 seeking to construct a 757 metres (2,484 ft) connection between its unbuilt route beneath the Edgware Road and the Bakerloo Tube's Edgware Road station.[5] The Bakerloo Tube was to construct the extension and operate the service over the combined route, which was to have stations at St John's Wood Road, Abercorn Place, Belsize Road, (close to the LNWR station), Brondesbury (to interchange with the North London Railway's station and close to the MR's Kilburn station), Minster Road and Cricklewood.[4][6] The Bakerloo Tube announced its own bill to make the necessary changes to its existing plans.[7]

The BS&WR/NWLR joint scheme faced opposition from other railway companies; the Great Western Railway (GWR) objected to the reduction of the Bakerloo Tube's Paddington connection to a shuttle; and the Metropolitan Railway (MR) objected to the connection of the two lines which would be in competition with its line through Kilburn. Parliament rejected the proposed connection and the changes to the NWLR's route, and the company's permissions eventually expired without any construction work being carried out. The Bakerloo Tube bill was withdrawn.[4] This was to be the first bill promoted by the NWLR that did not receive Royal Assent. 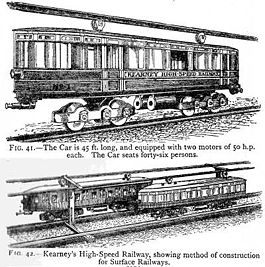 In 1905-08, the Australian-born engineer Elfric Wells Chalmers Kearney put forward a plan to build two tube lines from Crystal Palace to Strand and Cricklewood, known variously as the Cricklewood & Oval and Strand & Crystal Palace Tube Railways, the Kearney High-Speed Tubes or the Kearney High-Speed Railway. The scheme was promoted by the Kearney High-Speed Tube Railway Company Ltd. and proposed the construction of an underground railway operated on an unusual monorail system patented by Kearney. Trains would run on a single rail with four double-flanged wheels under each carriage; wheels mounted on the roof would run along an upper guide rail above the train. The trains, which were to be designed in a streamlined style similar to the London Underground 1935 Stock, would have a low centre of gravity, which, along with the gyroscopic effect of motion, would stabilise the train on the lower rail and reduce the side-to-side hunting oscillation. The stations were to be located just below the surface, connected by deep-level tube tunnels which would drop down steeply from each station; it was intended that the 1 in 7 track incline would enhance acceleration and deceleration between stations with the effects of gravity, with trains reaching 60 miles per hour (97 km/h) before decelerating. This "roller coaster" system was promoted for its low power consumption.[8]

Kearney promoted his system by publishing leaflets, writing a book, giving lectures and he displayed a model of a Kearney train in 1905 for the press.[8]

The proposed route comprised two lines across London: a line aligned along the Edgware Road route from Cricklewood via Victoria to Oval; and a line from Strand to Crystal Palace, connecting with the Cricklewood line at Oval:[9]

The Kearney Tube system was promoted in other unsuccessful schemes around the world, including New York, Boston and Toronto.[8] 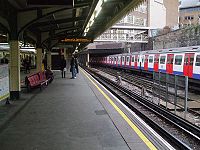 The Metropolitan Railway secured powers in 1926 to build an underground line of surface gauge from near Kilburn to Edgware Road, mainly to relieve the bottleneck of two tracks between Finchley Road and Baker Street stations. Edgware Road station was rebuilt as a four track station, and even destination boards displaying 'Aylesbury Line' installed. However further construction was postponed, and the subsequent take over of the Metropolitan by the LPTB enabled other plans to be put in hand, resulting in the extension of the Bakerloo line to Finchley Road station.[9]