Mile End is a London Underground station in Tower Hamlets, East London, served by the Hammersmith & City, District and Central Lines. It is in Travelcard Zone 2.

The station was opened in 1902 by the Whitechapel & Bow Railway. Electrified services started in 1905. In 1923 ownership of the station passed to the London, Midland and Scottish Railway, although services were provided by the District Line with the Hammersmith & City Line (then the Metropolitan Line) following in 1936. The station passed to London Underground after nationalisation of the railways. In 1946 the station was expanded and rebuilt as part of the Central Line eastern extension with services starting on 4 December 1946.

On 5 July 2007, a Central line train was derailed when it hit a roll of fire blanket which had been blown out of a cross passage between the two tunnels by the strong cross winds.[2]

In November 2009, part of a plastic barrier broke off from a departing train and struck three commuters.[3] One woman suffered a 5 cm cut in her forehead and TfL faces a fine of up to £20,000 after admitting liability in the case.[4]

Mile End is the only subterranean station on the network that offers cross-platform interchange between 'tube' (Central Line) and 'sub-surface' (District and Hammersmith & City Line) trains. The station takes its name from the A11 Mile End Road, which itself is named after a milestone signifying the point one mile (1.6 km) east of the boundary of the City of London. However, the stone's position was actually closer to Stepney Green than Mile End station itself, which is further east, on the junction with Burdett Road. 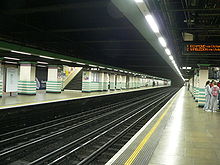 View of the station's platforms prior to refurbishment. The District and Hammersmith & City Lines utilise the center tracks seen here, while the Central Line trains use the outside tracks.

The station is currently undergoing renovation works. Metronet, a TfL Public–private partnership company, got as far as stripping the station bare before the company collapsed in 2008. After a short change over period TfL continued the renovation work.[5]

This station is close to Victoria Park and Mile End Park, as well as the Regent's Canal. Queen Mary, University of London, Mile End Hospital and the now closed St. Clements Hospital, part of the Royal London Hospital, are nearby.