Many routes from London's two busiest termini, London Waterloo and Victoria, funnel through the station making it one of the busiest in Europe by number of trains using it, more than one hundred an hour outside peak periods.

Before the railway came the area was rural and specialised in growing lavender; Lavender Hill is to the east of the station. The coach road from London to Guildford ran slightly south of the future station site, past The Falcon public house at the crossroads in the valley between St. John's Hill and Lavender Hill.

On 21 May 1838 the London and Southampton Railway, which became the London and South Western Railway (L&SWR) that day, opened its line from Nine Elms as far as Woking. That was the first railway through the area but it had no station at the present site. 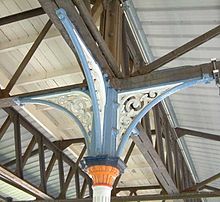 The second line, initially from Nine Elms to Richmond, opened on 27 July 1846. Nine Elms was replaced in 1848 as the terminus by Waterloo Bridge station, now Waterloo. The line to Victoria opened by 1860. Clapham Junction station opened on 2 March 1863, a joint venture of the L&SWR, the London, Brighton and South Coast Railway (LB&SCR) and the West London Extension Railway (WLER) as an interchange station for their lines.[3]

When the station was built Battersea was regarded as a poor district while Clapham, a mile east, was more fashionable. The railway companies, to attract a middle and upper class clientele, adopted the grander of the two names, leading to a long-lasting misunderstanding that the station is in Clapham. A local action group, Love Battersea, was belatedly formed in 2005 to reduce the misapprehension.[4]

Additional station buildings were erected in 1874 and 1876.

Each day about 2,000 trains, most stopping, pass through the station, more than through any other station in Europe.[citation needed] At peak times 180 trains per hour pass through of which 117 stop. It is not the busiest station by number of passengers, most of whom (about 430,000 on a weekday, of which 135,000 are at rush hours) pass through. Interchanges make some forty per cent of the activity and on that basis too it is the busiest station in the UK.[5]

As of 2011, the station has three separate entrances, all of which have staffed ticket offices (though only the south east entrance is open 24 hours a day). The south east entrance, which is the most heavily used of the three, leads from St. John's Hill, via a small indoor shopping centre, into a subway some 15 ft (4.6 m) wide which connects to the eastern ends of all platforms.

The northern entrance, which has restricted opening hours, leads from Grant Road to the same subway. The subway is crowded during rush hours, ticket barriers at the ends are pinch points.

The south west entrance (also known as the Brighton Yard entrance, as the Victorian station buildings still bear signage for the London Brighton and South Coast Railway) is of a more traditional appearance, with a Victorian station building set at the back of a large forecourt. This entrance leads to a very wide covered footbridge, which joins the western ends of all platforms. This entrance includes cycle parking and a taxi rank. It was opened in May 2011, as part of a wider programme of access improvements which included installing lifts to the platforms.[6]

The station has full public and disabled toilet facilities at the south west entrance. There are refreshment kiosks in the underpass, on the overpass, and on some platforms; and a small shopping centre (including a small branch of Sainsbury's supermarket) in the St. John's Hill entrance.

Clapham Junction has no London Underground connection, but in 2007 the alignment of the proposed Chelsea-Hackney line possibly reaching Clapham Junction was safeguarded. The possibility of a further extension to the Northern line, once the extension to Battersea has been completed, has also been discussed.

The Secretary of State for Transport announced in February 2009 the allocation of £75m for extending the London Overground East London Line to Clapham Junction, a link which will connect Clapham Junction through Peckham Rye to Dalston Junction in north-east London. The extension is set to be completed by October 2012.

A planning application from Metro Shopping Fund for a £39.5 million project at the station was withdrawn shortly before Wandsworth Planning Committee was to consider it on 20 May 2009. The plan included a new entrance on St John's Hill, straightened and extended platforms 15-17, more ticketing facilities, an enhancement of current works to give step-free access to all platforms by 2011, a new step-free entrance on Grant Road, and a new 'high street' from St John's Hill to Falcon Road with retail space and an art house cinema. To pay for the rail improvements there would have been two 42-storey residential buildings above the station.

Clapham Junction is overcrowded during rush-hours and improvement is needed. In 2009 a mystery shopper assessment of fabric and environment listed the station in the ten worst category B interchange stations. It is to share a £50m funding for improvements.[8] It was referenced in the review as "upgrade interchange: new entrances & more retail".[9]

Heathrow Airtrack is a proposed rail link from Heathrow Airport running south to the Staines to Windsor Line to provide direct services to London Waterloo, calling at Clapham Junction, and to Reading and to Guildford. Clapham Junction would be an interchange for air passengers changing between Heathrow and Gatwick Airports. If permission was granted, work was forecast to begin in 2010, with rail services operating by 2014. As of April 2011, the project has been shelved.

On the morning of 12 December 1988 two collisions involving three commuter trains occurred slightly south-west of the station. Thirty-five people died and more than 100 were injured.

All services from Waterloo, by South West Trains, and many from Victoria, by Southern and Gatwick Express, use the station as do the West London Line services of London Overground and Southern.

Typical off-peak service of more than 120 trains an hour comprises: 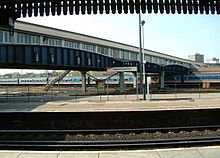 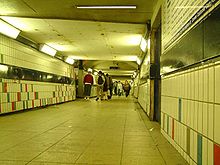 The subway at Clapham Junction at night

The main service usage at the platforms is:

Platforms 11-17 are very curved with very wide gaps between platforms and trains.

A 1912 Railway Clearing House map of lines around Clapham Junction

The station is named Clapham Junction because it is at the junction of several rail lines. The name is not given to any rail junction near the station which, without end-on intercompany junctions, are: