A205 redirects here. For the Fujifilm A205 camera, see Fujifilm FinePix A-series.

The A205 or South Circular Road is a direct route which crosses South London, UK, running from Woolwich in the east to the junction of the A406 (North Circular Road), the M4 and the A4 at Gunnersbury in the west.

Together with the North Circular Road, the South Circular forms a ring road through the inner part of Outer London. This ring road does not make a complete circuit of the city, as the crossing of the River Thames in the east is made on the Woolwich Ferry.

Unlike the North Circular, the South Circular is not a purpose-built route, but a collection of pre-existing suburban roads joined together, which has resulted in a disjointed feel, with totsos at several junctions. This makes it seem little more than a sequence of road signs.

The South Circular Road was first proposed in Sir Patrick Abercrombie's County of London Plan of 1943, as the southern half of one of a number of ring roads around the capital. Abercrombie designated it as the "C Ring" (the third ring out from the city centre); however, the plan for a high-quality road was not realised and the semi-circular route was assigned to existing roads through the southern suburbs;[1] these roads retain their historic names.

In the 1960s, Abercrombie's plans were revived by the Greater London Council (GLC) as the London Ringways Plan which proposed the construction of a series of motorways in and around London to control traffic congestion. The existing A205 route was recognised as being unsuitable for upgrading and a new motorway, Ringway 2, was planned for construction further south. Due to the destruction required and cost involved in the proposed plans the majority of the Ringway Plans were cancelled in the early 1970s including Ringway 2. The route remains mainly single carriageway and the chances of any upgrades to the road are considered small at best.

The majority of the South Circular Road is single carriageway, one lane each way, aside from a small section of dual carriageway near the Woolwich ferry. Some of the wider sections of the road as it travels through Brixton and Clapham, which formerly were single carriageway, albeit with two lanes each way, have had the outside lanes turned into bus lanes. This has an adverse effect on the traffic flow, and has increased congestion and journey times in many areas.[citation needed] However it is the policy of Transport for London (TFL) to encourage the use of public transport, and reduce car journeys within the capital. 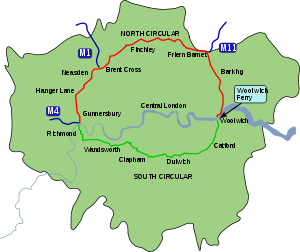 The route of the South Circular in Greater London, with the North Circular and Woolwich Ferry shown.

The route starts just south of the Woolwich Ferry where the A2204 Ferry Approach road and the A206 meet.[2]

The route goes south, climbing up John Wilson Street, a section of dual carriageway, until it meets Grand Depot Road when it becomes a single carriageway and travels south west along Woolwich Common and Academy Road past the former Royal Military Academy. After crossing over the A207/Shooters Hill Road, the route goes along Well Hall Road until the roundabout junction with Rochester Way, when it turns slightly more west onto Westhorne Avenue and becomes dual carriageway again. It passes under the A2 at a grade separation junction, one of only two on the route, and continues south westerly as a dual carriageway, crossing Eltham Road (A210 road) and Sidcup Road (A20 road), until the junction with Burnt Ash Hill when it becomes single carriageway again - which it will remain for most of the route.

The first section of the single carriageway is Saint Mildreds Road; then, shortly after passing under the railway line, it is Brownhill Road due west all the way to the Catford gyratory system which crosses the A21 to follow Catford Road past the now closed Catford Stadium,[3] and then Stanstead Road, where it does a totso along Sunderland Road, Waldram Park Road, Waldram Crescent and Dartmouth Road, before turning slightly north at the start of the A2216 road at Forest Hill to follow London Road past the Horniman Museum. At the junction with Wood Vale the route turns north west along Lordship Lane before it does a "totso" (turn off to stay on) west onto Dulwich Common, passing Dulwich College. The route then goes along Thurlow Park Road, crossing the River Effra, before coming to the Tulse Hill gyratory, which is a junction with the A215 and A204 roads, as well as the point where the postcode changes from SE to SW.

The route climbs slightly on Christchurch Road, crossing the A23 on Brixton Hill to become dual carriageway for the two hundred yards of Streatham Place, before returning to single carriageway on Atkins Road where there's a totso onto Poynders Road. At the junction with Cavendish Road the route turns north before curving to the north-west to arrive at the southern corner of Clapham Common where the A24 is crossed for the route to travel along The Avenue on the west side of the common.

The A205 now meets and merges with the A3 London to Portsmouth road for two miles, travelling along Battersea Rise, North Side Wandsworth Common (the second grade separation junction, over Trinity Road), Huguenot Place, East Hill, Wandsworth High Street (passing the old Ram Brewery), and West Hill where the routes diverge; the A205 going north-west along Upper Richmond Road to Kew Bridge and the junction with the M4 and the A406 North Circular Road.