The location of Belarus 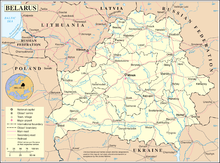 An enlargeable map of the Republic of Belarus
See also: Index of Belarus-related articles

The Republic of Belarus is a landlocked sovereign country located in Eastern Europe.[1][2] Belarus borders Russia to the north and east, Ukraine to the south, Poland to the west, and Lithuania and Latvia to the north. A third of the country is forested, and agriculture and manufacturing are its strongest economic sectors.

Until the 20th century, the Belarusians lacked the opportunity to evolve a distinctive national identity, since the lands of modern-day Belarus belonged to several countries, including the Duchy of Polatsk, the Grand Duchy of Lithuania, the Polish-Lithuanian Commonwealth, and the Russian Empire. After the short-lived Belarusian People's Republic (1918–19), Belarus became a constituent republic of the Soviet Union, the Byelorussian SSR. The parliament of the republic declared the sovereignty of Belarus on July 27, 1990, and following the collapse of the Soviet Union, Belarus declared independence on August 25, 1991. Alexander Lukashenko has been the country's president since 1994. During his presidency, Lukashenko has implemented Soviet-era policies, such as state ownership of the economy, despite objections from Western governments. Since 1996, Belarus has been negotiating with Russia to unify into a single state called the Union of Russia and Belarus.

The following outline is provided as an overview of and topical guide to Belarus: 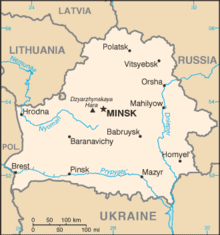 An enlargeable basic map of Belarus 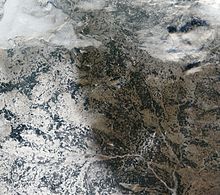 There are 118 districts in Belarus.

Government and politics of Belarus

Executive branch of the government of Belarus

Legislative branch of the government of Belarus

Judicial branch of the government of Belarus

The Republic of Belarus is a member of:[1]

Law and order in Belarus