The Belarusian People's Republic (Belarusian: Белару́ская Наро́дная Рэспу́бліка, [bʲeɫaˈruskaja naˈrodnaja rɛsˈpublʲika], translit. : Belaruskaya Narodnaya Respublika, historically referred to as the White Ruthenian Democratic Republic (German: Weißruthenische Volksrepublik,[1] French: République Démocratique de la Ruthénie Blanche[2])) was a self-declared independent Belarusian state, which declared independence in 1918. It is also called the Belarusian Democratic Republic or the Belarusian National Republic, in order to distinguish it from Communist People's Republics. The BNR was recognized by several Central Powers and former Russian countries, but not by the majority of the international community, and ceased to exist when Belarus was taken under Soviet control and the Belorussian SSR was founded in 1919, though BNR authorities later formed a government in exile.

The Belarusian People's Republic was declared on March 25, 1918 during World War I, when Belarus was occupied by the Germans according to the Treaty of Brest-Litovsk.

After the 1917 October Revolution in Russia, active discussions started in Belarus about either gaining autonomy within the new democratic Russia or declaring independence. Representatives of most Belarusian regions and of different (mostly left-wing) political powers, including the Belarusian Socialist Assembly, the Christian democratic movement and the General Jewish Labour Bund, formed a Belarusian national council in late 1917. The Council started working on establishing Belarusian governmental institutions. Both the Bolsheviks and Germans refused to recognize it and interfered in its activity. However, the Germans saw an independent Belarus as part of the implementation of their plan for buffer states within Mitteleuropa. The Bolsheviks had negotiations with the Belarusian Democratic Republic regarding an eventual recognition, but later decided instead to establish a Soviet puppet government of Belarus - the Soviet Socialist Republic of Belarus.

Parallel with negotiations that started between the Germans and Bolsheviks, the Belarusian Council started actively demanding recognition of an autonomous status for Belarus, with continuing internal discussions on whether it should become an autonomy within Russia or declare national independence. 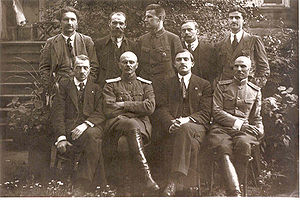 On March 25, 1918, the Council issued a third charter declaring the independence of Belarus. Following that, local meetings were held within Belarusian cities that issued resolutions supporting the creation of an independent republic.

In its Third Constituent Charter, the following territories were claimed for BNR: Mogilev Governorate (province), as well as Belarusian parts of Minsk Governorate, Grodno Governorate (including Belastok), Vilna Governorate, Vitebsk Governorate, and Smolensk Governorate, and parts of bordering governorates populated by Belarusians, rejecting the then split of the Belarusian lands between Germany and Russia.[3] The areas were claimed because of a Belarusian majority according to demographic research, although there were also numbers of Lithuanians, Poles and people speaking pidgins of Belarusian, Lithuanian and Polish, as well as many Jews, mostly in towns and cities (in some towns they made up a majority). Some of the Jews spoke Russian as their native tongue; others spoke Yiddish. 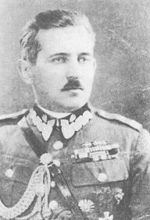 There were attempts to create regular armed forces of the newly established Belarusian republic.[4] Belarusian military units started to form within the disorganized Russian army already in 1917.

According to the historian Oleg Latyszonek, about 11 thousand people, mostly volunteers, served in the army of the Belarusian Republic[5]

General Stanislau Bulak-Balakhovich supported the Government of BNR and openly positioned his army as a Belarusian national army. However, he ignored orders of the Belarusian Government, cooperated with White Russian military leaders that opposed the idea of Belarus' independence and had ambitions to become dictator of Belarus, therefore the Council of the BNR had mostly a negative attitude towards Bulak-Balakhovich.

The major military action of the Belarusian People's Republic army was the Slutsk defence action in late 1920. The Council of the BNR, based at that time in Lithuania, sent officers to help organize armed anti-Bolshevik resistance in the town of Slutsk. The Belarusian army managed to resist a month against the greater strength of the Red Army.

Other actions of the independent Belarusian government

During its short existence the government of Belarus established close ties with the Ukrainian People's Republic, organized food supplies to Belarus from the Ukraine and thereby prevented hunger in the country.[6] Diplomatic representations of Belarus had been created in Germany, Estonia, Ukraine and other countries to lobby for Belarusian interests or to support Belarusian soldiers and refugees who landed in different parts of the former Russian Empire. 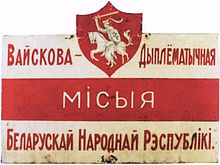 Military and Diplomatic Mission of the Belarusian Democratic Republic

Besides that, the government managed to create between 150 and 350 schools, and preparations for the creation of a University in Minsk were initiated.

Being surrounded by more powerful neighbors and having no allies, the BNR lost its independence very fast and did not become a real state with a constitution, definite territoriality, etc. However, many modern Belarusian historians suggest that creation of the Belarusian People's Republic was the reason for Bolsheviks creating the puppet Belarusian Soviet Socialist Republic and allowing some elements of national cultural life in the 1920s.

After the German army retreated from the territory of Belarus and the Red Army started moving in to establish the Socialist Soviet Republic of Belarus, in December 1918, the Rada (Council) of the BNR moved to Hrodna, which was the centre of a semi-autonomous Belarusian region within the Republic of Lithuania.[4] During the subsequent 1919 Polish invasion, the Rada went into exile and facilitated an anti-Communist struggle within the country during the 1920s.

Struggle for international recognition in the 1920s

The Belarusian Democratic Republic was officially recognized as an independent country by Germany, Austria, Lithuania, Latvia, Estonia, Finland, Poland, Ukraine, Czechoslovakia, Armenia, Georgia and Turkey.[7] Belarusian diplomatic missions were established in many of these countries.

Beginning in 1918, Anton Lutskevich, the Prime Minister of Belarus, met with Vladimir Lenin hoping to gain recognition for the independence of Belarus by Soviet Russia. The Belarusian delegation even proposed the creation of a federation with the RSFSR and the adoption of the Soviet Constitution in Belarus in exchange for Russia recognizing the independent status of Belarus, but Lenin did not agree to these proposals.[8]

When the Red Army invaded Belarus in 1919, the government of Belarus fled first to Vilnius and later to Hrodna. The government of the Belarusian Democratic Republic protested the Polish military mobilization in the area of Vilnius, the Polish elections held there, and the annexation of the Augustów area to Poland. They also appealed to the League of Nations, Great Britain, France, the USA and other countries to recognize the independence of Belarus.[9]

In April 1919 the Polish army seized Hrodna and Vilnius. Jozef Pilsudski issued the Proclamation to the Inhabitants of the former Grand Duchy of Lithuania stating that the new Polish administration would grant them cultural and political autonomy. The proclamation was welcomed by the Belarusian leadership, especially considering Soviet plans for the Russification of Belarus.[10] However, in later negotiations with the Belarusian leaders Pilsudski proposed to limit the Belarusian government's functions to purely cultural issues, which was rejected by the Belarusian prime minister Anton Lutskevich. The government of Belarus managed to include a statement for minorities' rights in Poland in the resolutions of the Paris Peace Conference.[10]

In late 1920 the Belarusian government began negotiations anew with the Bolsheviks in Moscow and tried to persuade them to recognize the independence of Belarus and to release Belarusian political prisoners being held in Russian jails.[11] The negotiations were unsuccessful. 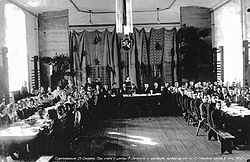 In 1925 the exiled government of the Belarusian Democratic Republic discussed relinquishing its authority in favor of the Belarusian Soviet Socialist Republic controlling the eastern part of Belarus. By that time the Soviets had implemented a rather liberal regime towards the Belarusian language and national culture and this attracted the sympathies of many Belarusian organizations and activists in West Belarus and abroad. Despite many members of the democratic government advocating this idea, the proposal was not approved.[12]

In the Second World War

During World War II, the Belarusian government-in-exile refused to cooperate with the pro-German puppet government Belarusian Central Rada and issued statements in support of the Western allies.

After the dissolution of the Soviet Union in the 1990s similar governments-in-exile of the neighboring countries (Lithuania, Poland and others) handed back their symbolic "authorities" to the corresponding independent governments. The BNR council has not done this because it did not want to hand its authority to the Communist-dominated parliament of Belarus in the early 1990s. More than that, it also sees the current Belarusian government of president Alexander Lukashenko as an anti-Belarusian, anti-independence, and an anti-democratic power.[13] 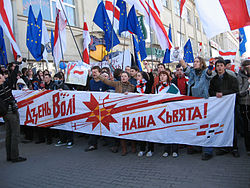 Freedom Day celebration rally held by the Belarusian opposition in 2007

The exiled government still exists and attempts to lobby interests of the Belarusian diaspora in countries where it has its representatives: USA, Canada, Great Britain, Estonia and others. It also makes regular statements about the current political situation in Belarus strongly opposing the rule of president Lukashenko. The Rada became a consolidating center for some exiled Belarusian opposition politicians like Zianon Pazniak.

Ivonka Survilla, current president of the Belarusian government in exile

Chairmans of the Council of BNR: