Muay boran (Thai: มวยโบราณ, RTGS: muay boran, IPA: [mūɛj bōːrāːn], lit. "ancient boxing") is an umbrella term for the unarmed martial arts of Thailand prior to the introduction of modern equipment and rules in the 1930s. It is thus the direct ancestor of modern Muay Thai.[1] The word muay which means "boxing" comes from the Sanskrit term mavya meaning to bind together.[citation needed] Boran or boraan means "ancient" in Thai.[citation needed]

Muay boran is not a single style but acts as an umbrella term for all traditional Thai styles of Indochinese kickboxing. Whereas Muay Thai is often called the "science of eight limbs", muay boran is said to make use of nawa awut which means "nine weapons", adding headbutts as ninth offensive in addition to the "eight limbs" of hands, legs, elbows and knees used in Muay Thai. 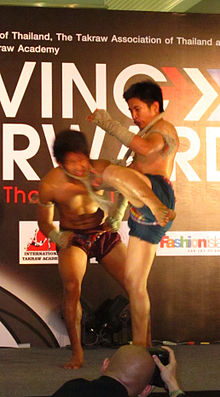 Because Ayutthaya's archives and records were destroyed by the Burmese, the early history of muay boran is difficult to establish. Its origin is said to trace back to the Ao Lai, the first Sino-Thai tribes who arrived in Southeast Asia. The Ao Lai are said to have practiced a fighting system now called muay chaiyuth but although some attempts have been made to recreate it,[citation needed] nothing conclusive is known about this extinct style. By the time of the kingdom of Sukhothai, muay chaiyuth had evolved into another system called muay pahuyuth, which today is the oldest unarmed Thai martial art in existence.[citation needed]

The Thais themselves had always referred to their empty-handed combat styles as dhoi muay (a cognate of the Malay word tomoi) or just muay, a generic term for boxing or pugilism. The teaching of muay was kept up largely by Buddhist monks who in former times also served as the community's educators.[2]

As well as continuing to function as a practical fighting technique for use in actual warfare, muay was also a combat sport in which the opponents fought in front of spectators who went to watch for entertainment. These contests were a popular form of entertainment among all social strata, and became an integral part of local festivals.

Although originally bare-knuckle, Southeast Asian boxers at some point began binding their fists and forearms in hemp rope. This type of match was called muay kaad cheuk (คาดเชือก). Many believe that, if both agreed beforehand, boxers would glue glass shards or broken shells on their hemp gloves to ensure a bloody event, but this is debatable. It is generally concurred that if this practice ever existed, it was definitely not common. Some have suggested that fighters would only apply glass to their gloves during war but not in regular matches.[2]

Muay gradually became a possible means of personal advancement as the nobility increasingly esteemed skillful practitioners of the art and invited selected fighters to come to live in the royal palace to teach the soldiers, princes or the king's personal guards. This "royal muay" was called muay luang (มวยหลวง). Some time during the Ayutthaya period, a platoon of royal guards was established, whose duty was to protect king and the country. They were known as Krom Nak Muay (Muay Fighters' Regiment). The royal patronage of muay continued during the reign of Khun Luang Sorasak, better known as Phra Chao Seua meaning Tiger King. Records state that he was so dedicated to muay that he would disguise himself in order to compete at temple fairs.

The ascension of King Chulalongkorn (Rama V) to the throne in 1868 ushered in a golden age not only for muay but for all of Thailand. Muay progressed greatly during the reign of Rama V as a direct result of the king's personal interest in the art. The country was at peace and muay functioned as a means of physical exercise, self-defense, recreation and personal advancement. At least four regional styles of the art were already in existence at the time. These were Muay Thasao from the north, Muay Khorat from the east or northeast, Muay Lopburi from the central area and Muay Chaiya from the south. There is a phrase which demonstrates the different characteristics of each style: "punch Korat, wit Lopburi, posture Chaiya, faster Thasao" (หมัดหนักโคราช ฉลาดลพบุรี ท่าดีไชยา เร็วกว่าท่าเสา).

During the 19th and early 20th centuries, the modern boxing ring was introduced and codified rules were put into place. These included the rules that the fighters should wear western gloves and cotton coverlets over their feet and ankles. Many of the old techniques were either banned or became impractical for the new type of matches. Around this time the term Muay Thai became commonly used for the new style while the older form was referred to as muay boran or ancient boxing.

Traditionally, Muay Thai masters would teach the techniques of muay boran to advanced students but this is not often done today. Professional boxers consider it a waste of training time for them to learn techniques that they won't be able to use in competitions and tournaments. Even in Thailand it is becoming increasingly difficult to find a school willing to teach it; they prefer to focus on "modern" Muay Thai, as this is more easily exploitable as a form of income. A number of styles and techniques have been lost, and Muay Korat is only staged for performances today. Muay boran was not well known in the West until it was featured in the 2003 Thai film Ong Bak starring Tony Jaa. Some schools nowadays take advantage of the art's popularity by selling Muay Thai under the name of muay boran.

When the Burmese invaded the Siamese capital of Ayutthaya in 1763, they took a group of Thai residents as prisoners. Among them were a large number of boxers, who were taken by the Burmese to the city of Ungwa.

In 1774, the Burmese king Hsinbyushin (known in Thai as King Mangra), decided to organize a seven-day, seven-night religious festival in Rangoon to honor the chedi containing Buddha's relics. The festivities included many forms of entertainment, such as sword-fighting matches, comedies and farces, and the costume plays called likay. At one point the king wanted to see how a Thai would fare against the Burmese lethwei champion. Nai Khanom Tom was selected to fight the Burmese boxer, and the ring was set up in front of the throne. Nai Khanom Tom first performed a traditional wai khru (pre-fight dance) to pay homage to Hsinbyushin as well as his teacher and all the spectators, which amazed and perplexed all the Burmese onlookers. When the fight began, he charged out, using punches, kicks, elbows, and knees, pummeling his opponent until he collapsed.

The referee however stated that the Burmese opponent was too distracted by the wai khru, and the knockout was invalid. The king then asked if Nai Khanom Tom would fight nine other Burmese champions to prove himself. He agreed and fought them all, one after the other with no rest periods in between. His last opponent was a great boxing teacher from Ya Kai city. Nai Khanom Tom mangled him with his kicks and no one else dared to challenge him any further. The king was so impressed that he remarked, "Every part of the Thai is blessed with venom. Even with his bare hands, he can fell nine or ten opponents. But his Lord was incompetent and lost the country to the enemy. ."[citation needed]

King Hsinbyushin granted Nai Khanom Tom freedom along with either riches or two beautiful Burmese wives. He chose the wives as he said that money was easier to find. He then departed with his wives for Siam. Other variations of this story had him also winning the release of his fellow Thai prisoners. His feat is celebrated every March 17 as Boxer's Day or National Muay Thai Day in his honor. Today, some have wrongly attributed the legend of Nai Khanom Tom to King Naresuan, who was once taken by the Burmese. However, Nai Khanom Tom and King Naresuan were almost two centuries apart.

The basic muay boran fighting stance is much lower and wider than in Muay Thai, much like the traditional Chinese and Indian martial arts. This required fighters to have greater agility, flexibility and speed, as well as allowing them to jump off their opponent's knee to deliver a blow to the head. The precedence given to kicks is probably indigenous[2] since Indian boxing and most southern Chinese martial arts keep even low kicks to a minimum. Muay boran has been influenced by neighboring martial arts and vice-versa, as can be seen in the Kamae Kham Sao technique which was borrowed from Cambodia.[3]

The old rules of muay boran simply consisted of a ban on hitting the groin, eye-gouging, hitting a fallen opponent, grappling or hair-pulling.[2] Weight classes did not exist and there was no specially constructed ring. Instead, matches took place in any open space surrounded by a rough circle of spectators. Rounds were timed by making a small hole into a coconut and placing it in water. When the coconut sank, a drum would be beaten to signal the end of a round.