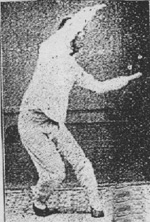 Bāguàzhǎng is one of the major "internal" (a.k.a. "Nèijiā") . "Bāguà zhǎng" literally means " palm," referring to the trigrams of the (), one of the canons of . [ Lie, Zhang. “Classical Baguazhang Volume V: Yin Style Baguazhang.” Trans. Joseph Crandall. Pinole, California: Smiling Tiger Martial Arts 1995.]

Famous disciples of Dong to become teachers were (尹福), (程廷華), (宋長榮), (劉鳳春), (馬維棋), (梁振蒲) and Liu Dekuan (刘德宽). Although they were all students of the same teacher, their methods of training and expressions of palm techniques differed. [Lie, Zhang. “Classical Baguazhang Volume V: Yin Style Baguazhang.” Trans. Joseph Crandall. Pinole, California: Smiling Tiger Martial Arts 1995.] The Cheng and Liu styles are said to specialize in "Pushing" the palms, Yin style is known for "Threading" the palms, Song's followers practice "Plum Flower" (梅花 "Mei Hua") palm technique and Ma style palms are known as "Hammers." Some of Dong Haichuan's students, including Cheng Tinghua, participated in the . In general, most Bagua practitioners practice either the Yin (尹), Cheng (程), or Liang (梁) styles of Baguazhang, although Fan (樊), Shi (史), Liu (劉), Fu (傅), and other styles also exist. (The Liu style is a special case, in that it is rarely practiced alone, but as a complement to other styles.)

The practice of circle walking, or 'Turning the Circle', as it is sometimes called, is baguazhang's characteristic method of stance and movement training. Practitioners walk around the edge of a circle in various low stances, facing the center, and periodically change direction as they execute forms. [Lie, Zhang. “Classical Baguazhang Volume V: Yin Style Baguazhang.” Trans. Joseph Crandall. Pinole, California: Smiling Tiger Martial Arts 1995.] Students first learn flexibility and proper body alignment through such exercises, then move on to more complex forms and internal power mechanics. The internal aspects of baguazhang are very similar to those of xingyi and tai chi.

Many distinctive styles of weapons are contained within baguazhang, some use concealment like the "scholar's pen" or a pair of knives (the most elaborate which are unique to the style are the crescent-shaped ). Baguazhang is also known for practicing with extremely large weapons, such as the Bāguà (八卦刀), or 'Bagua Broadsword'. Other more conventional weapons are also used like the staff, straight (double-edged) sword, and spear. Baguazhang practitioners are also known for being able to use anything as a weapon using the principles of their art.