Vovinam is practiced with and without weapons. It is based on the principle of between hard and soft. It includes training of the body as well as the mind. It uses force and reaction of the opponent. Vovinam also includes hand, elbow, kicks, escape- and levering techniques. Both attack and defense techniques are trained, as well as forms, combat and traditional wrestling. The wide range of techniques include punching, kicking etc. as well as forms, wrestling, sword, staff, axe, folding fan and others.

Self defense techniques cover defense against weaponless attacks like choking from behind and defense against attacks with knife or sword. Advanced students learn to combine the techniques and learn to defend themselves against armed opponents. Instructors train traditional weapons like the long stick, short stick, knife, sword and sabre. Thereby the weapons serve as training devices for reaching optimal control of body and mind.

The Yin & Yang-Theory (Vietnamese: "Âm-Dương") states that everything in the universe and on earth is initiated through the interrelation of Yin (negative) and Yang (positive). As to this theory there are martial arts that prefer the hard over the soft and others that prefer the soft over the hard. Vovinam Việt Võ Đạo does not prefer any over the other. Hard and Soft are used equally to adapt to every situation, to every problem.

Based on Võ-Thuật the student aims to develop the ability to combine hard and soft at the right relation, in combat and in daily life. This aiming to develop both physical abilities as well as the student's spirit. Not only the principle of the harmony of hard and soft but also many other things resulting from the training contribute to internalizing the martial art philosophy, e.g. fighting spirit, courage, tenacity, fairness, modesty and tolerance. Above all the training morality and the way of applying the techniques shape the students' character.

The greatest difficulty is to see through ones own ego and then to overcome it.

On success in doing so the Vovinam student will gain generosity and tolerance with other people.

With the awareness that the most important thing in life of a human are other humans the final goal is to be able to not only help oneself but also to help others to live in peace and harmony with ones surrounding.

With the salutation, "Iron Hand over benevolent heart" the student is reminded about the main principle and about the goal of Vovinam Việt Võ Đạo with every training. It is also about using the opponent's force and reaction, hence reach maximum effect with little force/effort.

The form of the yellow Vovinam Việt Võ Đạo logo is composed from a rectangle and a circle, angular at the top, round at the bottom. This form symbolizes the perfection of the hard and soft, the truth, good and the beautiful.

The logo is framed in a marine blue color. The red text "Vovinam" is written above the marine blue "Việt Võ Đạo". Its pointing letters show the way to the destination. Underneath lie the two poles Yin (red) and Yang (marine blue).

In the middle of the two poles the yellow map of Vietnam can be found. The symbol of Yin and Yang is framed by a thick, white circle, symbolizing the being of the Dao, with the mission to mediate in between Yin and Yang, to subdue the two, to enable life of all beings.

In his younger years he was training traditional Vietnamese martial arts. In 1938, Nguyễn introduced his style "Vovinam" to the public. After a demonstration in 1939 in Ha Noi, Vovinam quickly spread across the country, and internationally to the Vietnamese diaspora via France.

After Nguyễn's death in 1960, Grandmaster Le Sang continued the development and worldwide distribution of Vovinam until his recent death on September 27th, 2010.

The term Việt Võ Đạo ("the way (Dao) of Viet Vo") was coined by the patriarch of 2nd generation of the Vovinam Viet Vo Dao, the Grand Master Le Sang with the objective to add a philosophical dimension to his martial art. This "Viet Vo Dao" consists of ten principles:[1][3]

(The wording can vary slightly between Vovinam schools)

Belt system, the uniforms and the colors

[3] From 1938-1964, there was no official uniform. In 1964, the first Council of Masters was gathered to codify Vovinam. The color Blue was adopted as the official color for Vovinam uniforms. A separate development of the "Việt Võ Đạo Federation" in 1973 until 1990 the uniforms' color was black.

[2][3] The adult begins with a light blue belt - the same color as his/her suit. He then is a "Võ Sinh", a student aspirant. The old school Vovinam had two navy blue stripes before getting the Navy Blue Belt. But recently, some Vovinam schools have changed under the direction of Le Sang and do not have a Light Blue Belt 1 stripe, or two.

Following the light blue is the dark blue belt. Then he/she is a "Mon Sinh", a student.

Blue stands for the factor of the sea, and the hope - the hope in being successful in learning Vovinam.

With the following 3 exams yellow stripes are added to the blue belt. The 3rd yellow stripe is followed by the yellow belt. The student has reached the instructor's level.

Yellow It symbolically stands for the skin color of all people. It symbolizes the "skin deep" internalization of the martial art and the philosophy.

Following in a longer period of time, respectively 3 red stripes are added to the yellow belt. This corresponds to the 1st, 2nd, respectively 3rd Dang (Dan). The exam following the 3rd red stripe is the master's exam. Passing the exam successfully assigns the right to wear a red belt with a circulating yellow border.

Red stands for the blood and the intensive flame. The student has internalized Vovinam Viêt Võ Dao even further.

The 5th to 10th Dang are shown as a completed red belt with 1 to 6 white stripes.

White stands for the infiniteness, the bones; is the symbol of the depth of the spirit. The white belt assigns the master the absolute mastery of Vovinam Viêt Võ Dao.

On the white belt thin, lengthwise stripes in blue, yellow and red symbolize the whole of Vovinam Viêt Võ Dao again. This belt is reserved for the "Patriarch". 2005 this is Grandmaster Le Sang. 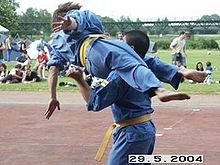 Flying scissors to the neck. The opponent is forced to the ground with a twist of the body.

Vovinam has some specialised techniques: