Donald 'Donn' Frederick Draeger (April 15, 1922 – October 20, 1982) was an expert practitioner of Asian martial arts, an author of several martial arts books, and a United States Marine. Draeger was widely known and respected in the martial arts community, and was a leading martial arts researcher[citation needed].

Throughout his life, Draeger was known by his nickname 'Donn.'[1] He held the rank of Captain during peacetime and Major during wartime in the Marine Corps. Draeger's tombstone reflects his peacetime rank of Captain. He spent several decades of his life in the Pacific area and Japan, becoming well acquainted with several classical martial arts of the region. Today, he is probably best known for his martial arts scholarship[citation needed]. 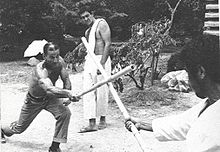 Draeger on the set of the You Only Live Twice, demonstrating bo technique (notice actor Sean Connery in the background)

Draeger was born on April 15, 1922, most likely in Milwaukee, Wisconsin.[2][3] One biographer, Paul Nurse (writing for Black Belt magazine), notes that little is known of Draeger's family background.[2] As a youth, Draeger would spend his summers living and hunting with the Chippewa people in northern Wisconsin.[2] He became a keen hunter, but would later come to disavow this pastime, only hunting for food or in self-defense.[2]

Draeger began his involvement in the martial arts in the Chicago at the age of 7.[2] His first training was in jujutsu, but he soon changed to judo and became so proficient that he achieved the rank of 2nd kyu (not far below the first black belt level) by age 10.[2] By adulthood, Draeger stood 6' 2" (188 cm) tall and weighed between 195 and 215 pounds (88 and 97 kg).[1]

Draeger joined the US Marine Corps at the age of 15, during the Great Depression.[2] He fought in the Pacific Theater during World War II.[2] Nurse considered it "a virtual certainty that Draeger was on Iwo Jima during the celebrated February–March 1945 battle that saw almost 26,000 American casualties and more than 22,000 Japanese killed."[2] Draeger also served his country during the Korean War[2] where he was promoted to Major, but later reverted to his permanent rank of Captain.

By 1948, Draeger was ranked 4th dan in judo. He co-founded the first national judo body, the Amateur Judo Association in the United States. He played an active role in the establishment of the Judo Black Belt Federation (JBBF), which later became the United States Judo Federation (USJF).[1]

Nurse relates that Draeger was once married, and had a son, but little more is known of his personal life.[2]

In his later years, Draeger spent four months a year on field trips throughout Asia.[4] While on these trips, he visited schools and studied combative methods, which he analyzed and recorded. These studies were sometimes published as articles in various martial arts magazines, or put into books.[4]

Draeger lived in Japan, China, Mongolia, Korea, Malaysia, and Indonesia. One of the books he wrote is Javanese Silat: The Fighting Art of Perisai Diri (Paperback - Mar 1979).[5] In 1979, Draeger and his team visited the island of Sumatra. While visiting the Aceh tribe there, it appears that the entire group was somehow poisoned, perhaps deliberately.[4] As a result, he developed severe amoebic dysentery, leading to hospitalization. Draeger began losing weight and he grew increasingly weak during this ordeal. His legs began to swell, causing him great pain, and he found it difficult to walk or train. His long devotion to martial arts training came to a gradual halt.[4]

While he was getting treatment at Tripler Army Medical Center in Honolulu, it was discovered that he had developed cancer of the liver. He died on October 20, 1982, at the Veteran's Hospital in Milwaukee, from metastasized carcinoma.[4]

Draeger was buried at Wood National Cemetery in Milwaukee on October 25. His grave lies in Section 4, site 377.[4][a] 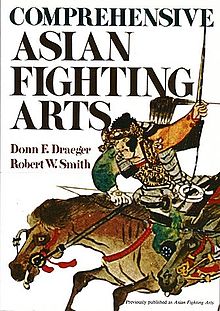 Draeger wrote many books on the martial arts. The books he wrote came to be recognized as some of the most reliable sources available in the English language.[citation needed] Shotokan karate master Masatoshi Nakayama was one of Draeger's well-known co-authors. Draeger's published works include:

Apart from scholarship, Draeger also worked briefly in film. He served as Martial Arts Coordinator for the James Bond film You Only Live Twice, where he also doubled for Sean Connery.[5]

Draeger vitalized the academic field of study called hoplology when he founded the International Hoplology Society (IHS) in the late 1950s.[6] Robert W. Smith, a long-time friend and co-author, recounted specific stories and anecdotes about Draeger in his book, Martial Musings.

Draeger continued his practice of the martial arts throughout his life. He studied with many Asian masters, partly as a result of being stationed in the Pacific Rim during his tenure in the US Marine Corps, and partly through living in Japan for more than a decade. Draeger was a member of Nihon Kobudo Shinkokai, the oldest Japanese cultural organization for the study and preservation of classical martial arts. He was also the first non-Japanese practitioner of Tenshin Shōden Katori Shintō-ryū, achieving instructor status (kyoshi menkyo) in that system.[b] He also held high ranks in Shindo Muso-ryu jodo, in judo, and in kendo, being awarded the highest rank of menkyo kaiden in Shindo Muso-ryu posthumously.[citation needed]

b. ^ Draeger was one of the translators for Otake Risuke's Deity and the Sword, one of the very few books about Katori Shinto ryū.