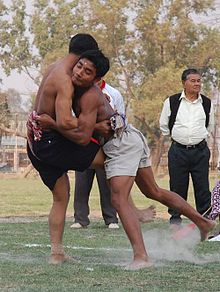 Mukna (Bengali: মুকনা) is a form of folk wrestling from the north-east Indian state of Manipur. It is popular in Imphal, Thoubal and Bishnupur. The game is generally played on the last day of the Lai Haraoba festival and is an intrinsic part of the ceremonial functions.

Matches begin with the competitors holding each other's belts called ningri. The object is to pin the opponent with their back touching the ground. The winner is called a yatra. Mukna contains many techniques (lou) which require absolute physical fitness and skill to be mastered. Holding the opponent's neck, hair, ear or legs with the hands is not permitted. Any strikes are also considered fouls. Anyone who touches the ground with any part of their body besides the feet is declared the loser. Wrestlers are paired according to weight-class. The traditional attire not only protects the players' vital points but also helps to identify the pana or the yek, to which the wrestler belongs.