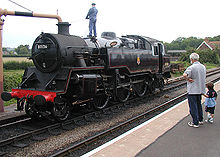 the Historical Khyber Railway goes through the Khyber Pass, Pakistan 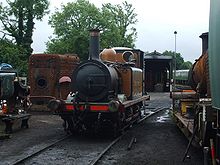 Stepney on the Bluebell railway, one of the first preserved in Britain

Heritage railways are usually railway lines which were once run as commercial railways, but were later no longer needed or were closed down, and were taken over or re-opened by volunteers or for-profit organisations. Many run on partial routes unconnected to the commercial railway network, run only seasonally, and charge high "entertainment" fares. For example the return fare from Porthmadog to Blaenau Ffestiniog on the 13 mile Festiniog railway is some £17.95 and between Caernarfon to Beddgelert £22.00 on the Welsh Highland Railway. As a result they are primarily, indeed exclusively, focused on serving the tourist and leisure markets, not local transportation needs. However in the 1990s and 2000s some heritage railways have professed to provide local transportation and to extend their running seasons to cater for commercial passenger traffic. In the United Kingdom, however, no heritage railways offer a year round daily or commuter service.

Typically a heritage railway will use steam locomotives and original rolling stock to create a supposed "period atmosphere", although some are now concentrating on more recent "modern image" diesel and electric traction supposedly to re-create the post-steam railway era.

The first heritage railway to be rescued and run entirely by volunteers was the Talyllyn Railway in Wales. This narrow gauge line, taken over by a group of enthusiasts in 1950, is recognised as the start of the preservation movement. There are now several hundred heritage railways in the United Kingdom. This large number is due in part to the closure of many minor lines in the 1960s under the Beeching Axe. These were relatively easy to revive. The first such standard gauge line to be preserved was the Bluebell Railway, though the Middleton Railway (which was not a victim of Beeching) had been preserved prior to this. The world's second preserved railway, and the first outside the United Kingdom, was the Puffing Billy Railway in Australia. This railway operates 24 km of track with much of the original rolling stock built as early as 1898.

Heritage railways differ in the intensity of the service that can be offered. Some of the more successful British heritage railways, such as the Severn Valley Railway and the North Yorkshire Moors Railway, may have up to five or six steam engines working, operating a four-train service daily. The Great Central Railway is the only example of a preserved British main line that operates with a double track, and can operate over 50 trains on a busy gala timetable. Other smaller railways may run for seven-days-a-week throughout the summer with only one steam engine. However, following the privatisation of Britain's main-line railways, the line between not-for-profit heritage railways and for-profit branch lines may appear to have blurred. The Wensleydale Railway is an example of a commercial line run partly as a heritage operation and partly (at least in intent, if not in reality) to provide local transportation. The Weardale Railway is a similar attempt to provide a commercial heritage line, so far with mixed success. The Severn Valley Railway has even operated a few goods trains on a commercial basis. In addition, a number of heritage lines now see regular freight operations. The Puffing Billy Railway operates a busier service than it regularly did in its pre-preservation working life.

In the 50 years since the Bluebell Railway reopened to traffic, the definition of private standard gauge railways in the United Kingdom as preserved railways has changed and evolved as the number of projects, length, operating days and function has altered. The 1970s distinction between narrow gauge, standard gauge and steam centres alone is no longer necessarily fit for purpose. The situation is further muddied by the huge variation in company structure of the ownership of the railway, its rolling stock and other assets. Unlike community railways the tourist railways in the UK are vertically integrated, although those operating in the main as charities have their charitable and non-charitable activities essentially separated for accounts purposes.

Distinction should be made heritage railways and preserved railways in C21st. A preserved railway should be defined as any railway that is not on a single recognised site; having perhaps more than 0.625miles/1 km, that runs from A to B, having one or more stations and the railway itself is generally accepted as the main attraction. The term heritage railway should reserved for lines that are at least 5miles/8 km in length with a minimum of three stations and the railway provides a recognisable transport function, albeit almost exclusively for tourists and enthusiasts.[citation needed]

The Dartmouth Steam Railway and Riverboat Company is the best example of a fully commercial heritage railway in the UK, whilst the self-contained Keighley & Worth Valley Railway is both a heritage railway and an out-and-out preserved railway. The Swindon & Cricklade Railway and The Battlefield Line Railway remain as archetypal short preserved railways, so typical of the 1960s and 1970s whilst the Kent & East Sussex Railway transformed in April 2000 from a preserved to heritage railway with the extension of the line to Bodiam. Many tourists and day-trippers now use the railway as an entertaining and attractive mode of transport to travel from Tenterden in order to visit the National Trust Castle.

In the United States, heritage railways are known variously as tourist, historic, or scenic railroads. Most are remnants of original railroads, such as the Cumbres & Toltec Scenic Railroad (Colorado & New Mexico) or the Heber Valley Railroad (Utah). Others are reconstructed railroads, having been scrapped at one point and then rebuilt with tourism in mind, like the Sumpter Valley Railroad (Oregon) and the Wiscasset, Waterville and Farmington Railway (Maine), or can be entire railroads, preserved in their original state using original structures, track, and motive power, like the Nevada Northern Railway (Nevada).

Some do not fit in the above categories, like Rio Grande Scenic Railroad, which is a sub-operation of the San Luis & Rio Grande Railroad. The SL&RG is primarily a freight operation, on former Denver & Rio Grande Western Railroad track, but owns and operates a steam locomotive and a fleet of passenger cars, most of which are painted in D&RGW colors.

The Train of the End of the World in southern Argentina is a 500 mm (19 3⁄4 in) (narrow-gauge) steam railway in Tierra del Fuego Province in operation since 1994.

La Trochita (El Viejo Expreso Patagónico), in English known as the Old Patagonian Express, is a 750 mm (2 ft 5 1⁄2 in) narrow gauge railway in Patagonia, Argentina using steam locomotives. It is 402 km in length and runs through the foothills of the Andes between Esquel and El Maitén in Chubut Province and Ingeniero Jacobacci in Río Negro Province.

Many heritage railways in the United States also function as living history museums, hosting annual reenactments of historic activities. In addition, they may feature an archive or library of railroad-related materials.