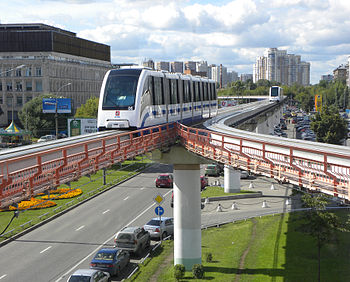 A monorail is a rail-based transportation system based on a single rail, which acts as its sole support and its guideway. The term is also used variously to describe the beam of the system, or the vehicles traveling on such a beam or track. The term originates from joining the words mono (one) and rail, from as early as 1897,[1] possibly from German engineer Eugen Langen who called an elevated railway system with wagons suspended the Eugen Langen One-railed Suspension Tramway (Einschienige Hängebahn System Eugen Langen). The transportation system is often referred to as a railway.[2] Colloquially, the term "monorail" is often used erroneously to describe any form of elevated rail or peoplemover.[3] In fact, the term solely refers to the style of track, not its elevation.

Differentiation from other transport systems

Monorail systems have found shared applications in the transportation market in airport transfer and some medium capacity metro systems. To differentiate monorail systems from other transport modes, the Monorail Society further clarifies the definition of a monorail such that the beam in a monorail system is narrower than the vehicle.[4]

Monorails are often but not exclusively elevated, sometimes leading to confusion with other elevated systems such as the Docklands Light Railway, Vancouver SkyTrain and the JFK AirTrain. Monorail vehicles are often at first glance similar to other light rail vehicles, and can be both manned and unmanned. Monorail vehicles can also be found in singular rigid format, articulated single units, or as multiple units coupled into 'trains'. In common with other advanced rapid transit systems, some monorails are driven by linear induction motor. In common with many dual rail systems, the vehicle bodies are connected to the beam via bogies, allowing curves to be negotiated.

Unlike some trams and light rail systems, modern monorails are always partitioned from other traffic and pedestrians. Monorails are both guided and supported via interaction with the same single beam, in contrast to other guided systems such as Rubber-tyred metros, such as the Sapporo Municipal Subway; or guided buses or trams, such as Translohr. Monorails also do not use pantographs.

Under the Monorail Society beam width criteria, some but not all maglev systems are considered monorails, such as the Transrapid and Linimo. Maglevs differ from all other monorail systems in that they do not (normally) physically contact the beam. 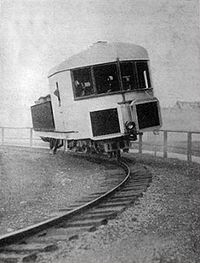 The first monorail was made in Russia in 1820 by Ivan Elmanov. Attempts at creating monorail alternatives to conventional railways have been made since the early part of the 19th century. The earliest patent was taken out by Henry Palmer in the UK in 1821, and the design was employed at Deptford Dockyard in South-East London, and a short line for moving stone from a quarry near Cheshunt, Hertfordshire to the River Lea. The Cheshunt line is notable as it was the world's first monorail to carry passengers, as well as the first railway line to be opened in Hertfordshire.[5][6]

Around 1879 a "one-rail" system was proposed independently by Haddon and by Stringfellow, which used an inverted "/\" rail. The system was intended for military use, but was also seen to have civilian use as a "cheap railway." [7]

Early designs centred on use of a double-flanged single metal rail alternative to the double rail of conventional railways. Wheels on this rail would both guide and support the monorail car. A surviving suspended version is the Wuppertal monorail. Into the 1900s, Gyro monorails, with cars gyroscopically balanced on top of a single rail, were tested, but never developed beyond the prototype stage. The Ewing System, used in the Patiala State Monorail Trainways in Punjab, India, relies on a hybrid model with a load-bearing single rail and an external wheel for balance. One of the first systems put into practical use was that of French engineer Charles Lartigue, who built a monorail line between Ballybunion and Listowel in Ireland, which was opened in 1888 and closed in 1924 (due to damage from Ireland's Civil War). The Lartigue system uses a load-bearing single rail and two lower, external rails for balance, the three carried on triangular supports.

Possibly the first monorail locomotive was a 0-3-0 steam locomotive.

A highspeed monorail using the Lartigue system was proposed in 1901 between Liverpool and Manchester.[8]

In 1910, the Brennan monorail was considered for use to a coal mine in Alaska.[9]

The first half of the 20th century saw many further proposed designs, that either never left the drawing board or remained as short lived prototypes. One of the first monorail systems planned in the United States was in New York City in the early 1930s. But the monorail was scrubbed instead for an elevated train system. [10] 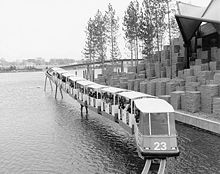 In the later half of the 20th century, monorail designs had settled on using larger beam or girder based track, with vehicles supported by one set of wheels and guided by another. These designs featured vehicles supported, suspended or cantilevered from the beams. In the 1950s the ALWEG straddle design emerged, followed by an updated suspended type, the SAFEGE system. Versions of ALWEG's technology are currently used by both of the two largest monorail manufacturers Hitachi Monorail and Bombardier.

During this period, major monorails were installed at Disneyland in California,[11] Walt Disney World in Florida, Seattle, Japan, and many other locations. Monorail systems were also heavily promoted as futuristic technology with exhibition installations and amusement park purchases, as seen by the number of legacy systems in use today. However, monorails gained little foothold compared to conventional transport systems.

Niche private enterprise uses for monorails emerged, with the emergence of air travel and shopping malls, with many shuttle type systems being built.

Perceptions of monorail as public transport 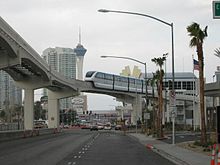 From 1950 to 1980 the monorail concept may have suffered, as with all public transport systems, from competition with the automobile. Monorails in particular may have suffered from the reluctance of public transit authorities to invest in the perceived high cost of un-proven monorails when faced with cheaper mature alternatives. There were also many competing monorail technologies, splitting their case further.

This high cost perception was challenged most-notably in 1963, when the ALWEG consortium proposed to finance the construction of a major monorail system in Los Angeles, in return for the right of operation. This was turned down by the city authorities in favour of no system at all, and the later subway system has faced criticism as it has yet to reach the scale of the proposed monorail.

From the 1980s onwards, with the rise of traffic congestion and urbanization, monorails have experienced a resurgence in interest for mass transit usage, notable from the early use by Japan and now Malaysia. Tokyo Monorail, the world's busiest monorail line, averages 127,000 passengers per day and has served over 1.5 billion passengers since 1964.[12] Monorails have also seen continuing use in niche shuttle markets, as well as amusement parks.

Modern mass transit monorail systems have settled on developments of the ALWEG beam and tyre approach, with only two suspended types in large use. Monorail configurations have also been adopted by maglev trains. 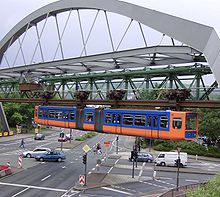 Modern monorails depend on a large solid beam as the vehicles' running surface. There are a number of competing designs divided into two broad classes, straddle-beam and suspended monorails.

The most common type of monorail in use today is the straddle-beam monorail, in which the train straddles a reinforced concrete beam in the range of two to three feet (~0.6-0.9 m) wide. A rubber-tired carriage contacts the beam on the top and both sides for traction and to stabilize the vehicle. The straddle-beam style was popularized by the German company ALWEG.

The French company SAFEGE offers a monorail system in which the train cars are suspended beneath the wheel carriage. In this design the carriage wheels ride inside the single beam. The Chiba Urban Monorail is presently the world's largest suspended monorail network.

There is also a historical type of suspension monorail developed by German inventors Nicolaus Otto and Eugen Langen in the 1880s. It was built in the twin cities of Barmen and Elberfeld in Wupper Valley, Germany, opened in 1901, and is still in operation.

Almost all modern monorails are powered by electric motors fed by dual third rails, contact wires or electrified channels attached to or enclosed in their guidance beams. However, diesel-powered monorail systems also exist.[13]

Magnetic levitation train (maglev) systems by the German Transrapid were built as straddle-type monorails, as they are highly stable and allow rapid deceleration from great speed. When in full-speed operation maglev trains hover over the track and are thus not in physical contact with it. The maglev is the fastest train of any type, the experimental JR-Maglev having recorded a speed of 581 km/h (361 mph). The commercial Shanghai Maglev Train has run at 501 km/h (311 mph).

There are also slower maglev monorails intended for urban transport, such as Japan's Linimo (2003).

Some early monorail systems (notably the suspended monorail of Wuppertal (Germany), dating from 1901 and still in operation) have a design that makes it difficult to switch from one line to another. Some other monorail systems avoid switching as much as possible, by operating in a continuous loop or between two fixed stations, as in Seattle, Washington.

Current operating monorails are capable of more efficient switching than in the past. In the case of suspended monorails, switching may be accomplished by moving flanges inside the beamway to shift trains to one line or another. 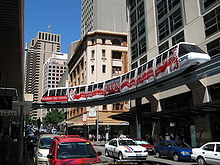 The Metro Monorail in Sydney avoids switching by operating in a single loop.

Straddle-beam monorails require that the beam structure itself be moved to accomplish switching, which originally was an almost prohibitively ponderous procedure. Now, however, the most common way of achieving this is to place a moving apparatus on top of a sturdy platform capable of bearing the weight of vehicles, beams and its own mechanism. Multiple-segmented beams move into place on rollers to smoothly align one beam with another to send the train in its desired direction, with the design originally developed by ALWEG capable of completing a switch in 12 seconds.[14] Some of these beam turnouts are quite elaborate, capable of switching between several beams or even simulating a railroad double-crossover.

In cases where it must be possible to move a monorail train from one beam to any of a number of other beams, as in storage or repair shops, a traveling beam not unlike a railroad transfer table may be employed. A single beam, at least long enough to carry a single monorail vehicle, is aligned at an entry beam to be mounted by the monorail cars. The entire beam then rolls with the vehicle to align with the desired storage beam. 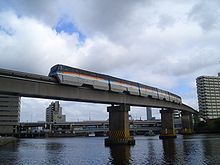