A transit pass (which can be referred by different names depending on the operator, such as bus pass) is a ticket that allows a passenger of the service take either a certain number of pre-purchased trips, or unlimited trips within a fixed period of time. Depending on the transport network and the amount of use of the pass that is made, the pass may offer varying discounts compared with trips that are purchased individually.

While transit passes can generally be purchased at full price by anyone wishing to use the services (senior citizens, the disabled, students and some others are often able to get them at a reduced price) many employers, colleges, and universities will subsidize the cost of them, or sometimes the full amount. Some public transport networks will allow certain types of personnel, including police officers, fire fighters, active military, and their own employees to ride their services for free with proper identification and without the need to purchase a pass.

Some common forms of transit passes are:

Some examples of transit passes available from various geographic are as follows:

On New York City Transit, a one-way fare is currently $2.50 per trip, and allows for free transfers between buses and subway. Weekly passes are $29, and monthly passes are $104. Multi-trip Metrocards are also available that provide a 7% discount when purchasing at least $10 of credit. Further information of New York MTA fares can be found here.

[This Needs Updating As Fare Vehicles Have Recently Changed]

While fares for individual trips vary, the Washington Metropolitan Area Transit Authority offers various passes for riding bus and Metrorail. A seven-day regular fare pass for unlimited Metrorail rides is $47, but this cannot be used on buses. A one-day rail-only pass is available for $9.00, but on weekdays, this is not valid until after 9:30 AM. A weekly Metrobus pass is available for $15 at regular fare, and it cannot be used on Metrorail.

Riders of Metrorail and Metrobus can transfer between the two services and enjoy a $0.50 discount if they use an electronic Smartrip card. Those transferring between any two Metrorail lines can change trains without exiting the gate, thereby incurring no additional fare or requiring a transfer slip.

Transfers are honored both ways between Metrobus and Montgomery County's Ride-on bus service. Ride-on accepts transfers from Metrorail for an additional 35¢ (waived for senior citizens), but there are no transfers from Ride-on buses to Metrorail.

For $102 more than the price of a MARC train monthly ticket, a Transit Link Card granting unlimited Metrorail and Metrobus trips for the month of the MARC ticket can be purchased. MARC monthly passes are also honored as fare payment for all Maryland Transit Administration bus, Metro and Light Rail services in the Baltimore area at no extra cost.

The Maryland Transit Administration within the Baltimore area generally charges $1.60 for a single trip on one local bus or train. The agency abolished transfers in 1996 in favor of day passes, which at the time were $3.00 and are currently $3.50. Those taking multi-bus/train trips are encouraged to purchase day passes, which at regular fare, are the cost of two one-way trips plus 30¢. Weekly and monthly passes are also available, and all such passes since 2005 have been called "GO-passes." The only transfers that are allowed in the system without additional fare payment are between the various lines of the light rail.

In the Portland, Oregon area there are multiple Trimet day pass options based on zone of travel. Zone one being in the central city and downtown areas and zone 2 and 3 expanding outward into the suburbs. Prices range from 2.30 to 4.75 for all zones all day with as many transfers as one wants. There are also 7 day, 14 day, and annual passes (which range from roughly $22-1000). There are student discounts and "honored citizen" AKA 65+ discount as well. see [3] for more info on passes in trimet.

In Martha's Vineyardis rare to offer an annual pass in addition to passes valid for one, three, seven, or thirty-one days. The cost of an annual pass is $100 for adults and $50 for students. All other types of passes are available at adult prices only[2].

Sound Transit, Everett Transit, Community Transit, King County Metro, Pierce Transit and Kitsap Transit offer free transfers via the ORCA Card only, and these transfers are good for two hours after the user taps the card against the reader. When using ORCA, users get full credit for the fare paid on the original trip on any trip on any of the mentioned systems. King County Metro and Pierce Transit also issue paper transfers. These transfers are valid only on the system which issued them. Commuter rail and light rail tickets are valid for one trip only, and no free paper transfers to or from rail are issued or accepted. The agency also issues universal passes, which can be loaded onto the user's ORCA card. Also, ORCA also provides services to organizations wishing to purchase transit services on behalf of their employees or students.

The Toronto Transit Commission offers free transfers with all base fares, and they are valid until the time shown at the bottom, which may vary depending on the driver. Transfers may be used only on lines connecting to the one from which the transfer was obtained.

Winnipeg Transit also offers free transfers with all base fares, and these transfers are valid for up to 60 min from the time of fare payment in what is termed power hour by the agency. The transfer is honoured on any line in the system, but the agency allows the transfer to be used even for a return trip on the same line within that time. The agency also offers weekly and monthly passes and 10-trip tickets[3]. 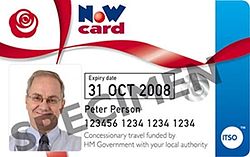 In the United Kingdom anyone over the "age of eligibility" and people with certain disabilities travel free on most public buses throughout the country at certain times (typically between 9:30 a.m. to 11:00 p.m. on weekdays and all day on weekends and Bank Holidays) through the English National Concessionary Travel Scheme. Some councils also allow these people to travel for free on trains, trams or ferries. This scheme was also introduced in Wales in 2002, in Scotland in April 2006, and later in England. Northern Ireland runs a similar scheme but the age limit is 66.

The "age of eligibility" was 60 until 6 June 2010, but it will increase over ten years to 65, in line with parallel changes to women's eligibility for state old age pension.

With the Octopus smartcard many transport operators, including bus, minibus and railway companies provide free transfers or discounts on the second leg of the journey. Also, the major bus companies, as well as MTR, the railway operator, offer a discounted flat fare for senior citizens on certain days of the week, at HK$1 and HK$2 respectively.

Greyhound Lines offers the Discovery Pass which allows unlimited travel in the United States or Canada for a period of time purchased, which may be 7, 15, 30, or 60 days. There is a greater discount per trip for passes purchased for longer periods[4] Passengers can ride anywhere throughout the US and Canada along with some destinations past the US/Mexican border.

In 2010 appeared the first non-rechargeable disposable paper-based electronic transit passes for a certain number amount of trips on trams, trolleybuses and buses. They are sold with a protective foil sticker, which should be removed prior to first use. They are not time-limited except that they expire 30 days after the countrywide or citywide fare changes, which happens usually each 1-2 years.