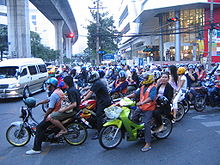 A motorcycle taxi is a licensed form of transport in some countries. Typically, they will carry one passenger (but sometimes two or more), who rides as the pillion, behind the motorcycle operator.

In Phnom Penh and other cities in Cambodia, motorcycle taxis are the primary form of public transport. Motorcycle taxi drivers are called motodups. They form in queues outside major tourist attractions, office buildings, public markets and near the corners of residential streets. In Phnom Penh, a typical motodup ride will cost around 2,000 riel. 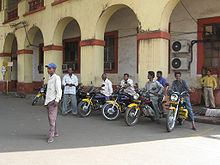 Motorcycle taxis are a licensed form of transport in Goa, India. They are much cheaper than other taxis, although the lone passenger can only carry a backpack as luggage. Motorcycle taxis in Goa are driven by men called 'pilots'. By law, in some parts of the state, the rider is expected to wear a helmet, but the pillion-rider is not. These motorcycle taxis can normally be identified by their yellow-and-black coloured paint. The fare should be fixed in advance, and the rides are not metered. 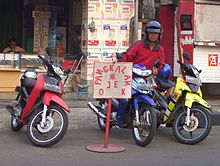 Motorcycle taxis are a very common, but unlicensed, form of transport in Indonesia. Commonly called ojek, they are present in most areas of the country, from the metropolitans where traffic jams prohibit other forms of transport to the backwater areas where four-wheeled vehicles cannot travel. Would-be passenger have to haggle with the driver for the fee, which generally lies at around IDR 10,000 for short trips.

Many motorcycle taxi drivers own their vehicles or are paying installments for them through credit. The availability of cheap Indonesian made motorcycles from Honda, Yamaha and Suzuki and some cheaper Chinese imports has combined with the ease with which to obtain driver's licenses and credit schemes and resulted in the significant growth of motorcycle taxis. However, in several areas, the motorcycles used are often stolen ones without any papers.

Indonesian law requires motorcycle riders to wear helmets, however, often only the driver does so. Sometimes drivers provide a helmet for the passenger, but more likely he will simply avoid the larger streets where police might catch the violation.

Nowadays, because of the traffic, "ojek" becomes the quickest transportation compare with any other form of transportation in Indonesia, especially in Jakarta. Many people choose "ojek" rather than taxi, because motorcycle can easily move ahead in the traffic.

In 1994-1995 there were several motorcycles working as taxis in Stockholm. Due to the Northern climate of Sweden, there is not a long period for a motorcycle taxi to work in Stockholm, and so it remains only a niche industry. Currently there is one company offering tours using two Chang jiang sidecar motorcycles.[citation needed]

Motorcycle taxis are common forms for public transport in Bangkok and most other cities, towns and villages in Thailand. They are generally used for short trips. In Bangkok, there are motorcycle taxi queues on many sois, and the queues are regulated by the city's government. Licensed motorcycle-taxi operators wear orange vests. In compliance with Thailand's helmet law, many (but not all) carry a spare helmet to offer to passengers. 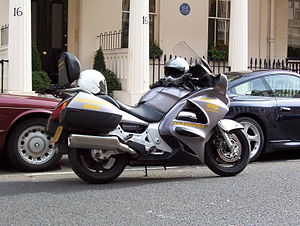 A motorcycle taxi waiting for passenger in London.

The industry began in 1990 and has established itself as a niche market, never growing past a total of 12 bikes.[citation needed] All equipment is provided for the passenger along with an intercom system linking the rider and passenger. The luggage rack means a cabin-sized suitcase can be taken on the back for convenient trips to local airports, especially Stansted, Gatwick and City. The bikes are now licensed by Transport for London and the Public Carriage Office, (PCO) who also license London's black cabs. There are currently 3 firms offering a taxi bike service based in London.

A motorcycle for hire service began in California and New York City in 2011. Like a sedan service, random passengers may not hail the motorcycles, but rather a yearly individual or corporate membership fee, plus an hourly rate, is charged. Experienced riders, many former police motorcyclists, carry clients on Honda Gold Wings, and in California can bypass traffic congestion by lane splitting.[1] Passengers are provided with helmets, airbag vests, and Bluetooth in-helmet cell phones. Besides the Gold Wings, the service bought several Can-Am Spyders before realizing they were not capable of splitting lanes.[2]