The North Yorkshire Moors Railway (NYMR) is a heritage railway in North Yorkshire, England. First opened in 1836 as the Whitby and Pickering Railway, the railway was planned in 1831 by George Stephenson as a means of opening up trade routes inland from the then important seaport of Whitby. The line closed in 1965. It was reopened in 1973 by the North York Moors Historical Railway Trust Ltd. The preserved line is now a significant tourist attraction and has been awarded many industry accolades.

The NYMR carries more passengers than any other heritage railway in the UK and may be the busiest steam heritage line in the world, carrying around 350,000 passengers in 2009.[1][Full citation needed] The 18-mile (29 km) [2] railway is the second-longest standard gauge heritage line in the United Kingdom[3] and runs across the North York Moors from Pickering via Levisham, Newton Dale, Goathland and terminating at Grosmont. Some heritage rail operations continue along Network Rail tracks to Whitby. The railway is formed from the middle section of the former Whitby, Pickering and Malton line which was closed in 1965 as part of the Beeching cuts. The NYMR is owned by the North York Moors Historical Railway Trust Ltd (a Charitable Trust and Accredited Museum) and is operated by its wholly owned subsidiary North Yorkshire Moors Railway Enterprises Plc. It is mostly operated and staffed by volunteers.

Trains run every day from the beginning of April to the end of October and on weekends and selected holidays during the winter (with no service from 24-27 December). Trains are mostly steam-hauled; however in some cases heritage diesel is used. At the height of the running timetable, trains depart hourly from each station. As well as the normal passenger running, there are dining services on some evenings and weekends. The extension of steam operated services to the seaside town of Whitby have proved extremely popular.

On 26 October 2009 the railway launched NYMR TV on its website and on youtube, produced by two local journalists David Dunning and Wendy Homewood. NYMR TV provides exclusive footage and interviews reflecting life on and around the line and is updated every month.

The North Yorkshire Moors Railway was first opened in 1836 as the Whitby and Pickering Railway. The railway was planned in 1831 by George Stephenson as a means of opening up trade routes inland from the then important seaport of Whitby. The initial railway was designed and built to be used by horse-drawn carriages. Construction was carried out by navvies and coordinated by top engineers. Their three main achievements were cutting a 120 yard tunnel through rock at Grosmont, constructing a rope-worked incline system at Beck Hole and traversing the marshy and deep Fen Bog using a bed of timber and sheep fleeces. The tunnel is believed to be one of the oldest railway tunnels in the world. In its first year of operation, the railway carried 10,000 tons of stone from Grosmont to Whitby, as well as 6,000 passengers, who paid a fare of 1 shilling to sit on the roof of a coach, or 1 shilling and 3 pence to sit inside. It took two and a half hours to travel from Whitby to Pickering.

In 1845, the railway was acquired by the York and North Midland Railway who re-engineered the line to allow the use of steam locomotives. They also constructed the permanent stations and other structures along the line which still remain today. The Beck Hole Incline was re-equipped with a steam powered stationary engine and iron rope. They also added the line south from Pickering so that the line had a connection to York and London. In 1854 the York and North Midland Railway became part of the North Eastern Railway. Steam locomotives could not operate on the Beck Hole incline; so in the early 1860s the North Eastern Railway started construction of an alternate route which opened in 1865 – this is the route which is still in use today. The original route is now a 3.5-mile (5.6 km) rail trail named the Historic Rail Trail.[citation needed]

In 1923 the North Eastern Railway was absorbed into the London and North Eastern Railway as a result of the Railways Act 1921. In 1948 nationalisation meant that British Railways took control. During this time, little changed on the line. However, in his controversial report, Dr Beeching declared that the Whitby-Pickering line was uneconomic and listed it for closure, which took place in 1965.

In 1967, the NYMR Preservation Society was formed, and negotiations began for the purchase of the line. After running various Open Weekends and Steam Galas during the early 1970s (by permission of British Railways) the NYMRPS transformed itself into a Charitable Trust (to ensure the future of the railway) and became The North York Moors Historical Railway Trust Ltd. Purchase of the line was completed and the necessary Light Railway Order obtained, giving powers to operate the railway. The railway was able to reopen for running in 1973 as the North Yorkshire Moors Railway, with much of the traction provided by the North Eastern Locomotive Preservation Group.

The preserved line is now a significant tourist attraction and has been awarded many industry accolades. 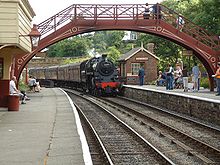 The possibility of reopening the 'missing section' between Rillington Junction (on the York – Malton – Scarborough line) and Pickering has often been discussed. This might allow the running of steam services from York to Whitby again (or even Scarborough to Whitby, if the short lived curve towards Scarborough were reinstated too). To achieve this would require considerable engineering work, not least in getting out of Pickering where a new road and several houses have been built on the track bed.

Reinstating this missing rail link was adopted as a policy objective by the North Yorkshire County Council some years ago; the NYMHRT board agreed to support this policy in principle, whilst having reservations about its implementation.

A more detailed discussion of this topic, with some of the possible advantages and disadvantages from the NYMR point of view can be found in the North Yorkshire Moors Railway Conservation Management Plan (available from the NYMR).

In March 2009, the railway announced that one of its bridges near Goathland needed to be repaired/replaced over the winter of late-2009/early-2010, otherwise the railway would be forced to close. The railway therefore launched an appeal to raise £1 million to cover the costs of the bridge work with any excess raised going towards the restoration of locomotive 80135. The money was raised in time, and the bridge was replaced over the winter-Christmas/new year period of late-2009/early-2010, with the first trains crossing over the new bridge in late March 2010.

The NYMR runs several special events through the year, usually revolving around a particular theme. 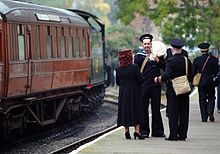 Other special events include a Vintage Vehicle Weekend, Music on the Moors and a Wizard Weekend.

The railway has been seen both on television and in film. The station at Goathland has been used as both Hogsmeade Station in the Harry Potter films, and Aidensfield in the popular sixties drama Heartbeat. Pickering Station was used in the film Possession and Keeping Mum. Other appearances include Casualty, Brideshead Revisited, All Creatures Great and Small, The Royal, Poirot and Sherlock Holmes television series. The railway has also featured in the documentary Yorkshire Steam which ran for two series on local television and in the second series of Great British Railway Journeys.