General view, including engine sheds, of part of the site on a cold January day

A reconstruction of Isambard Kingdom Brunel's atmospheric railway, using a segment of the original piping at Didcot Railway Centre

Didcot Railway Centre, located in the town of Didcot in the English county of Oxfordshire, is based around the site of a comprehensive "engine shed" which became redundant after the nationalisation of the UK railways, due to the gradual changeover from steam to diesel motive power.

The Great Western Society was offered the use of the Didcot Motive Power Depot site and took it over in 1967. The society has a comprehensive collection of ex Great Western Railway (GWR) locomotives and rolling stock. There are two short lengths of running track, each with a station at both ends.

The shorter of the two lengths – the 'branch line' – has a wayside halt station named Didcot Halt at one end while at the other end is the transshipment shed dating from broad gauge days, when it was used for transferring goods from broad to "narrow" (i.e. standard) gauge rolling stock and vice-versa. It has been carefully moved and reconstructed from its original site nearby. This is where the broad gauge (7 ft 0 1⁄4 in (2,140 mm)) Firefly replica, completed in 2005, can normally be found.

The other length of track has a pre-fabricated concrete station platform (from Eynsham) at one end next to the entrance, and a newly built platform at the other end. Long-term plans include the reconstruction of the Brunel-designed building from Heyford station on this platform.

The site retains many original GWR features including the engine shed, turntable pit and coaling stage from the 1932 rebuilding. The turntable itself is a Southern Railway one which came from Southampton Docks.

The centre regularly holds events such as steam and diesel railcar days. Members of the Great Western Society are active in the preservation of locomotives and rolling stock - as of 2005 several locomotives such as King Edward II are being restored from scrapyard condition. Certain 'new-build' projects to create locomotives that did not escape wholesale scrapping are also undertaken at Didcot, such as the completed Firefly locomotive mentioned above, a 'Saint' class locomotive (using a 'Hall' class chassis and boiler), a 'County' class locomotive (using a 'Hall' class chassis and an LMS '8F' class boiler), and a steam railmotor (using an autocoach that was rebuilt from a railmotor in the 1930s).

The railway centre is accessed from a subway at Didcot Parkway railway station, which links the centre by rail to London and much of southern and central England. Wheelchair and pram access is practically nonexistent; they have to be carried up a flight of concrete steps. Although this contravenes the Disability Discrimination Act, the Great Western Society is unable to improve it since the site is owned by Network Rail.

History and future of the site

After being given use of the site from 1967 onwards, the Great Western Society (GWS) negotiated a long-term lease from the early 1970s which will expire in 2019. However, the present lease is subject to a six-month termination clause which could force the GWS to quit the site, and which can be operated at any point in time by Network Rail (NR).

In an attempt to secure a long-term future for the society, in 2002 the GWS opened negotiations with NR to either purchase the site or extend the lease. In a letter dated May 2007, NR informed the GWS that they were prepared to sell the site subject to Office of Rail Regulation (ORR) approval. It had been thought the site could be subject to need as a depot, either due to the rebuilding of Reading station; a Crossrail project depot; or the Intercity Express Programme. After expressing some concern at the slow speed of negotiations at the GWS annual meeting in September 2008, NR wrote to the GWS to advise that the site was no longer available for sale, and although a lease extension was still on offer it was still subject to the previous six-month termination clause. The GWS have written to their local MP Ed Vaizey, and placed any long term development plans on hold.[1] 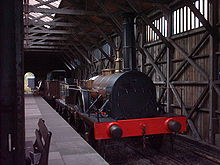 The following locomotives have all been restored to working order since withdrawal from British Railways but their boiler certificates have expired, hence they cannot be steamed until they have each undergone a major overhaul.

Some Year 12s from Reading School are restoring a Slate waggon, which will be placed in the museum when they finish.