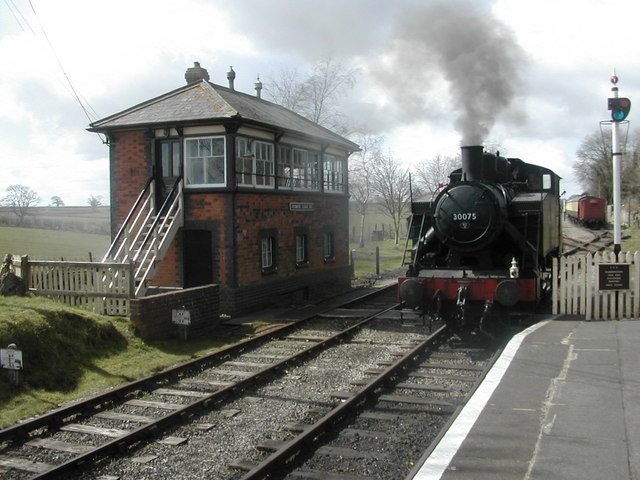 
map_state = collapsedLocation map
Somerset
lat=51.1896
long=-2.4787
width=180
float=right
caption="East Somerset Railway shown within "
(gbmapping|ST665435)
The East Somerset Railway is a convert|2.5|mi|km|0|lk=on in , running between Cranmore and Mendip Vale. Prior to the , the railway ran from Witham to Wells, meeting both the and at the latter station.

The line was built in 1855 as a line. The line was originally between Witham railway station and and this line opened on . It was later extended to Wells: this part of the line was opened on . The East Somerset Railway was bought by the on 2nd December 1874.

In 1878, the GWR joined the East Somerset line with the to Wells, which had been built by the , by obtaining running rights over a section of the and running its trains through the S&DJR Wells station at Priory Road, though GWR trains did not stop at Priory Road until 1934. The broad gauge railway caused difficulties where it connected with other lines and in 1892 it was converted to . At this stage, the main traffic became the through trains from Yatton to Witham and the East Somerset Railway station in Wells closed, with Wells (Tucker Street) becoming the station for the city on the line. The Yatton to Witham service remained in use with the GWR and later BR until passenger service finally ceased in 1963 as a result of the , however trains carrying continued until 1985.

In 1972 the artist David Shepherd purchased Cranmore station and a section of the track to house and run his two locomotives the BR 2-10-0 Class 9F no. 92203 "Black Prince" and the standard 4 - Green knight. [cite web|url=http://www.eastsomersetrailway.com/page.php?pid=34|title=History|work=East Somerset Railway|publisher=East Somerset Railway|accessdate=2008-07-08] In 1973 the line opened offering Brake Van rides before extending first to Merryfield in 1980 and then to Mendip Vale and into Cranmore station itself in 1985.

Today the railway plays host to a variety of preserved diesel and steam locomotives.

The East Somerset Railway only operates the line between Cranmore, Cranmore West, Merryfield Lane Halt and Mendip Vale. Between the last two sections the train runs through the . [cite web|url=http://www.english-nature.org.uk/citation/citation_photo/1004006.pdf|title=Doulting Railway Cutting|work=SSSI citation sheet|publisher=English Nature|accessdate=2008-07-08] The section between Cranmore and the mainline is used for heavy quarry traffic to the nearby .

In 1991 a new station building was constructed at Cranmore which now includes a cafe, booking office, gift shop and toilets. The platform then extends to the old station which is now a museum, and past a 1926 (one of only 50 made) which incorporates a stamp machine and post box. [cite web|url=http://www.eastsomersetrailway.com/page.php?pid=16|title=Cranmore Station|publisher=East Somerset Railway|accessdate=2008-07-08]

Opposite the platform is a dating from 1904 and is the standard GWR pattern of the period.

Close to Cranmore station are the engine shed and workshop which were built in 1973.

An order by the Secretary of State for Transport in 2005 allowed a further 600 metres of track to be used. [cite web|url=http://www.dft.gov.uk/pgr/twa/dl/theeastsomersetrailwayorder|title=The East Somerset Railway Order|publisher=Department of Transport|accessdate=2008-07-08]

On the East Somerset Railway announced that it had received a £7,500 grant from Shepton 21 Group, a local organistation, set up to regenerate the area around Shepton Mallet. The money will be spent on conducting a feasibility study into extending the line towards Shepton Mallet, with a possible new terminus at Cannards Grave, on the outskirts of Shepton Mallet. [cite web|url=http://www.eastsomersetrailway.com/newsitem.php?item=198|title=Press Release|publisher=East Somerset Railway|accessdate=2008-07-08]

The railway hosts several events throughout the year

As well as the permanent collection listed above, the railway also regularly plays host to visiting steam and diesel engines, details of which can be found on their website.