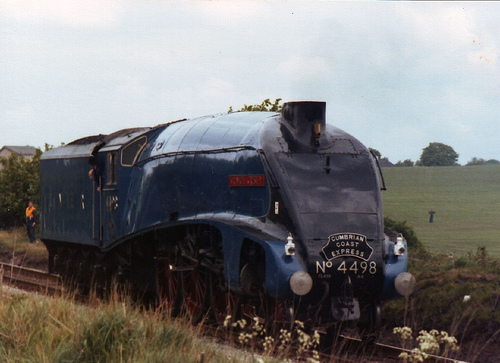 As with the other members of the 35-strong class, "Sir Nigel Gresley" wore many liveries throughout her career. She was released to traffic on in the standard LNER garter blue of the A4 Pacifics. New numbers and letters for the tender in stainless steel were added in a general overhaul . "Sir Nigel Gresley" was repainted into wartime black with LNER markings on . The next repaint was into black with NE markings on , as a cutback. After the war, "Sir Nigel Gresley" regained LNER garter blue livery with red/white lining on March 6th 1947. With the formation of came new liveries and "Sir Nigel Gresley" was painted into British Railways dark blue with black and white lining on . The final livery change was into British railways brunswick green livery on April 17th 1952. In preservation, "Sir Nigel Gresley" wore garter blue (with stainless steel letters and numbers as 4498 added later) from 1966 until her overhaul in the late 1990s, when she gained her current British Railways blue livery as 60007. This livery was retained again after the 2006 overhaul.

As with the earlier LNER A4 Pacifics, "Sir Nigel Gresley" was built with single chimney and side valances covering the wheels. The valances were removed to aid in maintenance on February 21st 1942. "Sir Nigel Gresley" gained her double chimney and Kylchap double blastpipe on December 13th 1957. 60007 also gained AWS (Automatic Warning System) equipment on September 27th 1950. A Smith-Stone type speed recorder was fitted on June 30th 1960.

Built for the LNER in 1937, and the 100th Gresley Pacific built. Her Doncaster Works number was 1863. It was originally numbered 4498. It is a locomotive to the same design by as the more famous "Mallard".

Locomotive 4498 was actually due to receive the name "Bittern", originally suggested for 4492 (later "Dominion of New Zealand"). So the story goes, an LNER enthusiast who worked in the Railway Correspondence and Travel Society, realised in time that 4498 was the 100th Gresley Pacific locomotive and the suggestion was made that the locomotive be named after her designer. The name "Bittern" was later carried on 4464.

"Sir Nigel Gresley" received a repaint at Doncaster Works February 25th 1938, and larger coal space was also provided as the locomotive was displayed at an exhibition in Manchester. "Sir Nigel Gresley" was also used for the opening of the Rugby testing station from August 23rd - October 8th 1948. 60007 was placed onto the rollers without her tender and run up to high speeds to monitor the coal and water usage of the locomotive.

"Sir Nigel Gresley" is the holder for the post-war steam record speed of 112mph gained on the and carries a plaque to that effect. As with Mallard's record. this was descending southward from Stoke Summit, but unlike Mallard's run which was a special attempt, this was with a full train of passengers returning from an excursion to works. The excursion exceeded 100 mph on two other occasions on the same day. Unfortunately, because of a paper strike at the time, the logs of these are not as accessible as for some other workings.

Withdrawn from service by on , it was targeted by the A4 Preservation Society, which was soon renamed the A4 Locomotive Society, to rescue the locomotive from the cutter’s torch. This was achieved, and the ‘Streak’ was moved to for refurbishment. Fellow A4 No 60026 Miles Beevor also subsequently visited the former LMS works after its own withdrawal, and its three pairs of 6 ft 8 in driving wheels were transferred to No 60007 because they were in a far better condition than those on the newly saved engine [http://www.heritagerailway.co.uk/headline.htm]

For a long period of her preservation, "Sir Nigel Gresley" was kept at Steamtown Carnforth, at the old locomotive depot. This was a prime location for her mainline operations, being the only mainline A4 after 1973 other than "Union of South Africa". On the occasion of the 50th anniversary of "Mallard"'s record run, on July 3rd 1988, the assembled 3 of the 4 UK-based A4 Pacific locomotives at the museum, this had not been done before in preservation. Early in early July 2008, SNG joined her three sisters extant in the UK for a display at the National Railway Museum in York.

By 1994, "Sir Nigel Gresley" stayed at the , before spending some time at the . The locomotive is now preserved at the , and is in daily operation, following a 10 year overhaul to working order. It is owned by [http://www.sirnigelgresley.co.uk/ Sir Nigel Gresley Locomotive Preservation Trust] Ltd. and operated by the A4 Locomotive Society Ltd. on behalf of the Trust.

* cite book
first = W.B.
last = Yeadon
title = Yeadon's Register of LNER Locomotives: Volume Two: Gresley A4 and W1 classes.
publisher = Booklaw/Railbus is association with Challenger
ISBN 1 871608 15 5
year = 2001 Histories of the A4 and W1 classes of locomotive with details of repairs and liveries etc.