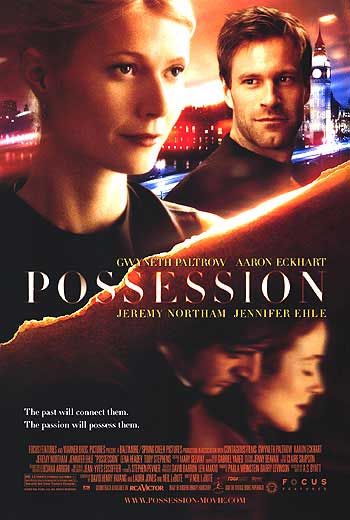 "Possession" is a motion picture written and directed by , based on the novel of the by . The film tells the story of two scholars, Roland Michell (played by ) and Maud Bailey (), who investigate the affair of fictional poet Randolph Henry Ash (), described in letters between him and another fictional poet, Christabel LaMotte ().

Early drafts of the film's screenplay were written by playwright in the nineties, but the project languished in pre-production for years (with directors like and working on the film and eventually giving up) before LaBute came aboard.

LaBute recalled, "What she basically said was, 'This is Roland on the page; you must make him different in a film!' She got that Roland needed more drive. Just seeing those notes kind of gave me the keys to the kingdom. And so in the film, Roland keeps making these wild, imaginative leaps about the poets' lives, and Maud's both charmed and appalled." LaBute changed Roland's nationality from British to American, in what he denied was "shameless pandering to the audience....in part, it was [just] more comfortable for me to write Roland that way."