The signalling on the Looe Valley Line is operated by the train crew instead of a signaller, but is sufficient to allow freight trains to operate between passenger services

In the United Kingdom, a community rail line is a local railway which is specially supported by local organisations. This support is usually through a Community Rail Partnerships (CRP) – comprising both the railway operator, local councils and other community organisations – or sometimes by Rail User Groups (RUG). Community railways are managed to fit local circumstances recognising the need to increase revenue, reduce costs, increase community involvement and support social and economic development.

The Association of Community Rail Partnerships (ACoRP) supports its fifty or so member CRPs in the United Kingdom and also offers assistance to voluntary Station Friends groups that support their local stations through the Station Adoption scheme. Since 2005 the UK's Department for Transport has formally designated a number of railway lines as community rail schemes in order to recognise the need for different, more appropriate standards than are applied to main line railway routes, and therefore make them more cost effective.

The Association of Community Rail Partnerships is funded by the Department for Transport as an umbrella group to support CRPs and Station Friends groups. The Association shares ideas and best practice among its members through various channels including conferences and seminars and a quarterly magazine Train Times, also a monthly electronic newsletter. An annual Community Rail Awards event is held each autumn on a different community railway around the country each year.[1]

There are more than 50 CRPs in the United Kingdom, [2] most supporting just one line but some, such as the Devon and Cornwall Rail Partnership encompass several nearby routes. 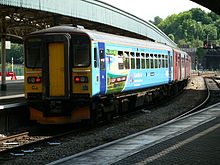 the special livery on 153329 promotes the St Ives Bay Line

The Department for Transport announced a pilot project in 2005 under their Community Rail Development Strategy,[2] with the intention of having seven differing lines test out different types of community rail schemes. The aims of these schemes[3] are to:

Designation does not physically separate a line from the rest of the network or remove it from either Network Rail or franchise operation. It is not generally intended to be used as a mechanism to reopen lines or create "microfranchises", although these options may be investigated on some routes.

In addition each line has a remit agreed in a "Route Prospectus" which gives more detailed aims and objectives for each scheme, such as infrastructure improvements, new ticketing arrangements, or cooperation with other local transport operators.

The DfT has identified about 50 routes in England and Wales that would benefit from designation, covering 10% of Network Rail and some 390 stations. [2] Some routes will only be designated as community rail services (rather than community rail lines) as the infrastructure may be used by other operators in a way that precludes designation. The routes designated so far are: 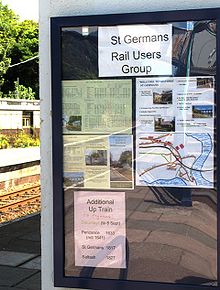 A number of smaller stations have been supported by local voluntary groups for many years. The concept has now been formalised by many train operating companies which operate Station Adoption schemes.

Station "friends" groups or "rail user" groups care for their local station in various ways such as planting flower beds and litter clearance. Many of them actively promote the train service by printing and distributing timetable leaflets, maintaining community noticeboards at their station, and even operating websites.