Church of St. Sophia, Ohrid, the first synod church of the Archbishopric of Ohrid, depicted on the church's emblem 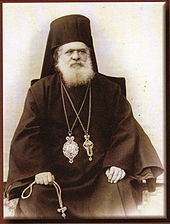 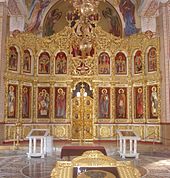 Iconostasis of Holy Trinity in Radoviš 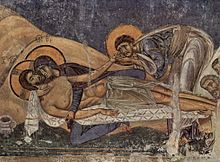 Lamentation of Christ (1164). Fresco from Nerezi near Skopje

After the fall of the First Bulgarian Empire, Emperor Basil II acknowledged the autocephalous status of the Bulgarian Orthodox Church and by virtue of special royal decrees set up its boundaries, dioceses, property and other privileges. The Archibishopric was seated in Ohrid in the Byzantine theme of Bulgaria and was established in 1019 by lowering the rank of the autocephalous Bulgarian Patriarchate and its subjugation to the jurisdiction of the Patriarchate of Constantinople.[6][7] In 1767 the Archbishopric was abolished by the Turkish authorities and annexed to the Patriarchate of Constantinople. Efforts were made in 19 and the first part of 20 century to restore the Archdiocese, and in 1874 it became part of the new established Bulgarian Exarchate. The Christian population of the bishoprics of Skopje and Ohrid voted in 1874 overwhelmingly in favour of joining the Exarchate, the Bulgarian Exarchate became in control of most of the Macedonian region.

Today, the Macedonian Orthodox Church has about 1200 churches in Macedonia organized in 10 eparchies, whose bishops make up the "Holy Synod of Bishops", headed by the "Archbishop of Ohrid and Macedonia". At its session in 1994, the Holy Synod stated that

After Archbishop Mihail was elected in as head of the Macedonian Orthodox Church in 1993, he stated that the church wanted to cooperate with neighboring Greek, Bulgarian, and Serbian churches. He hoped that:

Relations with the Serbian Orthodox Church 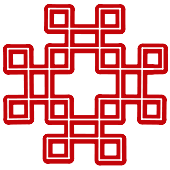 Macedonian cross - one of the symbols of the church.

Since the breakup of Yugoslavia, the Serbian Orthodox Church has been seeking to restore its control over the Macedonian Orthodox Church.[9] The Macedonian church sees these efforts, supported by other Orthodox churches,[9] as closely connected to the Serbian government agenda. The main issue of dispute mainly revolves around the church's autocephaly, although there are some other minor issues including Macedonia's Serb Orthodox minority (according to the last census, there are 40,000 citizens of the country declared as Serbs) and the question of some hundreds of Serb Orthodox shrines from the medieval Nemanjić period.

The two Churches had been negotiating the details of a compromise agreement reached in Niš, Serbia in 2002, which would have given the ethnic Macedonians de facto independent status just short of canonical autocephaly. The agreement was signed and agreed upon by three Bishops in the Macedonian Orthodox Church (Metropolitan Petar of Australia, Metropolitan Timotej of Debar and Kicevo; and Metropolitan Naum of Strumica). After political officials exerted pressure on the clergy of the MOC for accepting the agreement, the Bishops later reneged on the agreement, leaving only Archbishop Jovan of Ohrid (secular name Zoran Vraniškovski) from the Macedonian side in agreement. Suddenly the signed agreement was rejected by the Macedonian government and the Holy Synod of MOC. In turn, the Serbian Orthodox Church granted full autonomy to the Orthodox Ohrid Archbishopric, its embattled branch in the Republic of Macedonia, in late May 2005 and appointed Jovan as its Archbishop.

The later chain of events turned into a vicious circle of mutual accusations and incidents involving SOC and, partly, the Serbian government on one side, and MOC, backed by the Macedonian government on the other. The Macedonian side regarded Jovan as a traitor and Serbian puppet. Jovan complained of a new state-backed media campaign against his Church. "They are creating an unstable, explosive atmosphere among the population and are virtually inviting people to lynch us," he told Forum 18 News Service.[10] The government has denied registration of his Church,[11] attacked its places of worship and launched a criminal case against him. He was arrested, removed from his bishopric and then expelled from the country. He returned in 2005 and, after attempting to perform a baptism, he was arrested, and sentenced to 18 months in prison [12] and jailed[13] with "extremely limited visitation rights".[14] On March 19, 2006, after spending 220 days in prison, archbishop Jovan was released [1].

In turn, SOC denied a Macedonian delegation access to the monastery of Prohor Pčinjski, which was the usual site of Macedonian celebration of the national holiday of Ilinden (literally meaning St. Elijah Day) on August 2 [15] and the site where the First Session of ASNOM was held. Macedonian border police often denied Serbian priests entry into the country in clerical garb.[16]

Despite public appeals from both churches for "Christian brotherhood and unity", both sides did little to settle the dispute. 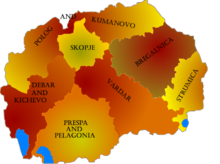 Map of the seven diocese of Macedonia

As of 2005, the Macedonian Orthodox Church is headed by Archbishop Stephen of Ohrid and Macedonia. He presides over the Holy Synod of Hierarchs of the church, consisting of 9 metropolitans and titular bishops.

Dioceses on the territory of Republic of Macedonia

Dioceses outside the Republic of Macedonia

Outside the country, the church is active in 3 dioceses in the diaspora. The 10 dioceses of the church are governed by ten Episcopes, with around 500 active priests in about 500 parishes with over 2000 churches and monasteries. The church claims jurisdiction of about twenty living monasteries, with more than 100 monks.

Church calendars follow the old Julian Calendar, and use the archaic names of the months of the year instead of the common Latin-derived names