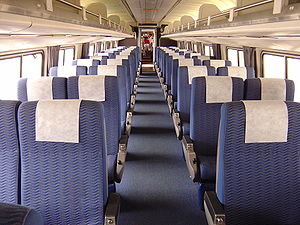 Interior of an Amfleet II coach, used on the Silver Meteor 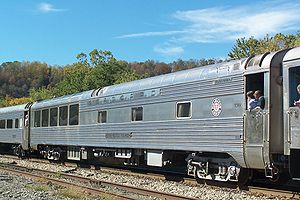 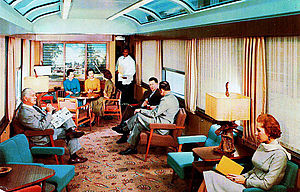 Interior of SAL "Sun Lounge" car. Regular dome cars were too high for the low tunnel clearances on the Northeast Corridor used by SAL trains north of Washington

A typical Silver Meteor train consists of the following cars:

The Silver Meteor was originally a train of the Seaboard Air Line Railroad (SAL), placed in service on February 2, 1939.[2] "Silver Meteor" was the winning entry of a young African American named James Harvey Talley from La Crosse, Virginia. The train was operated between New York, NY, and Washington, DC, by the Pennsylvania Railroad under a haulage agreement. Between Washington and Richmond, it used the tracks of the Richmond, Fredericksburg and Potomac Railroad, jointly owned by the SAL and five other railroads for the use of all. From Richmond south, the SAL's own trackage was used, running via Raleigh, North Carolina, Columbia, South Carolina, Savannah, Georgia, Jacksonville, Florida and Ocala, Florida. Until the late 1960s, the Silver Meteor split at Wildwood, Florida, with one section continuing to Miami, Florida, and the other serving St. Petersburg and Sarasota-Venice on Florida's west coast.

The SAL merged with the Atlantic Coast Line Railroad to form the Seaboard Coast Line Railroad in 1967, and on May 28, 1968 the Silver Meteor began serving only Miami (the similarly-routed Silver Star then served only St. Petersburg). Amtrak continued to operate the Silver Meteor when it took over operations on May 1, 1971; on November 14, the numbers 83 (southbound) and 84 (northbound) were assigned.

From December 17, 1971, to April 15, 1972, and September 10, 1972 to April 27, 1973, the Silver Meteor bypassed Jacksonville, running over the track between the Georgia state line and Baldwin, Florida. Between June 11 and September 10, 1972, the Silver Meteor was extended to Boston and called the Meteor. Service to St. Petersburg was also returned, with the train splitting at Auburndale.

On September 30, 1979, the Silver Meteor was rerouted between Savannah and Jacksonville over the former Atlantic Coast Line Railroad route, due to the abandonment of the old SAL route. On January 31, 1984, the Silver Meteor's Florida west coast terminus was cut back from St. Petersburg to Tampa , thus ending almost 100 years of rail passenger service to St. Petersburg. By October 26, 1986, the Silver Meteor had shifted to the old ACL route north of Savannah, as the abandonment of the SAL route north of Raleigh affected only the Silver Star. On June 11, 1988, the tracks between Coleman and Auburndale, Florida were abandoned, shifting the Miami section west to Lakeland.

The best timing for Amtrak's Silver Meteor between Miami and New York City was 27 hours in 2008 whereas SAL's first edition took only 25 hours in 1939, almost 70 years ago. Late trains routinely add even more hours to today's schedules.

In the January 2011 issue of Trains Magazine, this route was listed as one of five routes to be looked at by Amtrak in FY 2011 as the previous five routes (Sunset, Eagle, Zephyr, Capitol, and Cardinal) were examined in FY 2010.[3]

The Silver Meteor operates over Amtrak and CSX Transportation trackage: