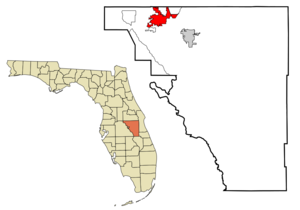 mapsize = 250x200px
map_caption = Location in Osceola County and the state of

Founded in the mid-19th century as Allendale, it was renamed Kissimmee when incorporated as a city in 1883. Its growth can be credited to of , who based his two-million acre (8,000 km²) operation out of the small town. Disston had contracted with the financially wobbly state of Florida to drain its southern lands, for which he would own half of all he successfully drained. This deal made Disston the largest single landowner in the United States.

Disston's and required a small industry to transport people and goods along the new waterway. The Kissimmee was responsible for building most of these steamships, which were just one jump ahead of civilization -- with Kissimmee as the jumping off point. Concurrently, the was growing and extended the end of its line from Sanford down to Kissimmee, making the town on a for . On , , the incorporated the .

But the heyday of Kissimmee was short lived. Expanding s began to challenge the steamships for carrying and passengers. By 1885, the South Florida Railroad had extended its tracks again to Tampa. The was the worst depression the U.S. had experienced, crushing land speculation and unsound . Hamilton Disston closed his Kissimmee land operation. Back to back freezes in 1894 and 1895 wiped out the industry. The freezes, combined with 's growth and the relocation of steamship operations to , left Kissimmee dependent on .

Ranching remained an important part of the local economy until the opening of nearby Walt Disney World in 1971. After that, and development supplanted cattle ranching to a large measure; however, cattle ranches still operate nearby, particularly in the southern part of Osceola County.

On , , passed through Kissimmee with winds in excess of 100 miles per hour, damaging homes and buildings, toppling trees and cutting electrical power to the entire city. restored power to 54 percent of the residents in the first 72 hours; 85 percent were restored within one week. Service was restored to all customers on August 28. Three weeks after Hurricane Charley, the area was struck by , followed by three weeks after Frances.

There were 17,121 households out of which 37.4% had children under the age of 18 living with them, 47.2% were married couples living together, 15.8% had a female householder with no husband present, and 31.0% were non-families. 20.9% of all households were made up of individuals and 4.9% had someone living alone who was 65 years of age or older. The average household size was 2.77 and the average family size was 3.21.

Kissimmee has an Amtrak train station, which is projected to be a station stop on the proposed system. There is also a Greyhound bus station. Local bus service is provided by the Lynx network.

offered nonstop service to 12 cities on , but those services ended when the company suspended all operations in September 2008..

The conduct in Kissimmee, at . The stadium also hosts numerous amateur baseball events throughout the remainder of the year in conjunction with; , Triple Crown Sports, World Baseball Federation and Promotion Sports. The Jim Evan's Academy of Professional Umpiring has also called Osceola County Stadium home since 1994.

The is a facility of five (5) softball fields which are host to a variety of amateur sports events. It is the home of the 2005 Complex of the Year Award, the Rebel Spring Games, and numerous other fast-pitch softball, slow-pitch softball, and youth baseball events.

is another athletic facility in the area that is host to a variety of annual events.

Osceola Heritage Park is an event facility featuring a concert arena () and professional sports stadium (). The Silver Spurs Arena has been host to many acts, ranging from and to an annual rodeo event. also use The Silver Spurs Arena for their annual District Conventions. In 2008, a number of English and Spanish conventions will be held by the Witnesses, bringing thousands of delegates to the Kissimmee area for the three-day events.

Kissimmee is home to a 650-person capacity outdoor water park, in addition to multiple golf courses.

Kissimmee is also home to the Loop, a large outdoor shopping mall at John Young and Osceola Parkways on the Orange/Osceola County line. It features stores such as American Eagle, Kohls, and Best Buy. There is also a multi-plex theater.

Kissimmee is near Orlando, home to , Universal Studios and SeaWorld, allowing tourists to access the parks through the city.

The following Osceola County public schools are located in Kissimmee: