The station is just south and east of the Miami River and Miami International Airport (MIA), respectively, and adjacent to the Airport Expressway (SR 112) on North Douglas Road (West 37th Avenue). When completed, it will serve Amtrak, Tri-Rail, Metrorail, and Metrobus, and will provide a people mover connection to the airport via the MIA Mover.

Phase I of the station, which involves the construction of the MIA Mover, Metrobus terminal, and Metrorail concourse, is scheduled to open in April 2012. Phase II, which entails construction of the Tri-Rail and Amtrak concourse, is scheduled for completion and opening in mid 2013.[1] The intermodal rail station, a part of the greater Miami Intermodal Center at MIA, is expected to be among the busiest passenger stations in Florida and the Southeast upon completion. 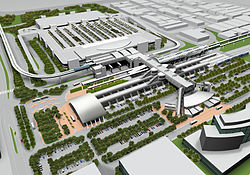 Rendering of the Miami Central Station, expected to be completed in 2013

Intercity passenger rail service service into Miami began in April 1896 with the arrival of the Florida East Coast Railway (FEC) at the new southern terminus in downtown, just east of the current site of Government Center station. Service between New York operated in conjunction with both the Atlantic Coast Line Railroad and the Seaboard Air Line Railway from Jacksonville. In January 1927, the Seaboard Air Line Railway commenced service on its newly completed extension to Miami, with the Orange Blossom Special arriving at Seaboard's terminal in Allapattah two miles north of downtown.[6][7]

Passenger service on the FEC was halted by a strike in January 1963, and the FEC downtown station was demolished that November. Seaboard, however, continued providing passenger service to its terminal via the streamlined Silver Meteor and other trains. Amtrak took over Seaboard's passenger routes in 1971, continuing to provide service to the Seaboard terminal.

In 1977, Amtrak determined it could not maintain the decaying Allapattah terminal, which also posed logistical problems for passenger coach maintenance, and moved the Miami terminus to its current location at the Seaboard passenger coach yards near Hialeah.[8] The new Miami Central Station is located six miles south of the current Amtrak station, on a mile-long spur that branches south off of the beginning of the Seaboard (now CSX) Homestead extension near the Miami River.

Construction of the facility began on May 18, 2011, but the ceremonial groundbreaking did not take place until September 27.[9]

Southbound Tri-Rail service terminated at the modern-day Hialeah Market in 1987. The current station opened in April 1998 at the present site of Central Station. It is currently the southern terminus of the Tri-Rail system.

On September 12, 2011, Tri-Rail service to the site was suspended for approximately two years to facilitate construction of the new station, with Hialeah Market becoming the temporary southern terminus for Tri-Rail. Shuttle buses will take passengers from the Hialeah Market station to the Miami airport, with two trains per day stopping further North at the Metrorail transfer station (with accompanying shuttles) instead. [10]

NOTE: As of Sept. 2011, this station is closed to finish construction of the Intermodal Complex.