CocoWalk is an upscale lifestyle center in the Coconut Grove neighborhood of Miami, Florida. The center houses over thirty stores and services, including a movie theater, shops, and multiple restaurants. Subsequently renamed The Gallery at CocoWalk by its former owners, Thor Equities, the mall is currently owned by PMAT Real Estate Investments, L. L. C.

When CocoWalk opened in November, 1990, AMC Cocowalk 16 Theaters was the center's first and only anchor. Phase II of the center was completed in 1994, adding eight more screens and totaling the cinema's composition to sixteen. In 2002, Phase III was completed, a four story office building. The entire first and most of the second floor allowed for the expansion of Gap. Recently, the movie theater has undergone renovations, and reopened as Paragon Grove 13, branded under Muvico Theaters, on June 4, 2010. 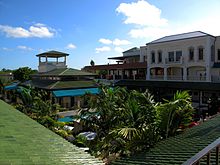