The Metromover serves primarily as a fast and easy way to travel within the greater Downtown Miami neighborhoods. The system is composed of three loops and 21 stations. The stations are located approximately two blocks away from each other, and connect near all major buildings and places in Downtown. Today, the Metromover serves as a vital part of Downtown life, and with the rapid population growth in Downtown, has grown quickly in usage and popularity. It has nearly doubled in ridership in the last decade, growing from 14,952 passengers per day in 1999 to 30,700 in 2011. 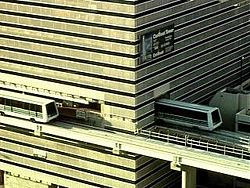 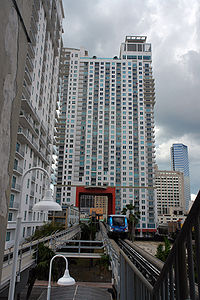 One of the newest Metromover cars leaving from First Street station

In 1987, the then just one year old people mover system set a record in daily ridership of 33,053 on a Saturday attributed to the new Bayside Marketplace.[3] That same year was when the planning began to extend the system to Brickell and Omni,[4] which would not be completed until 1994. Until November 2002 when the half-penny transit tax was approved, the Metromover used to have a fare of 25 cents. The fare was lifted because it was realized that the cost of collecting the fare nearly exceeded the revenue generated from the fare, as well as the fact that more Metromover ridership led to more Metrorail ridership.[5] After becoming free, from 2002 to 2005, along with a large increase in population and rising gas prices, Metromover ridership doubled from 4.7 million in 2002 to about 9 million in 2005.[6] In early 2011, Metromover has seen an increase in ridership at the same time as there has been a decrease in Metrorail and Metrobus ridership and a decrease in employment.[7] However, from January 2010 to January 2011, Metrorail saw a 7% increase in ridership, and both Metrorail and Metromover are expected to see additional ridership increases throughout 2011 due to rising fuel prices.[8] In May 2011, it was announced that a possible study was proposed to analyze the idea of extending the Metromover to the Port of Miami. This, with Metrorail and the new MIA Mover would create a direct rail transit link from the airport to the seaport. However, the study, which would take at least a year and cost about $120,000, was only a proposal to be voted on and the idea hasn't been reported on since.[9]

Running clockwise, the Downtown (Inner) Loop serves all Downtown stations except Third Street station. The Outer Loop (Brickell and Omni Loops) runs counterclockwise and share tracks around the downtown area, serving all stations except for Miami Avenue Station. The Brickell loop runs a line into the Brickell area to the south of downtown, while the Omni Loop contains a line with stations in the Omni neighborhood north of Downtown. This unusual pattern, a circular central loop where the trains running counterclockwise are those running from and back to destinations outside the loop, whereas trains in the opposite clockwise direction are only running a tight inner circular route, is also followed by the New York JFK Airport AirTrain system.

The Metromover car maintenance base is unusually right downtown, at SW 1st Ave and SW 1st St, which lies between Government Center and 3rd St stations on the outer counterclockwise loop, at the point where the two loops split to run in adjacent parallel streets.

All loops run from 5 a.m. to just after midnight, seven days a week. This schedule is adjusted during events. Trains arrive every 90 seconds during rush hours and every three minutes otherwise.

As part of the new, proposed Resorts World Miami megaproject in Miami's Omni neighborhood, announced in mid-2011, a Metromover expansion from Downtown Miami to South Beach is being pushed. The line could potentially run from the Omni across the Venetian Causeway to 17th Street in South Beach ending at the Miami Beach Convention Center. The line could have three stations in South Beach along 17th Street- Alton Road, Meridian Avenue and Washington Avenue. This would would connect Miami Beach to rail mass transit for the first time, and provide a direct rail connection into one of Miami's most visited neighborhoods. The line would also allow for future expansions later across South Beach.[10]

Metromover currently uses a fleet of 17 Adtranz C-100 vehicles, built by Adtranz predecessor AEG-Westinghouse in 1992, and 12 Bombardier Innovia APM 100 vehicles that were delivered during the summer and fall of 2008. These newer vehicles replaced the first 12 C-100 cars which were built by Westinghouse Electric in 1984, and include a more aerodynamic design, as well as an onboard CCTV system.[12]

Deliveries of an additional 17 cars from Bombardier Transportation began in July 2010. 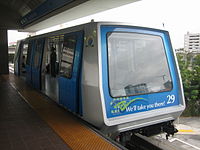