Park West (colloquially referred to as the Downtown Nightclub District) is a neighborhood of greater Downtown, Miami, Florida, United States. It is roughly bound by Biscayne Boulevard to the east, West First Avenue to the west, North 10th Street to the south and Interstate 395 to the north.[2] As of 2010, about 4,655 residents live in Park West. The neighborhoods is named 'Park West' due to its location just west of Bicentennial Park.[3] 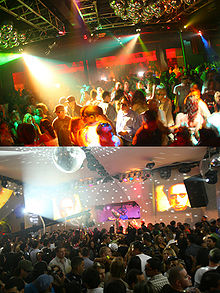 Park West is home to many large nightclubs

In recent years, the Park West neighborhood has become a popular film production center, with the filming of the 2012 Rock of Ages film that reconverted much of NE 14th Street into Los Angeles' Sunset Strip.[4] Television show Burn Notice, filmed almost primarily in Miami's Coconut Grove neighborhood, also often films in Park West studios. In 2010, plans to build a production studio at 29 NW 13th Street were announced. The studios are expected to add a series of sound stages to Park West, and help expand the growing film production industry in the Park West area.[5][6] In July 2011, production plans were announced for the Charlie's Angels 2011 TV show remake to be filmed in production studios in nearby Wynwood.[7][8]

Park West is served by Miami-Dade Transit via Metrobus along major thoroughfares, and by the Miami Metrorail and Metromover at: