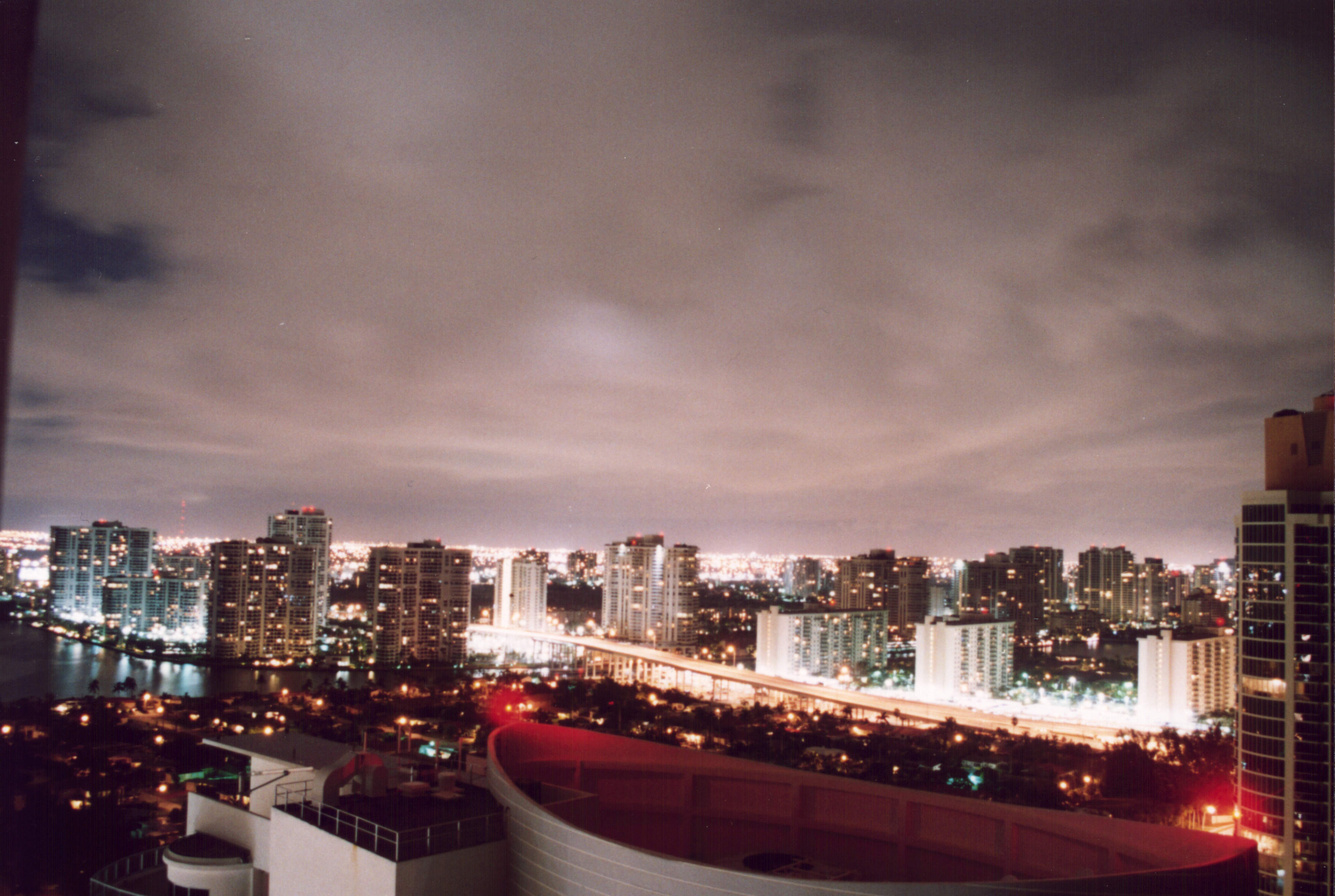 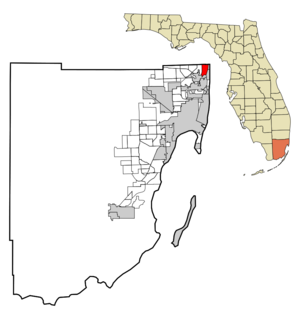 Aventura is a planned located in northeastern . The city name is from the Spanish word for "," and was named "Aventura" because that was the name of the original group of s in the area. The name predates the well known mall () built near the condominium developments. According to the U.S. Census estimates of 2007, the city had a population of 29,475.

Most of what would later become the City of Aventura was initially developed during the late 1970s and into the 80s as a high-rise residential area by , when the area was still mostly known as "Biscayne Gardens".

Aventura is also home to the , a high-end regional mall which was developed by Ray Parello, , and Eddie Lewis of and is currently owned by and . The enormous success of the mall encouraged explosive growth in the area and saw the closure of stores at the competing , which only recently has been revitalized. On , , the City of Aventura was incorporated.

] ] The city does experience cold fronts from November through March, however most of the year is warm and humid, and the summers are reminiscent of a true tropical climate. In addition, the city sees most of its rain in the summer (wet season) and is mainly dry in winter (dry season). The wet season, which is hot and humid, lasts from May to September, when it gives way to the dry season, which features mild temperatures with some invasions of colder air, which is when the little winter rainfall occurs-with the passing of a front. The hurricane season largely coincides with the wet season.

In addition to its sea-level , coastal location and position just above the , the area owes its warm, humid climate to the , which moderates climate year-round. A typical summer day does not see temperatures below 75°F (21°C). Temperatures in the high 80s to low 90s (30-35 °C) accompanied by high humidity are often relieved by afternoon or a that develops off the Atlantic Ocean, which then allow lower temperatures, although conditions still remain very muggy. During winter, humidity is significantly lower, allowing for cooler weather to develop. Average minimum temperatures during that time are around 59°F (15°C), rarely dipping below 40°F (4°C), and the equivalent maxima usually range between 65 and 75 °F (18-24 °C).

Aventura receives abundant rainfall. Most of this rainfall occurs from mid-May through early October. It receives annual rainfall of 58.6 inches (146.5 cm). [ [http://www.srh.noaa.gov/mfl/localdata.php NWS Miami Normals and Records Page ] ] The , which includes the cities of Miami, Fort Lauderdale, and West Palm Beach, is the second largest metropolitan area in the world after that receives regular cyclonic activityFact|date=February 2007. officially runs from through , although hurricanes can develop beyond those dates. The most likely time for Aventura to be hit is during the peak of the Cape Verde season which is mid August through the end of September. [ [http://www.weather.com/newscenter/specialreports/hurricanes/vulnerablecities/miami.html Weather.com Vulnerable cities: Miami, Florida] , retrieved ]

There were 14,000 households out of which 11.3% had children under the age of 18 living with them, 39.6% were married couples living together, 6.2% had a female householder with no husband present, and 52.2% were non-families. 45.3% of all households were made up of individuals and 23.2% had someone living alone who was 65 years of age or older. The average household size was 1.79 and the average family size was 2.45.

Aventura is known for its substantial Jewish population [Major Jewish American Communities] , many of whom come from the Northeast (, , etc.) Besides , Aventura also has experienced a significant influx of (especially Argentine Jews, , and Venezuelan Jews,) Brazilian Jews, , , , (including ) and also residing in the city.

The Aventura Express shuttle bus is a city run public bus service, free to Aventura residents. The , and Broward County transit bus systems also run through the city. The and Metromover does not, however, serve the city.

The main north-south road in the city is Biscayne Bouelevard and the main east-west route is the William H. Lehman Causeway. Although no interstates run through the city, I-95 is just 5 minutes away.

Aventura is between south Florida's two main airports, the and the , both 15 minutes away.

Aventura has a manager-commission form of city government. The City Commission is the city's , while the is the city executive.

The City Commission also hires the the City Attorney, City Clerk, and City Manager, who then hire all subordinate employees. The city manager oversees the day-to-day operations of the city government, administers the city's service providers, prepares long-range plans, and implements the policies established by the City Commission. Eric M. Sorta is the current City Manager, while Teresa M. Soroka is the current City Clerk.

Aventura is served by the for local radio and Television. Aventura has its own newspaper, Aventura News which is published weekly and is part of , " The Voice of the Community". The town has a magazine named "Aventura" and is served by "", "", and the "". There is also an online magazine called AventuraUSA.com that is dedicated to the South Florida social scene.

Perhaps one of the most famous attractions is the , a 2.4 million square foot indoor shopping center located in the center of the city. The city also has its own exclusive park, Founders Park, and an outdoor mall named the Shops at Waterways. Although not inside the city limits, some of south Florida's finest beaches are just a few minutes away from Aventura, across the William H. Lehman Causeway.

Aventura is served by the system.

The is the only public school located within the City of Aventura. It is a K-8 charter school that is sponsored by the city. It is an award winning school despite the fact that it was built and opened in 2003. The school was ranked in the top 10 of all schools in Florida in 2006. Children who live in Aventura are given admission preference during the admission lottery held every year. The school has an enrollment cap of 100 students per grade so that the school will never be overcrowded

All of Aventura is zoned to (Unincorporated Miami-Dade County).

The Northeast Branch of the serves Aventura; as of 2006, the branch is closed due to hurricane damage. [ [http://www.mdpls.org/info/locations/ne.asp Miami-Dade Public Library System - Northeast Branch ] ]