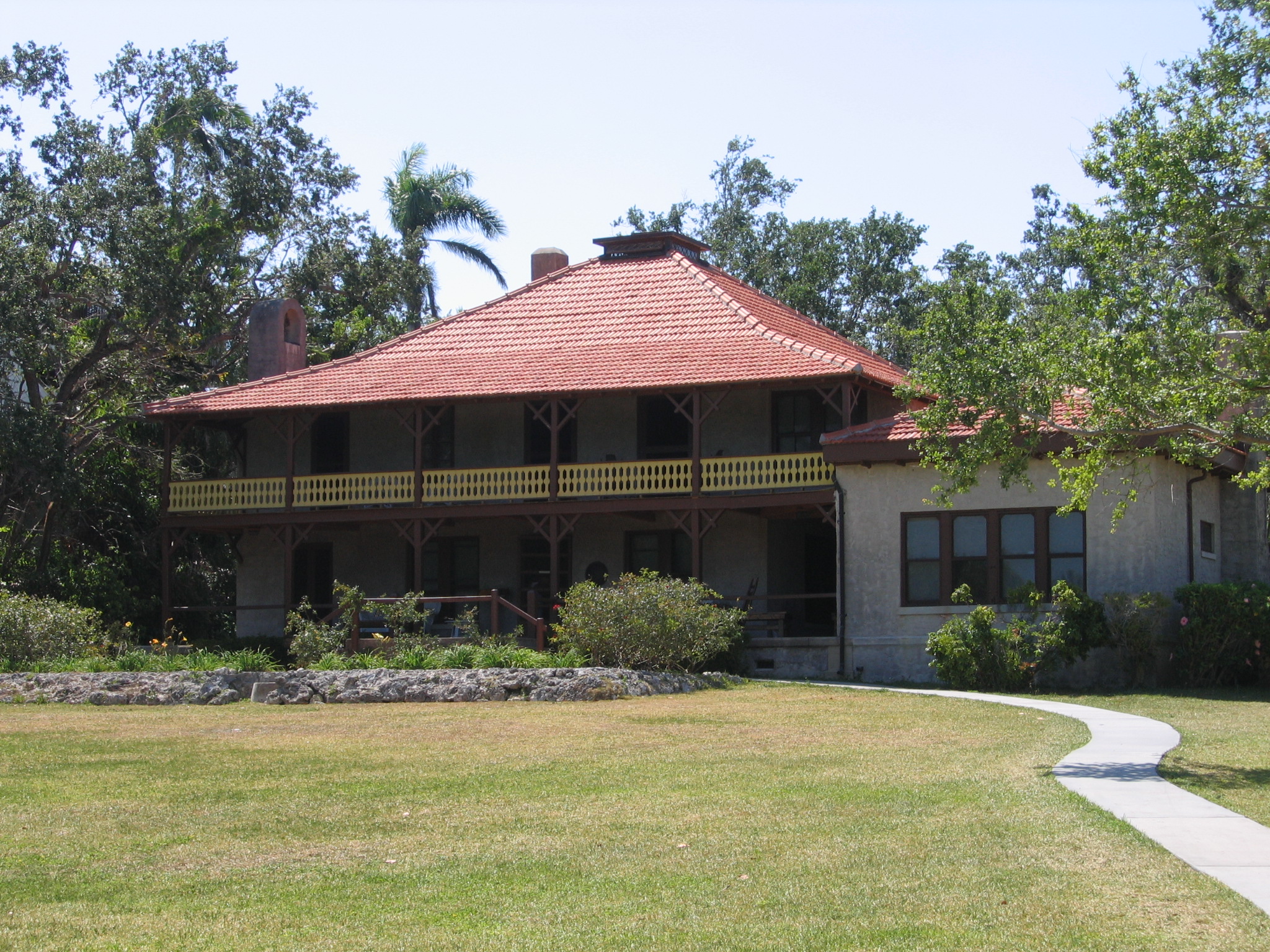 The Barnacle Historic State Park is a five acre Florida State Park located on , at 3485 Main Highway, Coconut Grove neighborhood of , . Built in 1891, it is the oldest house in its original location in . The Barnacle was the home of , one of Coconut Grove’s founders, as well as founder and Commodore of the Biscayne Bay Yacht Club. He was also a leading designer of sailing s. The Florida Park Service acquired the remaining five acres of Munroe's original 40 acre homesite from his descendants in 1973.

Ralph Middleton Munroe first visited South Florida in 1877 while on vacation from . On his second trip he brought his wife who suffered from . Unfortunately, the cure failed and she died. Her body is buried in Coconut Grove. He returned several times to the area and in 1887 decided to settle in the Bay.

Ralph Munroe purchased 40 acres of bayfront land in 1886 for $400 in addition to one of his sailboats, the "Kingfish", valued at an additional $400. His boathouse was built in 1887 and he lived on its upper floor until his main house was completed in 1891. The house, a one-story structure, was raised off the ground on wood pilings. Its central room is octagonal in shape and Munroe called his home "The Barnacle," presumably because it resembled one. It remained a bungalow until 1908 when more space was needed for his growing family. The whole structure was lifted and a new first story inserted below. In 1912 a library was built adjacent to the house. The Barnacle survived the disastrous 1926 hurricane and Hurricane Andrew in 1992 with only minimal damage.

Ralph Munroe's principal passion in life was designing yachts. Boats were the major form of transportation in the early days of Coconut Grove and yachting was a popular sport. Many South Floridians commissioned Munroe to design their yachts. In 1887, a group of residents formed the Biscayne Bay Yacht Club, electing Munroe as Commodore, a title that he held for 22 years. In his lifetime, he drew plans for 56 different yachts. "Micco", one of the last of Munroe's boats, was displayed at the park until Hurricane Andrew reduced the 101-year-old vessel to fragments. "Egret", a replica of Munroe's convert|28|ft|m|sing=on modified sharpie is now moored offshore.

As a seaman, civic activist, naturalist, and photographer, Commodore Munroe was a man who cherished the natural world around him. A walk into the park passes through a tropical hardwood hammock. It is representative of the original landscape within the city of Miami. Today, it is one of the last remnants of the once vast Miami Hammock.

In the spring of 1887 organized a regatta on Biscayne Bay with fifteen boats divided into three classes. "The winners were "Ada" (Captain Brickell), "Maggie" (Captain Carney) and "Edna" (Captain Addison), while Alfred Munroe and Charles Peacock were timekeepers and judges. After the race all hands, about fifty in number, participated in a good dinner at Peacock's (the Peacock Inn), given by the promoters. Thus began organized aquatic sports on the Bay, the Washington's Birthday Regatta afterwards being a fixture of the Biscayne Bay Yacht Club, until the displacement of sails by gasoline in general interest caused it to degenerate into a "Chowder-party". ["", Ralph Middleton Munroe and Vincent Gilpin, page 166-167]

Saturday, February 21, 2009 is the next Washington's Birthday Regatta on beautiful Biscayne Bay. The race is open to vessels of traditional design regardless of construction: mud hens, sea pearls, bullseyes, sharpies, Bahama dinghies, cat boats, gaff-rigs, eyc. Fiberglass boats are permitted. The Barnacle's convert|28|ft|m|sing=on sharpie "Egret", a replica of Ralph Munroe's "Egret" will be among those racing. The race takes place on the Bay just off the shore of The Barnacle and is sponsored by The Barnacle Society (a citizen's support organization) and The Barnacle Historic State Park. The race starts at noon followed by a post race party.

Timeline: Early History of the Site

* Before 1846: Largely unused, like most of South Florida, until the forced Seminoles into this area. Spanish expeditions may have explored the bay on mapping expeditions, but any inland explorations are purely speculative.
* 1846: Land first surveyed.
* 1868, November 14: Edmund Beasley files claim for site under the Homestead Act. May have dug well on site. Built a small house later called the Three Sisters Cottage about this time.
* 1870: Beasley dies, leaves site to his wife, Anna.
* 1872: Site rented to Dr. Horace Porter.
* 1873, January 6: Porter establishes a post office, which he calls Cocoanut Grove.
* 1873, July: Porter unsuccessfully attempts to claim site under the Homestead Act, claiming that it had been abandoned by the Beasleys.
* 1875, May 20: Mrs. Beasley gains clear title to the site.
* 1877: Mrs. Beasley sells site to John W. Frow, lighthouse keeper at Cape Florida, for $100.00.
* 1886: Ralph Munroe purchases 40 acres for $400.00 plus the boat "Kingfish" which he values at $400.00.
* 1887: First Washington's Birthday Regatta held.

Timeline: History of the Barnacle

Daytime activities include touring the historic site, picnicking, and wildlife viewing. Concerts and other events are held frequently throughout the year.

The park is across the street from Senor Frog's restaurant. The entrance is within sight of the Coconut Grove Playhouse. There is no parking available in the park itself, except for those with disabilities. However there a public parking lot next to the playhouse and street parking throughout the neighborhood.

Take I-95 South to the end, which becomes US 1. Continue South and Turn left at SW 27th Avenue. Continue to the end turn right on Bayshore Drive. As Bayshore Drive Bends right, it becomes MacFarlane Road. Move onto left lane and take a hard left at the traffic light on Main Highway. The park is on the left shortly after the intersection of Commodore Plaza Street.

Take US 1 North to Bird Road/SW 40th Street. Turn right at McDonald Road and continue to the end which has a traffic light. Turn left on Grand Avenue, making an immediate right on Commodore Plaza Street. Continue to the end and turn right on Main Highway. The park is on the left. There is no parking available in the park itself, except for those with disabilities.