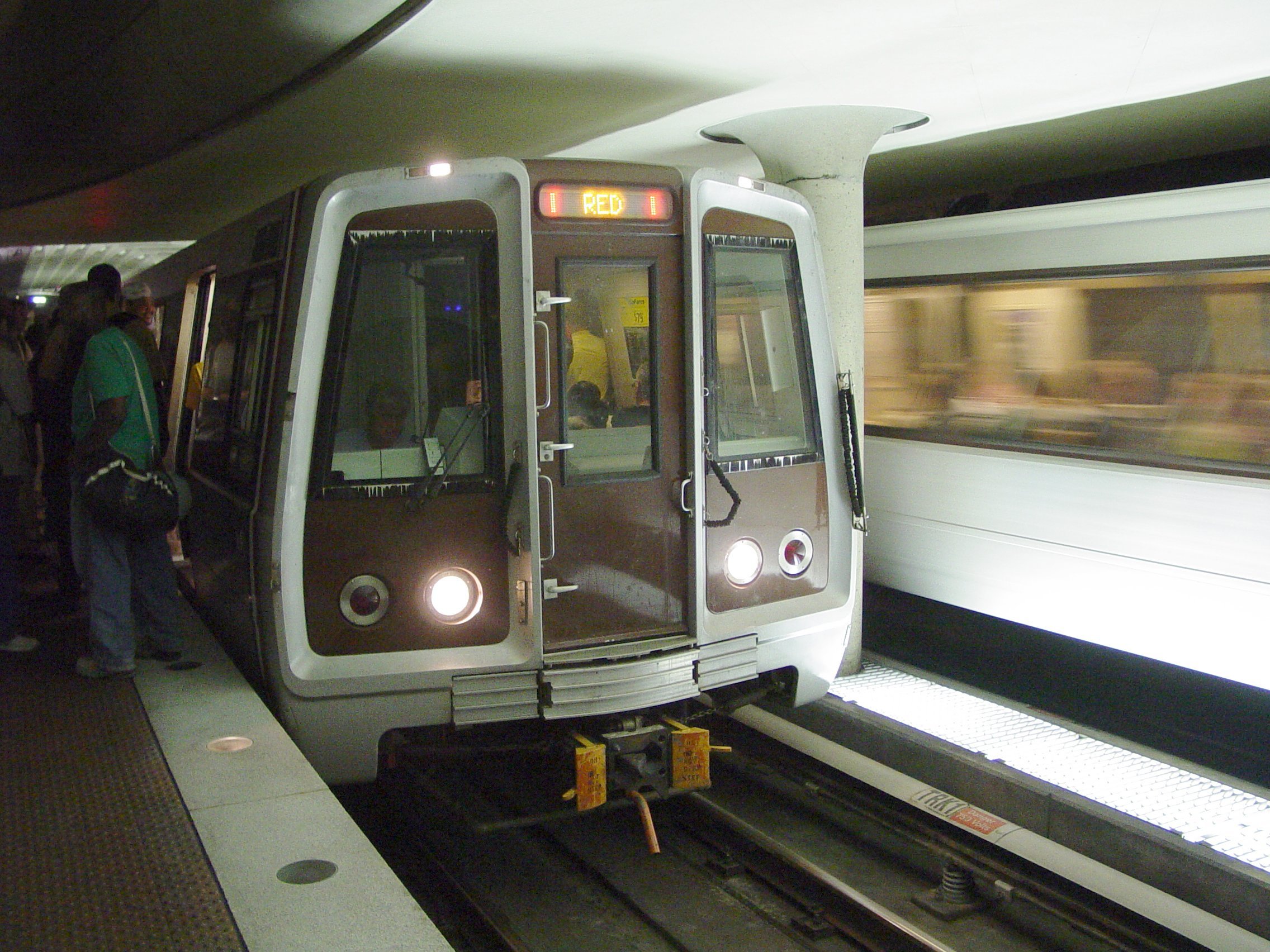 The Red Line of the is a rail service operating between 27 stations in Montgomery County, and the . It is a primary line through downtown Washington, and the oldest and busiest line in the system. It forms a long, narrow "" capped by its terminal stations at Shady Grove and Glenmont.

It is the only line which does not share its track with any other line, except from , to , , when the Green Line Commuter Shortcut used Red Line tracks from Brookland–CUA to Farragut North. Unique among the lines Washington Metro, some peak service Red Line trains operate on an abbreviated route, between Grosvenor-Strathmore and Silver Spring. On , WMATA, Montgomery County, and the state of announced an agreement to end the off-peak terminations at Grosvenor, having those trains operate instead between Shady Grove and Silver Spring.

This route begins at Metro Center (12th and G Streets, Northwest) and extends westward in subway under G Street, thence northwestward under Lafayette Park and Farragut Square, continuing under Connecticut Avenue to Yuma Street. From this point, the route proceeds westward in subway under Yuma Street to Tenley Circle, thence northward under Wisconsin Avenue to the District of Columbia–Maryland boundary. The route continues northward under Wisconsin Avenue, through Bethesda, to a point south of the Capital Beltway. The route crosses over the Capital Beltway along the east side of Rockville Pike, thence northward in subway along Rockville Pike to a point south of Randolph Road, thence proceeds under private property in subway to the Baltimore and Ohio Railroad. The route continues northwestward on the surface along the B&O Railroad to a terminal in Rockville at Shady Grove. The following stations were included (current names indicated in parentheses): Metro Center, Farragut North, Dupont Circle, Zoological Park (Woodley Park-Zoo/Adams Morgan), Cleveland Park, Van Ness(-UDC), Tenley Circle (Tenleytown-AU), Friendship Heights, Bethesda, Medical Center, Parkside (Grosvenor-Strathmore), Nicholson Lane (White Flint), Halpine Road (Twinbrook), Rockville, and Shady Grove. Storage tracks and inspection facilities are located just north of the Shady Grove terminal. A future extension is planned extending northward to Germantown, with alignment to be determined.

This route begins at Metro Center and extends eastward in subway under G Street to 6th Street, thence southeastward under Judiciary Square, eastward under D Street, and northward under Union Station. The route then proceeds northward on the surface along the B&O Railroad to the District of Columbia–Maryland boundary. The route continues northward through Silver Spring along the B&O Railroad, thence in subway under 16th Street and Georgia Avenue to a terminal at Glenmont. The following stations are included: Gallery Place, Judiciary Square, Union Station, Rhode Island, Michigan Avenue, Fort Totten, Takoma Park, Silver Spring, Forest Glen, Wheaton, and Glenmont. The main maintenance yard is located south of the Rhode Island Station. Storage and inspection facilities are located north of the Glenmont Station.Funding for the extension to Shady Grove was conditionally approved in July 1975. [, Rockville and Greenbelt Lines Are Funded by U.S. for Metro, , ]

Service on the Red Line (and the Metro as a whole) began on , , with operations between Farragut North and Rhode Island Ave. Gallery Place's opening was delayed due to a court order regarding lack of handicapped access, but it opened in the middle of the line on , .

The western end of the line was extended one station to Dupont Circle on , , three stations to Van Ness–UDC on , , five stations to Grosvenor-Strathmore on , , and four stations to Shady Grove on , .

The eastern end was extended four stations to Silver Spring on , – which added to the system for the first time – two stations to Wheaton on , , and one station to Glenmont on , , completing the line.

The New York Ave–Florida Ave–Gallaudet U station, located between Union Station and Rhode Island Ave–Brentwood, opened on , . It was the system's first in-fill station (a new station between existing stations).

Below is a chronological list of dates on which specific portions of the Red Line opened for service. [PDFlink| [http://wmata.com/about/metrofacts.pdf WMATA Facts] ]

The Red Line begins above ground at Shady Grove, and parallels 's (served by MARC trains) to south of Twinbrook. There it enters a tunnel and curves west to at White Flint. Until Tenleytown, the Red Line is over, under, or next to Rockville Pike and Wisconsin Avenue. The tunnel curves east at Tenleytown into Yuma Street to reach Van Ness, curving back south there under Connecticut Avenue to beyond Farragut North. A curve under Lafayette Park takes the tunnel east under G Street NW through Metro Center to Gallery Pl–Chinatown.

From Gallery Pl–Chinatown through Judiciary Square, the line runs southeast, turning east again at D Street to reach Union Station. There it turns north and surfaces adjacent to Union Station's platforms, follows the Washington Terminal yard tracks north to Brentwood where the line turns northwestward and again joins 's tracks, running in a unique gauntlet arrangement with the freight railroad tracks straddling the Metro tracks. The line runs in this manner northwest across the District-Maryland line, through and past Silver Spring. It reenters a tunnel at 16th Street West and heads north under to the end at Glenmont.