MARC (Maryland Area Regional Commuter[2]), known prior to 1984 as Maryland Rail Commuter Service, is a regional rail system comprising three lines in the Baltimore-Washington Metropolitan Area. MARC is administered by the Maryland Transit Administration (MTA), a Maryland Department of Transportation agency, and is operated under contract by CSX Transportation[3] and Amtrak. MARC does not operate on weekends. Service is suspended or reduced on select holidays. With some equipment capable of reaching speeds of 125 mph, MARC is considered the fastest commuter railroad in the United States.[4]

The Brunswick Line is the longest line, from Washington, D.C. to Martinsburg, West Virginia over the CSX Metropolitan, Old Main Line, and Cumberland Subdivisions, all of which were former Baltimore and Ohio Railroad (B&O) lines.

The Camden Line runs between Washington, D.C. and Baltimore, Maryland Camden Station over the CSX Capital Subdivision. The B&O began service along this route in 1835, making it the oldest passenger rail line in the U.S. still in operation.[5]

The Penn Line runs between Washington, D.C. and Perryville, Maryland on Amtrak's Northeast Corridor and is the fastest commuter rail line in North America, with trains of bi-level cars and electric locomotives operating at up to 125 mph.[4] It was previously used by the Pennsylvania Railroad (hence the name) and is the busiest line, carrying more passengers than the other two lines combined. All day on weekends and before 6am and after 10pm on weekdays most Amtrak Regional trains accept MARC monthly and weekly tickets at Amtrak/MARC stations, and some Amtrak trains carry MARC ticket holders boarding at Aberdeen during the week.

The local rail passenger service now called MARC Train Service has actually operated since the 1830s on what is now known as the Camden Line, and since the mid-to-late 19th century on the Penn and Brunswick Lines. The service now operated by CSX was formerly the B&O local train service (Camden and Brunswick lines). The Penn Line service was the local train service of the Pennsylvania Railroad, and later, Penn Central, followed by Conrail.

The passenger trains eventually became unprofitable, and in 1974, the B&O Railroad approached the State of Maryland with an intention of discontinuing the service unless a subsidy could be provided. The Maryland Department of Transportation (MDOT) agreed to provide a partial subsidy of the deficit in 1974, and in 1975 this evolved into an operating agreement with the B&O, where Maryland agreed to pay the total operating deficit for the trains and provide the rolling stock.

In 1976 MDOT entered into a similar agreement with Conrail, which had ended up with responsibility for local passenger train operations in the Northeast Corridor after the bankruptcy of Penn Central and other Northeast railroads. In that same year, the State Railroad Administration was established by Executive Order of the Governor, to oversee these railroad contracts, to procure the needed rolling stock, to apply for and manage federal funding for the commuter rail service, and to administer a state funded subsidy program for shortline freight rail operations, primarily on the Eastern Shore and in Western Maryland.

In 1982, Congress relieved Conrail of the responsibility to operate local passenger rail service, and in 1983, the State entered into an operating agreement with Amtrak to continue this service (now referred to as the Penn Line). The same year Maryland, along with a number of other Northeastern states, took control of its commuter railroads and the "MARC" (Maryland Area Rail Commuter) service name was established. The State Railroad Administration conducted a marketing study, which resulted in the creation of the name and logo of MARC to use as a unifying tool for marketing the service where, at that time, train crews wore either B&O or Amtrak uniforms, and some of the rail cars in use were leased from New Jersey Transit. So, while the name MARC was established in 1983, the service dates back well over 100 years. In 1992, the former State Railroad Administration was merged with the Mass Transit Administration. The Mass Transit Administration was later renamed to Maryland Transit Administration which now oversees the operation of MARC Train Service.[7]

Beginning as early as June 2010, MARC began looking for a new operator to replace CSX Transportation for the Camden and Brunswick lines.[8]

Controversy first arose when the French-owned and Montgomery County, Maryland-based Keolis (already operating Virginia Railway Express trains) was the only bidder for the contract. Bidding was stopped in the fall of 2010 due to lack of competition. When bidding was reopened in 2011, at the behest of Leo Bretholz and other Holocaust survivors, Maryland passed a law requiring Keolis's majority owner, SNCF, wholly owned by the French government,[9] to fully disclose its role in transporting of Jews to concentration camps during World War II, while SNCF was under control of the Nazi government. This disclosure is required to be done to the satisfaction of the Maryland state archivist before Keolis would be allowed to place a bid for MARC service.

Keolis and SNCF lawyers claim that the all documentation required by the law had been produced long before.[10] This was also asserted by Don Phillips in the July 2011 issue of Trains Magazine. Phillips states that a full 914 page independent report and complete history of SNCF's role in the Holocaust, released in 1996, is currently being translated into English.[11] Phillips cites from the publicly available English introduction to the report, noting that while some SNCF workers worked with the Nazis, acts of sabotage were frequent, and the Nazis shot 819 SNCF workers for refusing to carry out the rail orders of the government. An additional 1200 railway workers were themselves sent to concentration camps over SNCF rails. Phillips also notes that SNCF does business with the Israeli rail system and works without government prompting to educate the current generation about the war and Holocaust.

As of June, 2011, a year after MARC started looking for a replacement to CSX, the future of Keolis's ability to bid on the MARC contract remains up in the air with the new disclosure law in place. No other bidder has been found to replace CSX. On June 5th, 2011, the Washington Post ran an editorial critical of the disclosure law. The Post claims that SNCF has been working for years on digitizing its records, and the Maryland law may require items or formats counter to SNCF's current system and/or French law. The Post also reports some in the Maryland's Attorney General's Office office worry the law is not Constitutional, may risk retaliation towards Maryland firms overseas, and may risk federal funding for Maryland "by imposing arbitrary procurement demands on a single company."[12]

As the Penn Line is the only electrified line, the AEM-7 and HHP-8 are restricted to that line.

The majority of the Kawasaki cars are operated on the Penn Line, and the Pullman cars are only operated on Brunswick Line trains to Brunswick or Martinsburg due to their restriction to use at low-level platforms only. All trains are operated with a cab car from which the engineer can control the train. The cab car is typically at the head of trains traveling toward Washington and the locomotive is at the head of trains heading away from Washington. In the early first decade of the 21st century a single unpowered EMD F cab unit, #7100 (ex-Baltimore & Ohio Railroad F7 #4553), occasionally substituted for a cab car. In addition to serving as a Non-Powered Control Unit , the unit is also outfitted with a head-end power generator to supply electricity to the train.

In 2011 MARC ordered 54 new bi-levels from Bombardier to increase capacity. The cars were purchased using an un-exercised option from NJ Transit. The MARC order consists of 34 trailers and 15 cab cars. The cars will replace the MARC IIA single level cars and gallery cars, resulting in a net increase of 16 cars. Delivery is scheduled to begin in 2013.[16] 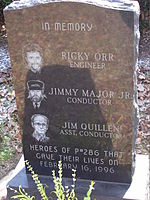 MARC Memorial in the grounds of the Brunswick train station.

On February 16, 1996, during the Friday evening rush hour, an eastbound train headed to Washington Union Station collided with the westbound Amtrak Capitol Limited headed to Chicago via Pittsburgh. The collision occurred at Georgetown Junction on a snow-swept stretch of track just west of Silver Spring, Maryland. The crash left 11 people dead aboard the MARC train. Three died of injuries suffered in the impact, with the rest succumbed to the ensuing smoke and flames; the MARC engineer and two conductors were among the dead.

The NTSB report concluded that the MARC crew apparently forgot the restricting signal aspect of the Kensington color-position signal after making a flag stop at Kensington Station. The engineer of the Capitol Limited also apparently increased speed rather than braking in an attempt to make the crossover. The MARC train was operating in push mode with the cab control car out front. The Amtrak locomotives were in the crossover at the time of the collision; the MARC cab control car collided with the second Amtrak unit, an F40PH, rupturing its fuel tank and igniting the fire that caused most of the casualties. The lead unit was a GE Genesis P40DC, a newer unit that has a fuel tank that is shielded in the center of the frame, so a few seconds' difference might have prevented the fire. The official investigation also suggests that the accident might have been prevented if a human-factors analysis had been conducted when modifications to the track signaling system were made in 1985.

On February 7, 2008 a train derailed at Union Station after it was hit by an Amtrak switcher locomotive. The train was still unloading passengers at the time of impact, and seven people received minor head and neck injuries. The Amtrak locomotive was attempting to couple to the train and was reportedly moving too fast.[17]

On June 21, 2010, northbound Amtrak-operated Penn Line train 538 broke down at 6:23 p.m. Temperatures inside the train reached 100 degrees due to malfunctioning air conditioning. After passengers called 911, 10 people were treated at the scene for heat-related problems. All passengers were cleared from the scene by 9:40pm.[18] This incident prompted MDOT Secretary Beverley Swaim-Staley to apologize to customers aboard Penn Line train 538 on June 27, 2010. When the Amtrak engineer operating this train overran a scheduled stop in Odenton, Amtrak CEO Joseph H. Boardman apologized to riders the following morning. This set of incidents prompted Amtrak to draft an emergency response plan for broken down MARC trains.[19]

In the first decade of the 21st century ridership increased significantly, and the system neared capacity for its current configuration. With the area population growing and the BRAC process poised to bring new jobs to Aberdeen Proving Ground and Ft. Meade, both of which are served by nearby stations, the state saw the need to expand service to accommodate growth. In September 2007, MTA Maryland unveiled an ambitious 30-year plan of system improvements. Though funding sources had not been established at that time, the plan represented the state's goals of increasing capacity and flexibility. Proposed improvements included:[20]

While many of these proposals would require expensive capital improvement and years or decades to implement, the agency would like to put others into action as quickly as possible, suggesting that, for instance, Penn Line weekend service could have begun as early as 2008. However, budgetary issues have delayed any such expansions. In Spring 2009, to offset such budget shortfalls, ticket sales employees at non-Amtrak stations were replaced with Amtrak "Quick-Trak" touchscreen ticket machines, and some train services have been eliminated or scaled back. For example, Train 871, the 1:45pm train on the Brunswick line, now operates only on Fridays. Ticket machines were also added to stations that were not previously staffed, such as Halethorpe, Odenton, Camden and all multi-purpose stations are still staffed.