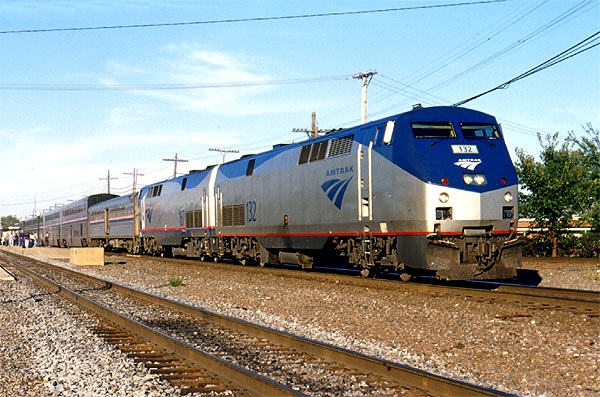 Prior to the formation of Amtrak, the "California Zephyr" (the "CZ", or "Silver Lady") was a passenger train operated jointly by the (CB&Q), (D&RGW) and (WP). The CB&Q, D&RGW and WP inaugurated "The most talked about train in America" on , . It was purposely scheduled so that the train passed through the most spectacular scenery in the daylight.

The original "CZ" ceased operations in 1970. However, the D&RGW continued to operate its own passenger train service, named the , between Salt Lake City and Denver using the original equipment until 1983.

Since 1983, the "California Zephyr" name has been applied to a Chicago-San Francisco Amtrak service, which operates daily and is a hybrid route between the route of the original CZ and the route of its former rival, the .__TOC__

Before Amtrak operated a train with this name, the "California Zephyr" was operated by the Chicago, Burlington and Quincy Railroad from Chicago to , the Denver and Rio Grande Western Railroad between Denver and , and the Western Pacific Railroad from Salt Lake City to Oakland, California. Trains ran with cars of mixed ownership; cars cycled in and out of the consists for service, repairs, and varying passenger loads with the seasons.

The first train was christened in San Francisco by while Lieutenant Governor , Mayor of San Francisco , and WP President looked on. For the inaugural run in 1949, every female passenger on the train was given a corsage of "silver" and orange orchids that were specially flown in from . The women who worked as car hostesses on this train were known as "Zephyrettes."

The forward section of the first Vista-Dome car was partitioned off and reserved for women and children only. There was a door in the corridor under the dome just behind the women's restroom that provided access to the reserved section. Early on however, this reserved section was opened up to all passengers and the door and partitions were removed. Like the train's operation, ownership of the cars was split between the three railroads almost evenly across all car types. Each car was owned by a single railroad, but the ownership of the cars on any specific day's run of the train depended more on what equipment was available at the terminals than whose railroad the train was operating over at the time.

Generally positioned as the second Vista Dome coach was the car referred to as the "Conductor's Car". This car was like the other Vista Dome coaches, except in the B end, was a small booth with a bench seat and desk for the Conductor's use.

In 1952 an additional Pullman sleeper (6 double bedrooms - 5 compartments) was added to regular service on this train. With the new cars delivered that year, cars arriving in Chicago on the "California Zephyr" were made available for use on the "" for an overnight round trip to . When the cars returned from Lincoln the next day, they were placed back in the westbound "California Zephyr's" consist for the next train out of Chicago that afternoon.

The "California Zephyr" was marketed (especially to families) as "...a vacation unto itself"." Train hostesses, while not new to the industry in the late 1940s, were nevertheless elevated to a new level on the "CZ" in the form of the "Zephyrette." The "Zephyrettes" functioned as social directors, tour guides, babysitters, nurses&mdash;in short, they filled just about any role required to ensure that the passengers had a memorable trip. A pool of approximately twelve women was assigned at any given time to the "CZ" in this capacity. In 1983 revived the "California Zephyr" and invited one of the original "Zephyrettes" to host the first trip.

A pair of the Western Pacific's s (RDCs), operating as replacements for the discontinued "Royal Gorge" (trains No. 1 and 2) [http://www.snowcrest.net/photobob/wprdc2.jpg] between , and , also picked up the nickname "Zephyrette."

As ridership fell during the 1960s, the Western Pacific repeatedly petitioned the ICC to drop its section of the train west of Salt Lake City without success. On , , the ICC released an order stating that "operation of the train [on the Western Pacific] was no longer required". The train's final operation was made on , , with a westbound train terminating at Oakland, California. The "California Zephyr" had operated for 21 years and 2 days. East of Salt Lake City, the train was reduced from a daily to a tri-weekly schedule, operating as "California Service" on the Burlington and as the "" on the Rio Grande. The Rio Grande portion of the train was extended beyond Salt Lake to , allowing Nevada and California passengers to connect to the 's passenger train. This arrangement existed until the creation of Amtrak on , .

With the establishment of Amtrak in 1971, the new system began operating its "San Francisco Zephyr" over the Chicago, Burlington and Quincy route to Denver, and Union Pacific's "Overland Route" through Wyoming instead of Colorado, then over the Southern Pacific tracks west of Ogden, Utah.

The Rio Grande railroad initially opted out of and continued to operate its section of the former "California Zephyr" as the "." In 1983 the Rio Grande Railroad reversed its decision and joined Amtrak.

Heading westward from Chicago, there are many small towns along the right-of-way as the train crosses the towards Denver.

The scenery changes dramatically at Denver as the train climbs the . After crossing the via the , the tracks follow the for several hours. Passengers can see the transition from a narrow, whitewater river (popular with rafters, who habitually moon the train as it passes) to a much wider stream past and Grand Junction. The train finally departs the now much larger Colorado River after exiting which is also where the train enters .

In Utah, the train follows the southern rim of the to their end near Helper. The train then crosses the , cresting at Soldier Summit. After passing the Wasatch the train arrives at the where most of the population of Utah is located.

Once the train reaches Salt Lake City the train loosely follows until the terminus of the train in California. Both the freeway and railroad pass along the south shore of the and across the towards Nevada.

The provides the path across most of Nevada. However, before the train reaches the Humbolt river, it crosses through 2 mountain ranges, tunneling under the . Like all rivers in the the Humboldt does not reach the ocean, but terminates in the desert. On the other side of this desert valley is the which provides the train's path to Reno and up the Sierra Nevada Mountains in California.

In California, the train crests the Sierra Nevada at and descends following a ridge between the American and s. Eventually, the California Zephyr reaches the lowland areas of the . The trip terminates in , a suburb of Oakland, where a free shuttle bus connects passengers to the (BART) system. Passengers continuing to San Francisco transfer from the train to a which will take passengers to downtown San Francisco.

The original California Zephyr used the as its path through the Sierra Nevadas. The rails are still in use for freight; however, anyone wishing to see this portion of the original route must now use State Route 70 which runs parallel to the old Western Pacific track.

Five museums currently hold equipment once used on the CZ. The owns several Burlington locomotives that were used to pull the train on occasion. The has two Rio Grande locomotives that also saw CZ and later "" service.

The largest collection of preserved equipment can be found in at the . One locomotive and four cars are currently preserved there as part of the museum's Zephyr Project restoration program. is the last intact locomotive built specifically for the CZ. The cars are dome-lounge "Silver Hostel", dome-coaches "Silver Lodge" and "Silver Rifle" (on long term loan from the ) and the "Silver Plate", which is the last intact dining car left from the train's fleet.

A non-functional replica of the California Zephyr is located at theme park in . The train serves as the location of Baker's Field Bakery and Bur-r-r Bank Ice Cream counter service cafes at the Sunshine Plaza main entrance area of the park.