Metro stopped issuing and accepting paper bus transfers as of January 4, 2009; bus and rail riders must use a SmarTrip card to receive the transfer discount.[5]

The current Metrobus fare structure is as follows:[6]

Discounts may be available for senior citizens, people with disabilities, and DC students.(*must have valid ID)

The interior of a WMATA (Metrobus) New Flyer D40LFR Suburban

All Metrobuses have SmarTrip card readers which automatically deduct the correct fare from a rider's SmarTrip card (including transfer credit). Formerly, Metrobus issued paper transfers which gave the rider free transfers to any regular bus for two hours. Beginning January 4, 2009, when a rider uses a SmarTrip card they will automatically receive rail-to-bus transfer credit, and bus-to-bus free transfer time for regular buses is increased to three hours. Express routes have different requirements. This section discusses the transfer policy to and from Metrobus and other regional bus operators. The routes can be Metrobus routes or routes of other regional operators. Note that as of January 4, 2009, transfer credit is issued on a SmarTrip card, riders using cash payment cannot obtain a paper transfer, and thus must pay full fare upon boarding the bus. On June 27, 2010, the transfer window was reduced from 3 hours to 2 hours.

WMATA is adding a total of 533 hybrid buses to replace its diesel bus fleet. Each new "New Flyer Xcelsior XDE40" bus costs $571,737 and is expected to break down less frequently as well as offer greater fuel economy. With the latest purchase of 152 hybrid buses for $89.3 million from New Flyer of America, WMATA's Metrobus fleet will consist of 600 diesel buses, 553 hybrid buses and 339 natural gas fueled buses.[8] 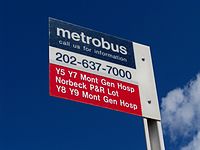 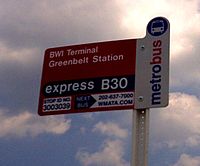 There are 9 divisions (a.k.a. garages, yards or lots) in the Metrobus system. Two of them are open on weekdays only.

NOTE: Routes bolded and in parentheses 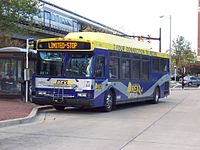 Richmond Highway Express a.k.a. "REX", is a Limited-Stop bus line that operates between King Street – Old Town station and Fort Belvoir along the Richmond Highway corridor in Fairfax County, Virginia. The current "REX" fleet consists of twelve 2006 Orion 07.501 (VII) CNG (2674–2685) buses painted in a blue-and-gold paint scheme, which operate out of the Four Mile Run division. REX began service on September 26, 2004, replacing parts of Route 9A (which now operates between Huntington station and The Pentagon). The original REX bus fleet consisted of twelve 2000 Orion 06.501 (VI) (2073–2084) buses wrapped (but not painted) in blue-and-gold paint scheme before the aforementioned newest Orion 07.501 CNG buses arrived in 2006.