Merpati Nusantara Airlines is a commuter airline based in Central Jakarta, Jakarta, Indonesia.[1][2] It is a major domestic airline operating scheduled services to more than 25 destinations in Indonesia, as well as scheduled international services to East Timor and Malaysia. Its main base is Soekarno-Hatta International Airport, Jakarta.[3] The word merpati is Indonesian for "dove", and Nusantara is a geographic term referring to parts of Indonesia. Merpati is listed as 2-star airlines by Skytrax.[4] Merpati also listed in category 1 by Indonesian Civil Aviation Authority for airline safety quality[5] and plans to get IATA Operational Safety Audit (IOSA) from International Air Transport Association. It has a maintenance facility based at Juanda International Airport, Surabaya.[citation needed]

Pertamina has fuel embargoed Merpati since October 15, 2011 inline with Merpati debt of a total Rp.550 billion ($62.15 million), including interest and fines.[6] At about 3 p.m. on October 16, 2011 Merpati flied normally after Merpati has promised to settle its fuel debt after state management assets firm PT Perusahaan Pengelola Aset (PT PPA) guaranteed its finances with a restructuring fund worth Rp.561 billion ($63.39 million), but there are no certain schedule of when the fund will be given.[7]

The airline was established and started operations on 6 September 1962. It was set up by the Indonesian government as the second state airline, with the main objective of taking over the network of domestic services developed by the Air Force since 1958. During 1962, it also took over the routes in West Irian (formerly Dutch New Guinea) previously operated by KLM subsidiary, De Kroonduif, which had been flown by Garuda since 1962.

With a start up capital of 10 million rupiah, Merpati began operations in Kalimantan, using a fleet of four de Havilland Otter/DHC-3s and two DC-3 Dakotas provided by the Indonesian Air Force (TNI AU). Pilots and technicians were supplied by the Indonesian Air Force, Garuda Indonesia Airways and other civil aviation companies. Its mission, defined by the government, was to become an 'air bridge' linking remote areas of Indonesia and thereby helping to build the economies of such regional areas. The air bridge theme is the basis of the current Merpati logo, displayed on the tails of its aircraft.

The first Managing Director appointed was Air Commodore Sutoyo Adiputro Henk (1962–1966) who had an initial staff of 17 people. In 1963, the airline expanded its routes to include Jakarta - Tanjung Karang (Bandar Lampung), Jakarta - Semarang, and Jakarta - Balikpapan. In 1964, the airline took over operations from NV de Kroonduif Garuda, increasing its aircraft fleet to 12. With the addition of three DC-3 Dakotas, two DHC-6 Twin Otters and 1 DHC-2 Beaver, Merpati began to grow, with operations now reaching Sumatra, Papua and Nusa Tenggara Barat. Further expansion saw the addition of more aircraft, including three Dornier DO-28s and six Pilatus Porter PC-6s, and staff numbers growing to 583 people.

In October 1978, the airline was taken over by Garuda, but continued to operate under its own name. Merpati was integrated into the Garuda Indonesia Group in September 1989, but was granted government permission to separate in 1993, although the split did not actually take place until April 1997. It is currently owned by the Indonesian Government (93.2%) and Garuda Indonesia (6.8%).

June 5, 2011: To fulfil its mission as the 'Bridge of the Archipelago', Merpati Nusantara Airlines was identified as needing 15 jet airliners, plus 40 aircraft with accommodation for 50 passengers and 20 others of 20-passenger capacity such as the MA-60, the NC-212 and the DHC-6 Twin Otter.[8]

In July 2011, the Government and Congress agreed to provide a capital injection worth Rp.516 billion ($60.7 million) to Merpati Nusantara Airlines in its 2012 budget.[9] 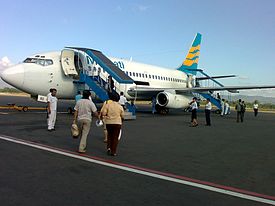 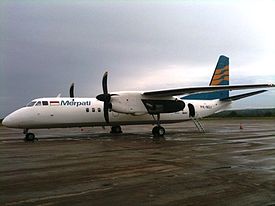 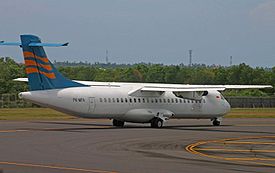 As of 2011, Merpati no longer operates the ATR 72-212 since the arrival of the MA60. Seen here is PK-MFA taxiing for departure at Ngurah Rai International Airport, Bali for Selaparang Airport, Lombok in early 2010

Merpati Training Centre is a division of Strategic Business Unit and is one of the largest aviation training centres in Indonesia. It conducts ground school courses for pilots, flight attendants, flight operation officers (dispatchers), commercial airline operations and administration staff in the region. The training centre was originally founded in 1994 and known as 'Flight Safety Training' training initially Merpati's own staff, but later changed its name to the Merpati Training Centre (MTC) in 1999 offering aviation training services to other airlines and companies in the region. Some of MTC's clients include Indonesia's national airline, Garuda Indonesia, Sriwijaya Air, Batavia Air, Lion Air, Pelita Air Service and many more.

On 16 February 2010, the Merpati Pilot School, a department of the MTC, was officially launched at Surabaya's Juanda International Airport. The flying school was awarded its Part 141 certification from the Directorate General of Civil Aviation on 18 August 2009 and currently has a fleet of two Cessna C172, registered PK-MSH and PK-MSN with 3 more aircraft to join the fleet in 2011. Ground school for cadet pilots are conducted at the Merpati Training Centre in Surabaya, and flight training is conducted from Budiarto Airport, Curug (near Jakarta) as well as Trunojoyo Airport, Sumenep on the island of Madura.