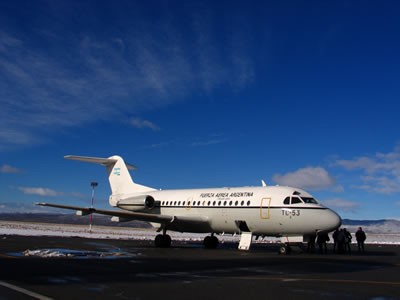 The Fokker F28 Fellowship is a short range jet designed and built by Dutch manufacturer, .

Announced by Fokker in April , production was a collaboration between a number of European companies, namely , MBB of , Fokker-VFW (also of Germany), and of . There was also government money invested in the project, with the Dutch government providing 50% of Fokker's stake and the German government having 60% of the 35% German stake.

Projected at first to transport 50 passengers to 1,650 km, the plane was later designed to have 60-65 seats. On the design sheet, the F28 was originally to mount Bristol Siddeley BS.75 turbofans, but the prototype flew with the lighter Rolls-Royce "Spey Junior", a simplified version of the Rolls-Royce Spey.

The F28 was similar in design to the and , as it had a and the engines on the back of the fuselage. The plane had, although slightly, wings with crescent angle of sweep with s at the tip, simple and five sections (external and internal) s. The was fix and its was realized with hot water. The tail cone could split and be hydraulically opened to the sides to act as a variable . It had a retractable tricycle landing gear.

Final assembly of the Fokker F28 was at in .

The F28-1000 prototype, registered PH-JHG, first flew on (exactly one month later than the famous . German certification was achieved on , . The first order was from German airline , but the first revenue-earning flight was by on who operated five F28s. The aircraft layout, with t-tail and two Rolls-Royce Spey 550 engines mounted on the rear fuselage made it similar to its contemporaries, the and .

The most successful F28 was the F28-4000, which debuted on , with the world's largest Fokker operator, . This version was powered by quieter Spey 555-15H engines, and had an increased seating capacity (up to 85 passengers), a larger wingspan with reinforced wings, a new cockpit and a new interior. The F28-3000, the runner-up for the F28-1000, featured the same improvements as the F28-4000.

By the time production ended in , 241 airframes were built.

* F.28 Mk 3000 - With the shorten fuselage of Dash-1000, it was one the more successful variants. Greater structural strength and increased fuel capacity. It began revenue service with .

As with most aircraft types, the Fokker F28 has an average number of accidents or incidents: