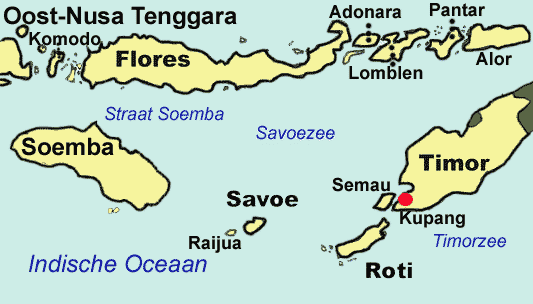 Alor is the largest in the located at the eastern-most end of the that runs through southern , which from the west include such islands as , , , Komodo, and .

To the east of the island across the lie the islands of and , the latter belonging to . To the south, across the , lies the western part of . To the north lies the . To the west lies and the other islands of the Alor archipelago, and further yet the rest of the .

Alor has an area of about 2800 km², making it the largest island of the Alor archipelago.

is the only town on the island of Alor, with a metropolitan population of about 60,000. The variety of goods obtainable in Kalabahi is surprising considering its size and location.

Alor is of volcanic origin and has very rugged terrain. The region near Kalabahi is the only flat area. This is why the Dutch placed the capital and the main harbor () of the area here in 1911.

"The best" and in can be found in the Alor archipelago. Due to intriguing and often very strong currents it is best to snorkel or dive with someone who knows the area well.Transportation to Alor by TransNusa Trigana Air, from Kupang, Denpasar and Surabaya.

The island's infrastructure is only weakly built. The inhabitants practice mainly subsistence agriculture. The government seeks to change this with the help of international organizations. In the villages , , s and other nuts are cultivated. In the forests is cut down for trade.

The latest geological explorations have discovered valuable resources such as , , , , , , and .

Alor's highly-esteemed snorkeling and diving promise an increase in tourism in the future. Depletion of the fisheries has however damaged the s in recent years.

Over 168,000 people live on Alor. Three-fourths are , the rest are either s or in a few villages s. Animistic rites and traditions are still strongly practiced.

More than 15 different indigenous languages are spoken on Alor, the majority of them classified as Papuan or non-Austronesian. These include , Adang, Hamap, Kabola, Kafoa, Woisika, Kelon, and Kui. In addition, Alorese (Bahasa Alor; ISO 693-3: aol) is a which is spoken along the coast of the western and southern Bird's Head of Alor Island and in places on surrounding islands.

Many of the Papuan languages of Alor are endangered and are no longer being actively acquired by children. Some languages have fewer than 1000 speakers remaining. Significant linguistic documentation efforts have been undertaken recently by Leiden University.

The language of daily communication is Alor Malay, a unique Malay variety with some similarities to Kupang Malay. Indonesian is taught in schools and used widely in media.

During the , Kalabahi is serviced by flights five times a week from the provincial capital, using a [ATR42] 46 seat by TransNusa Trigana Air and 18 seat airplane. These flights are run by Merpati Airlines. Most of them are simply Kupang - Kalabahi - Kupang, but mid-2003 a new flight Kupang - Kalabahi - - Ambon, returning the next day, was introduced. The two Pelni passenger ships Serimau and Awu also pass through Kalabahi each week. Transport to Alor during the is sometimes disrupted due to high winds and large waves.

On the 17th November, 2006 Trigana Air suffered its first ever plane crash accident. The aircraft (a de Havilland Canada DHC-6 Twin Otter 300) struck a mountain in Puncak Jaya (Indonesia) seven minutes before it was scheduled to land in the remote Indonesian province of Papua. All the 12 passengers onboard died shortly after the incident.