The Fokker 100 is a medium size twin-turbofan airliner from the Fokker company. Low operational costs and almost no competition in the 100-seat short-range class made it a best seller when it was introduced in the late 1980s, but decayed due to increasing competition. Production ended in 1997 with 283 airframes delivered. In August 2009, 229 Fokker 100 aircraft remained in airline service with 47 airlines around the world.[1]

The Fokker F28 Mk 0100 program was announced in 1983 as an updated replacement for Fokker's popular, but superseded F28 Fellowship design. Marketed as the Fokker 1000 the design was based on the original F28 but features modern avionics, new generation Rolls-Royce Tay turbofan engines and a redesigned wing. However the most noticeable difference was the longer fuselage, which increased seating by 65% from 65 in the original F28 series to a maximum of 107 in a three-by-two single-class arrangement. The new wing is claimed by Fokker to be 30% more efficient in cruise, while still keeping the simplicity of a fixed leading edge. The cockpit was updated with a Rockwell Collins DU-1000 EFIS. Like the Fokker Fellowship, The Fokker 100 features twin rear fuselage-mounted engines and a T-tail, similar to that of the Douglas DC-9 family. The Fokker 100 does not have eyebrow windows above the main cockpit windows as on the Fokker F28.

Two prototypes were built - the first, PH-MKH, flew for the first time on November 30, 1986, and the second, PH-MKC, followed on 25 February 1987. The type certificate was awarded in November 1987. The first deliveries of the TAY620-15 powered versions started to Swissair in February 1988. American Airlines (75 aircraft ordered), TAM Transportes Aéreos Regionais (now TAM Airlines) (50 aircraft) and US Air (40 aircraft) were major customers of the Fokker 100 and their aircraft were powered by the more powerful TAY 650-15. 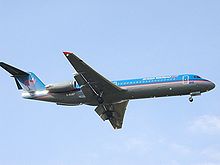 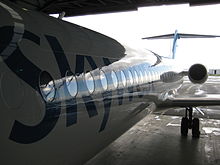 Skywest Airlines Fokker 100 side view, during maintenance at Perth Airport 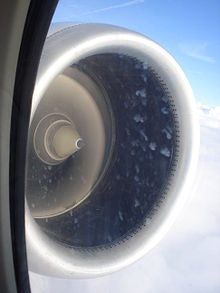 By 1991, Fokker had produced 70 units and had orders for more than 230. An extended range version with additional fuel tanks in the wings was introduced in 1993, and a quick-change passenger/freighter version in 1994, the 100QC. A shorter version was introduced in 1993 as a replacement for the earlier F28, known as the Fokker 70, which removed 4.70 m (15.42 ft) of the fuselage and reduced seating to 80. Studies on the 130 seat Fokker 130 and the Fokker 100QC (freighter) did not reach further stages of development. A Fokker 100EJ (Executive Jet) was introduced in 2003 as a conversion from used Fokker 100 aircraft.

Although the design was a success in the marketplace, Fokker continued to lose money due to mismanagement. Eventually their parent company, Daimler Benz Aerospace, shut them down. Fokker collapsed in 1996 and wound up production in early 1997. There had been some discussion about the company being purchased by Bombardier, but the plans fell through.

An Amsterdam-based group, Rekkof Restart (Rekkof is Fokker spelled backwards) negotiated to re-open the Fokker 70 and 100 lines in 1999, but the deal never completed. Stork B.V. acquired the maintenance business for the aircraft and operated it under the name "Fokker Aviation".[2]

Like any number of designs, the 70/100 was being increasingly squeezed from below by stretched versions of the Bombardier and Embraer regional jets, which also killed off plans for the Fairchild 728JET/928JET and an unnamed design from ATR. A proposed stretch version called the Fokker 130 was never built.[2]

As of November 2011, 168 aircraft are still in operational use with the following airlines: