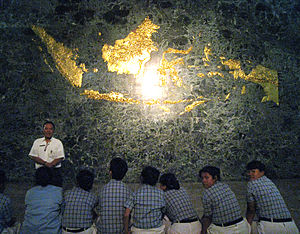 Nusantara is an Indonesian word for the Indonesian archipelago.[1] It is originated from Old Javanese and literally means "archipelago".[2]

The word Nusantara was taken from an oath by Gajah Mada, as written on an old Javanese manuscript Pararaton and Negarakertagama.[3] Gajah Mada was a powerful military leader and prime minister of the Majapahit Empire who was credited with bringing the empire to its peak of glory. Gajah Mada delivered an oath called Sumpah Palapa, in which he vowed not to eat any food containing spices until he had conquered all of Nusantara under the glory of Majapahit.

Nusantara is a Javanese word which appears in the Pararaton manuscript. In Javanese, Nusantara phrase meaning "outer islands" (from nusa, "island"). Based on the Majapahit concept of state, the monarch has the power over three areas:

The first appearance of Nusantara concept in 20th century 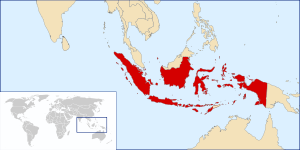 modern Nusantara as exposed by Setiabudi

In the year 1920, Ernest Francois Eugene Douwes Dekker (1879-1950), who was also known as Setiabudi introduced a name for his country (Indonesia) which didn't contain any words etymologically inherited from any Indian languages.[4] This is the first instance of the term Nusantara appearing after it had been written into pararaton manuscript.

The definition of Nusantara introduced by Setiabudi is different to the 14th century definition of the term. During the Majapahit era, Nusantara described vassal areas to be conquered. Setiabudi didn't want this aggressive connotation, so he defined Nusantara as all the Indonesian regions from Sabang as far as Merauke.

Palapa Oath (where the term Nusantara was first used) is in reality the embryo of the modern unitary state of the Republic of Indonesia, notwithstanding the fact that the territory of Majapahit was then even much wider than the current territory of Indonesia.[5]

Today in Indonesian, Nusantara is synonymous with Indonesian archipelago or the national territory of Indonesia, in this sense the term Nusantara excludes Malaysia, Singapore, Brunei and the Philippines. While in Malaysian this term is synonymous and often interchangeable with Malay archipelago or Malay realm (Malay: Alam Melayu) which includes those countries.

The Nusantara Society in Moscow conducts studies on the Nusantara region's history, culture, languages and politics.